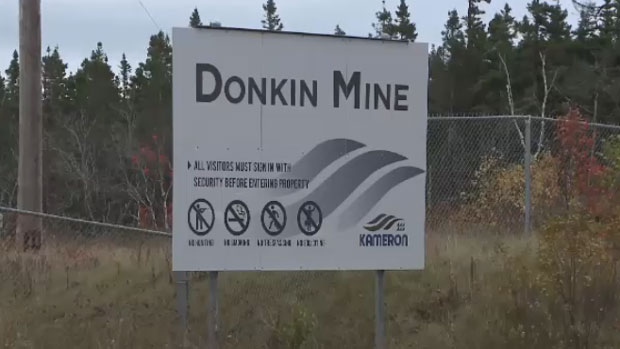 Labour Department inspectors have been sent to the mine, and work on the area where the ignition occurred has been suspended as investigations are carried out.

DONKIN, N.S. -- A Cape Breton colliery has been issued another stop work order after a methane fire occurred as coal miners worked on the rock face Tuesday afternoon.

Harold Carroll, the provincial Labour Department's executive director of occupational health and safety, confirms the ignition of the underground gas at the Donkin mine and says there were no injuries as a result of the flames.

He says inspectors have been sent to the mine, and work on the area where the ignition occurred has been suspended as investigations are carried out.

It's the latest incident at the colliery operated by Kameron Coal, a subsidiary of U.S.-based Mining Corp., where a series of massive roof collapses last fall led to the temporary suspension of operations.

The flames occurred in an area of 730 metres of rock face that the Labour Department permitted to reopen for coal mining in January after the roof falls in December.

An email from Shannon Campbell, vice president of project development at the mine, says the ignition of the methane occurred at 2:30 p.m. while cutting sandstone in the upper part of the mining face, and the resulting flames were extinguished by its employees.

In an earlier interview, Carroll had said the fire occurred Tuesday night.

Campbell said the crew "used handheld fire extinguishers to put out the fire and managed the face conditions for about 60 minutes."

"The presence of sandstone as a conduit of methane in the face area is an understood phenomenon in the Sydney coal field," said the mine executive.

The company also noted "the Nova Scotia mining regulations require firefighting equipment in the face area for these specific reasons," and said that "regulation, training and action worked as planned."

"Kameron Coal will continue to work closely with the Department of Labour throughout the investigation to determine if any other mitigative measures could be implemented."

Mining continues in another 730-metre area of the mine known as the Bleeder Panel that was recently allowed to reopen by the department.

The mine, which runs deep under the Atlantic Ocean off Cape Breton's north shore, has received 16 fines for a variety of safety infractions since October 2017.

Fines to date have totalled $29,500 and include infractions ranging from unsafe operation of conveyor belts to accumulations of coal dust.

Carroll has said in interviews that the numbers of infractions is "unusually" high for a Nova Scotia firm, but should be seen in the context of a new operation in a highly regulated mine.