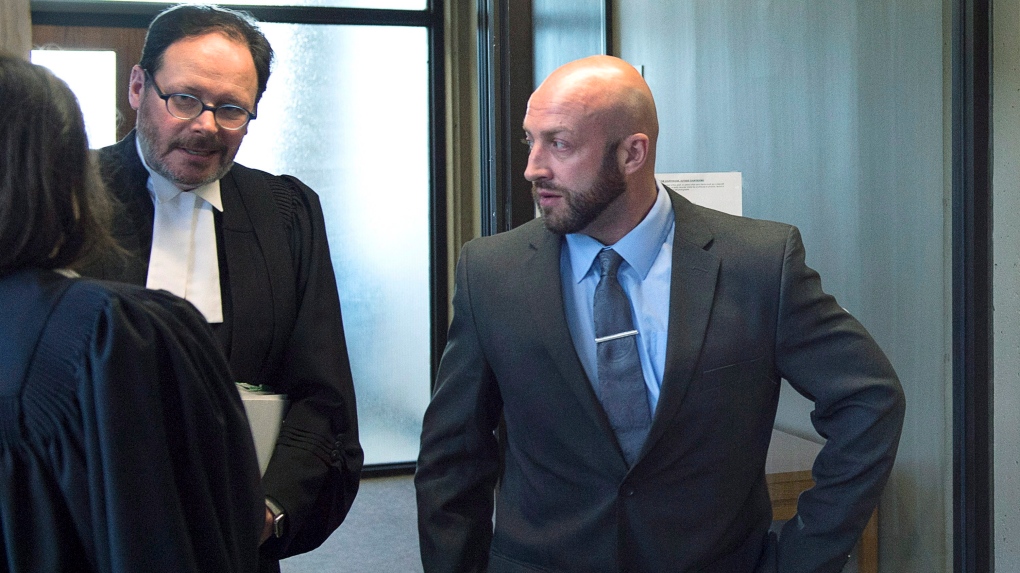 HALIFAX -- A military police officer who investigated an alleged group sexual assault at a Halifax-area military base told the trial of two British sailors Wednesday that the complainant was visibly upset during their interview.

Darren Smalley and Simon Radford are charged with sexual assault causing bodily harm and participating in a sexual assault involving one or more people in barracks at CFB Shearwater in April 2015.

Sgt. Tyler Bruce-Hayes, the Crown's first witness, told Nova Scotia Supreme Court that the complainant was crying when he first saw her at a Halifax hospital in the early hours of April 11, 2015.

Bruce-Hayes said he had received a call hours earlier that a sexual assault had occurred at Shearwater.

He said the woman, whose identity is protected by a publication ban, was examined by a nurse and swabs, urine and blood samples were taken. Later that night, he interviewed her for about two hours.

"There were parts of the interview that she was crying," said Bruce-Hayes. "She appeared to be upset."

Bruce-Hayes said following the interview, he went to the complainant's apartment, where he seized clothing including underwear.

The following day, a search warrant obtained for the barracks at Shearwater, where hockey players from the Royal Navy had been staying, said Bruce-Hayes. A number of items were seized, including electronic devices.

He said he eventually obtained DNA warrants to execute on four members of the British navy, who at that point were suspects in the alleged sexual assault. Two of those men were Smalley and Radford.

The complainant's underwear was sent for forensic testing, and it was determined there was a DNA profile detected that belonged to a male.

"One of the samples belonging to Mr. Smalley matched the DNA profile that was found on the victim's underwear," said Bruce-Hayes.

The court was also shown a short video clip of the complainant, another woman and two men sitting in a room with four beds. The video was taken on a GoPro camera that had been seized from the barracks at Shearwater.

Both Smalley and Radford, seated at a bench behind their lawyers, were taking meticulous notes during the proceedings.

A pre-trial decision issued by Justice Patrick Duncan said the men, members of the Royal Navy, were participating in a naval hockey tournament in Halifax in April 2015.

About six weeks have been set aside for the judge-alone trial.

Crown lawyer Eric Taylor has said he expects to call about 12 witnesses.