Mix of snow and rain expected for the Maritimes Thursday

Mix of snow and rain expected for the Maritimes Thursday

A combination of snow, rain and wind warnings have been issued for the Maritimes by Environment Canada.

In New Brunswick, a snowfall warning is in effect for much of the northern half of the province, where rapid snow accumulation is expected to make travel difficult Thursday.

Rainfall warnings extend across southwestern New Brunswick and across mainland Nova Scotia. For those areas, higher rainfall amounts may combine with snow melt to increase the risk of hydroplaning conditions and localized flooding.

Stronger gusts of 130 kilometres are expected Margaree Harbour to Bay St. Lawrence in Cape Breton due to the topography of the Highlands.

The strong wind will drive a rough and pounding surf on the coast and give a risk of scattered power outages.

Snow will arrive in western New Brunswick and southwestern Nova Scotia near midnight.

By early Thursday morning, a moderate-to-heavy snow will be falling across New Brunswick, Prince Edward Island, and northern areas of Nova Scotia.

Snow turning to rain along the Bay of Fundy coastline in New Brunswick and in western Nova Scotia. Central and northern areas of New Brunswick will see snow amounts climb to and in excess of 10 centimetres quickly.

Expect driving conditions to deteriorate just a few hours after the snow begins to fall. 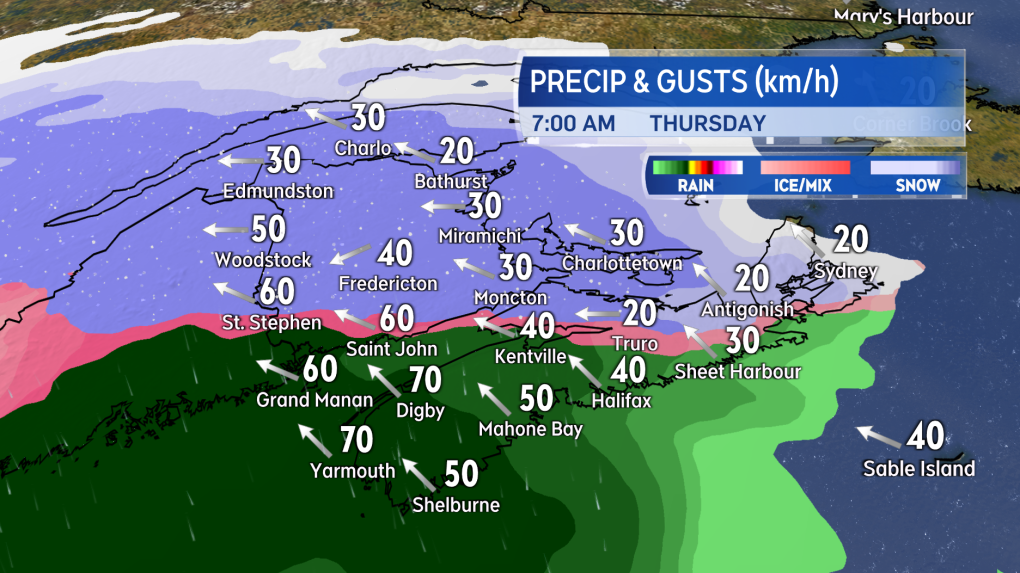 Snow and rain will quickly spread across the Maritimes Thursday morning.

Snow will have turned to rain by early Thursday afternoon for all but the northernmost area of New Brunswick.

Communities from Edmundston and Grand Falls, Campbellton-Dalhousie, and Bathurst will still be in a mix of snow, ice pellets and freezing rain. Precipitation rates will be high with visibility reduced and hydroplaning conditions on roads.

The wind will be prevailing from the south for most of the Maritimes. Gusts will have increased into a range of 50 to 80 kilometres per hour, except 80 to 100 kilometres on the coast and at higher terrain. 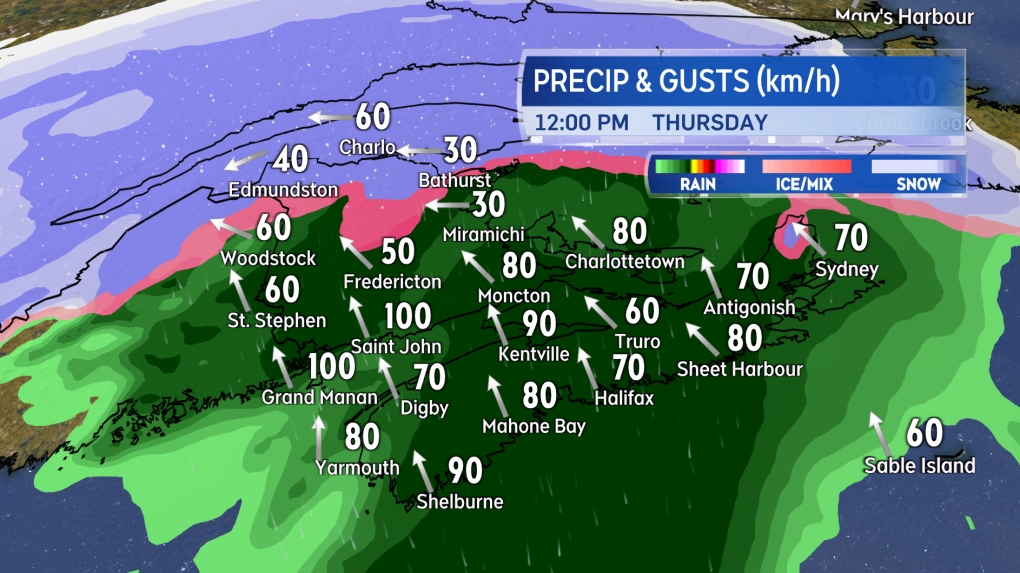 In the thick of the inclement weather, snow and rain rates will be high and southerly winds increasingly strong.

Rain and snow will ease to patchy areas of flurries, showers, and drizzle by late evening. The light and scattered precipitation will continue into the overnight hours.

Temperatures will fall back below freezing for all three Maritime provinces. 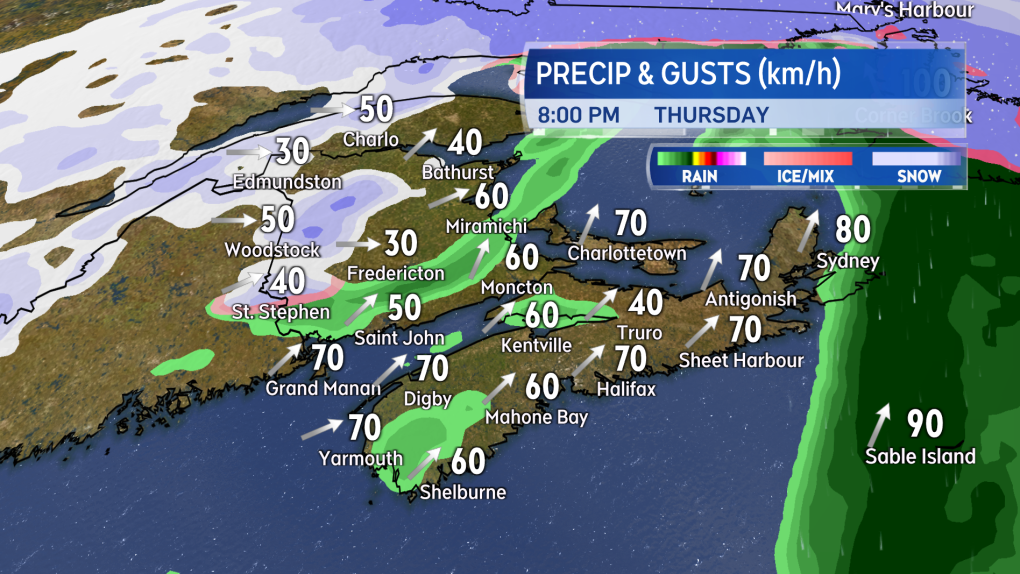 Precipitation becomes lighter and more scattered in coverage Thursday night. Icy surfaces are expected by Friday morning as temperatures fall back below freezing.

The most snow and ice pellet accumulation is expected in the area of New Brunswick from about Woodstock to Miramichi and north.

Snow amounts could reach 20 to 30 centimetres, even though some mixing in of freezing rain and rain looks likely, which will make for heavier snow removal.

Fredericton and central areas of New Brunswick could pick up an initial 10 to 20 centimetres of snow before the turn to rain.

Progressively lower snow amounts are expected for southern areas of New Brunswick, Prince Edward Island and Nova Scotia as the turn to rain will be quicker. 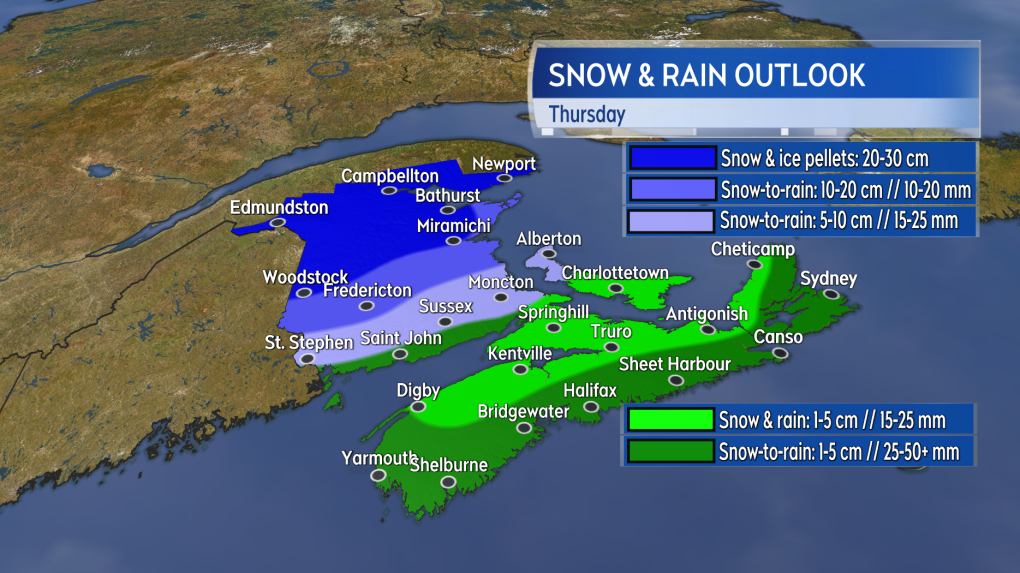 The most snow is expected in northern areas of New Brunswick, with much of the rest of the region seeing a quicker turn from snow to rain.

Cancellations are expected Thursday across the region given the deteriorating conditions. Travelers are reminded to check ahead before heading out.