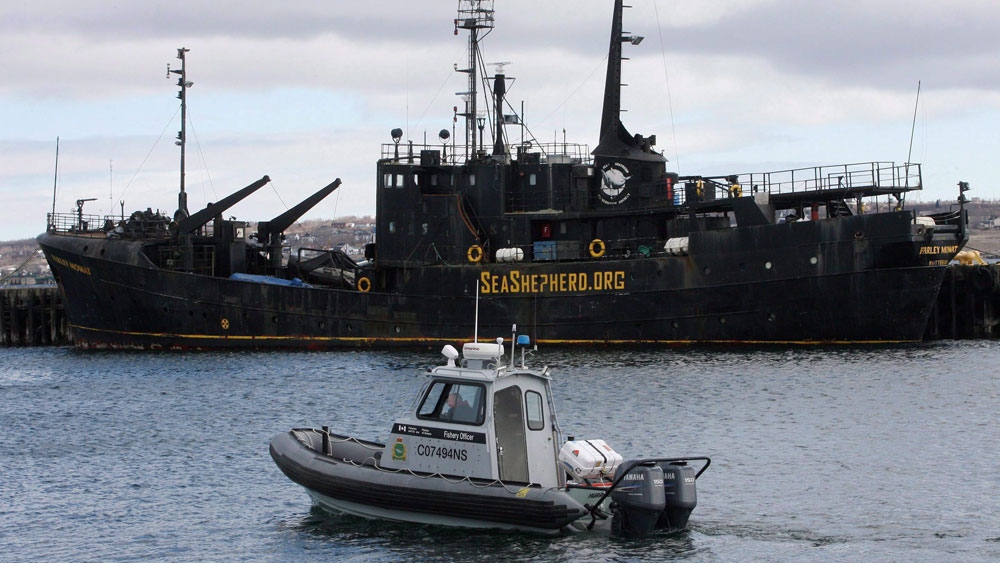 SHELBURNE, N.S. -- In the seven years since the MV Farley Mowat was seized at gunpoint by the RCMP, the once notorious flagship of the Sea Shepherd Conservation Society has become a festering eyesore on Canada's east coast.

The flat-black ship was part of a small, militant fleet commanded by Canadian environmental crusader Paul Watson, who at the time was described as a "terrorist" by former Newfoundland and Labrador Premier Danny Williams.

In Shelburne, N.S., the ship's latest port of call under the ownership of scrap dealer Tracy Dodds, the rusting, battered hulk is now the subject of a court battle that appears to be coming to a head.

Dylan Heide, the town's chief administrative officer, said contractors appear to be dismantling the ship after months of legal wrangling.

"We are seeing compliance so far," he said in an interview Tuesday. "The owner was there last week and he's been back today. He's preparing the boat to be removed."

The Federal Court of Canada decided last week that unless Dodds removes the ship from its berth in Shelburne by April 8, he faces a $5,000 fine and a maximum 20-day jail sentence at an April 13 hearing.

The ugly court battle, which follows Dodds' failure to comply with two previous court orders, marks an ignominious end for a vessel that was once at the centre of a sensational international incident involving a risky high-seas takedown.

Loyola Hearn, then federal fisheries minister, said the seizure would prevent "a bunch of money-sucking manipulators" from interfering with the centuries-old commercial hunt.

Watson, then in New York, said the arrests amounted to an "act of war."

He argued that his vessel -- registered in the Netherlands -- never entered Canada's 12-nautical-mile territorial limit, but Hearn said the Fisheries Act gave him the authority to take action beyond that line.

The Fisheries Department later said its 98-metre icebreaker CCGS Des Groseilliers was "grazed" twice by the Farley Mowat during a tense encounter on the ice-covered waters. But the conservation group insisted its ship was rammed twice by the icebreaker.

Watson's group has long used high-profile, vigilante tactics to stop hunters from killing seals, whales and other marine wildlife around the globe. Its logo is a stylized skull, much like a pirate's Jolly Roger.

The Farley Mowat's senior officers were released from a Cape Breton jail in April 2008 after the ship's namesake, Canadian author Farley Mowat, posted their $10,000 bail. The pair were later fined $23,000 each, though they were deported before they were sentenced.

As for the ship, the former Norwegian fisheries research vessel was sold for $5,000 in 2009 and was supposed to be refitted. But that never happened. It later showed up in Lunenburg in 2010 and then in Shelburne harbour in September 2014.

On June 25, 2015, the ship sank at its berth, forcing the Canadian Coast Guard to mount a $500,000 cleanup effort that saw the vessel refloated. More than 2,000 litres of pollutants were eventually removed from the hull.

Under the latest court order, Dodds must provide a list of the contractors who will be removing the ship and provide regular updates on their progress, which has happened.

The local member of Parliament, Liberal Bernadette Jordan, raised the issue of derelict vessels with the federal fisheries committee last month and she has tabled proposed legislative changes that would prohibit the abandonment.

Jordan's motion also recommends improving vessel registration and calls on Ottawa to assist in the removal of abandoned vessels in cases where they create an economic burden.

"The people in coastal communities have been waiting long enough for a resolution to this issue," Jordan said when the motion was tabled.

"I have witnessed the effect of these large abandoned vessels on public morale over the years and understand the very real economic burden they have as well."

Shelburne has had to deal with six derelict vessels in the past six years, though none have been as large as the Mowat, Heide said.

Currently, the federal government can only intervene in cases where an abandoned vessel is a threat to public safety, an environmental hazard or blocking a navigable waterway.

Transport Canada estimates that there are more than 600 abandoned vessels across the country.