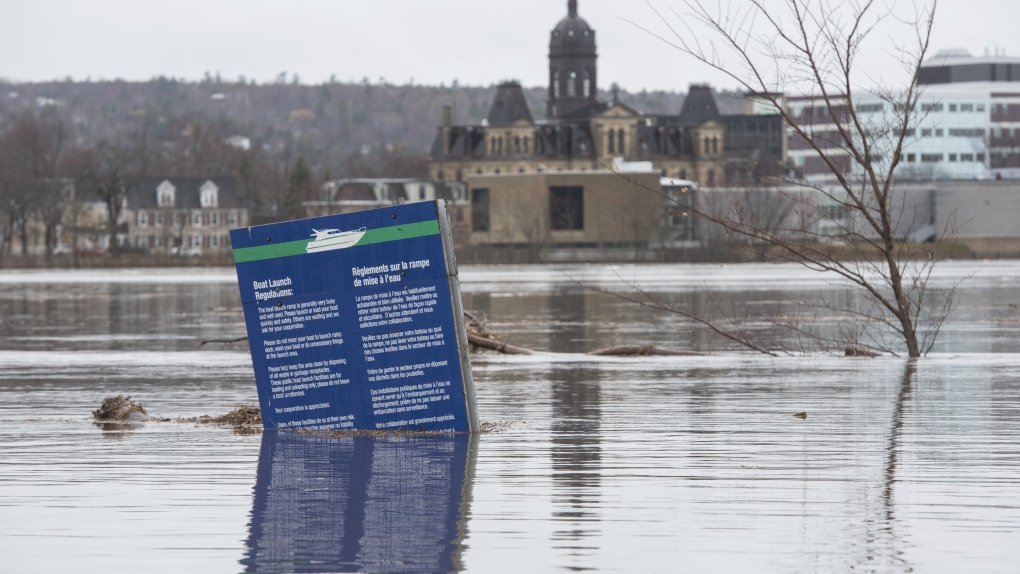 The New Brunswick Legislature is seen in the background of a boat ramp sign in Carleton Park surrounded by the flood water and debris from the St. John River in Fredericton, N.B. on Saturday, April 20, 2019. THE CANADIAN PRESS/Stephen MacGillivray

FREDERICTON -- New Brunswick's premier says his government will do what's necessary to protect citizens if there is spring flooding while the COVID-19 crisis is still underway, and that could mean calling in the military.

"We're watching it very closely and currently we've had melting conditions that are like a typical March. We hope that continues," Blaine Higgs said.

"We will be prepared to deal with a flood situation," he said.

He said the organization and its River Watch partners will adapt "to meet health and safety requirements, such as social distancing or working remotely."

Department spokeswoman, Anne Mooers, said ice remains in place in most rivers, and the focus at the moment is on "stopping the spread of the virus" by having all non-essential employees work from home.

Higgs says he has also spoken to the commander at Canadian Forces Base Gagetown to see if the military would be available to help if necessary.

"It's certainly an option available to us. I was very pleased with their participation last year," the premier said.

He said he hopes soldiers won't be needed this year, "but it's nice to know they're there if we need them," he said.

New Brunswick has experienced a number of years of record flooding along the St. John River, affecting properties and closing roads, including a section of the Trans-Canada Highway.

One of the hardest hit communities has been the Village of Gagetown.

Thane Mallory, who runs Gulliver's World Cafe in Gagetown, has relocated his restaurant to a building on higher ground to avoid being flooded out for the third year in a row.

But he is concerned the COVID-19 crisis may delay the permits he needs to open, even if it's just to provide take-out meals. "The government has pretty much ceased operations, and no one wants to see us for a while," he said. "That's certainly going to slow us down."

Mallory said the permits on his old location have expired and most equipment has been moved to the new location.

"We're kind of paralyzed in the whole thing because we need approvals before we can move ahead," he said.

This report by The Canadian Press was first published March 25, 2020.

Can I go for a walk during a global pandemic?

'We are collapsing': Virus pummels medics in Spain and Italy

How to isolate when someone's sick with COVID-19 at home

No haircuts or manicures: How Ontario's beauty industry is coping with COVID-19