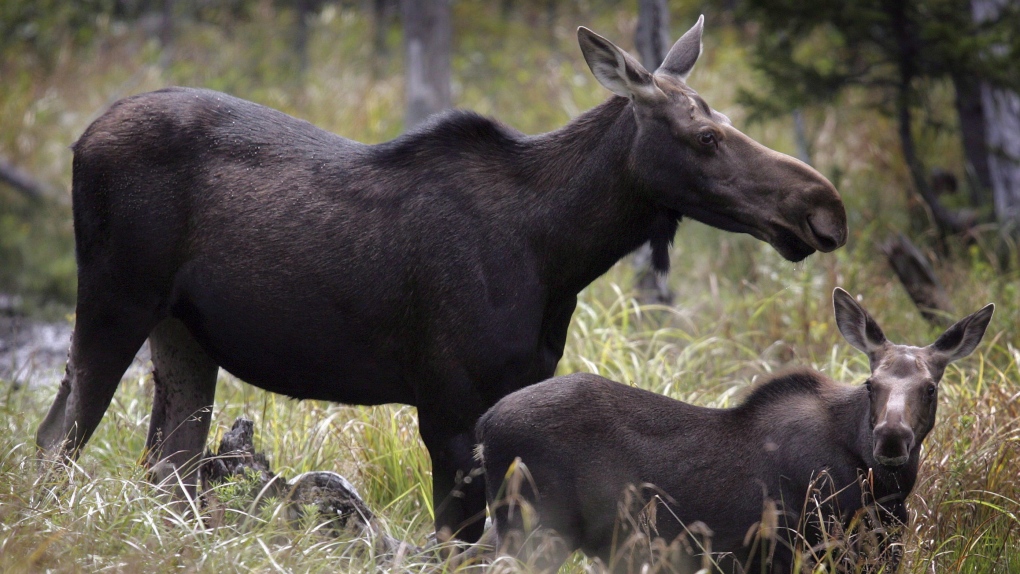 Moose graze in Franconia, N.H. in an Aug.21, 2010 file photo. Farmers in Newfoundland say they're taking on huge financial losses from hungry moose that have been damaging their crops with night-time feeding frenzies. THE CANADIAN PRESS/AP/Jim Cole

ST. JOHN'S, N.L. -- Hungry moose have been taking a bite out of the profits of farmers in Newfoundland, prompting calls for the province to help put an end to the night-time feeding frenzies.

Crop loss from munching moose been a long-standing issue in Newfoundland, where the massive herbivores were introduced in the 1900s. But it's become a heated political debate this fall, as farmers decry the end of a longstanding permit that allowed them to shoot the animals on their properties at night.

"Just about all farmers in the field crop area have been affected by it in one way or another," said Merv Wiseman, president of the Newfoundland and Labrador Federation of Agriculture.

Wiseman said the industry was not notified about the change, leaving farmers "sideswept" when they tried to obtain the licences. He said many of the affected farmers have bright lights on their properties, making visibility while firing at the animals a non-issue.

"It's not as if farmers are going willy-nilly killing these animals, not knowing what they're doing, discharging firearms in the middle of the night," Wiseman said.

Farmers can make use of other methods to keep the moose at bay, such as calling wildlife officers to respond or applying for a grant to assist in building fencing, but these have been criticized as too slow or otherwise ineffective.

Gerry Byrne, the province's minister of fisheries and land resources, said the permits were discontinued after a review of the Wildlife Act, which prohibits hunting at night.

He said the change was a preventative safety measure meant to align policy with the law, but after weeks of public discussion he said he's open to taking feedback on the issue.

"I'd be very ready and very willing to consult with people -- with farmers and with the people of Newfoundland and Labrador generally -- around this issue," Byrne said in an interview, adding he'd like to find a middle ground between public safety and the financial security of farmers.

Krista Chatman said she was one of the lucky ones this year, with some losses to a corner of her farm's cabbage crop that was nibbled away. But she's familiar with the path of destruction left behind in a farmer's field after a night-time visit from a hungry moose.

Chatman, who operates Three Mile Ridge farm in Lethbridge, N.L., said damage from pests is expected in the farming business, but moose are particularly destructive because of their size, strength and appetite. Chatman's family has tried installing tall electric fences around their property, but those haven't been effective.

"It's pointless. Every single day, every single morning, you're up repairing an electric fence that they just walk through. It doesn't deter them," she said.

The animals also aren't scared away by moving vehicles or noise, and Chatman said a moose can do significant damage by trampling a vegetable crop in search of the perfect morsel.

Chatman has taken advantage of the night licence before, and like Wiseman, said she'd support more training for farmers if the provincial government were to reinstate it. More recently, she's been in touch with licensed outfitters who will shoot an animal that's threatening the crops, which she said has helped.

A silver-bullet solution may be hard to find, but moose-related damage to crops could pose a setback to the province's goal of doubling its food self-sufficiency to at least 20 per cent by 2022.

Philip Thornley, who operates Campbellton Berry Farm in central Newfoundland, said he's struggled with moose feasting on his crops for 40 years, and he anticipates increased production will attract more.

He said the province should "grab the moose by the horns" in support of farmers, suggesting more subsidized fencing, compensation for farmers and bait crops to keep the animals away.

Whatever the solution, Thornley said it should go further than bringing back night shooting, which he argues is not a viable option for people who are already overworked and need to rest at night.

"I've already worked a 12-hour day during the daylight, I don't need to be out there after supper with a flashlight and a rifle," he said.

"There's got to be a solution that goes way beyond dumping more work on the farmer."

This report by The Canadian Press was first published Dec. 1, 2019.