HALIFAX -- Nova Scotia reported no new cases of COVID-19 on Wednesday and only five active cases of the virus.

“We have no new cases of COVID to report, no deaths, and there are no active cases in our long-term care,” said Premier Stephen McNeil during a news conference in Halifax Wednesday afternoon.

“This is a good day in Nova Scotia.”

“We introduced a lot of changes within the last week and it may take a couple of weeks to ultimately see the impact of that, in terms of our epidemiology, so we have to be watching things carefully and we need to keep our eye very closely on how things are evolving,” he said.

The province says 994 cases are now considered resolved. This leaves five active cases in Nova Scotia -- a number now confirmed by the province.

There are two people in hospital, both of which are in intensive care units.

Sixty-two per cent of cases are women and 38 per cent are men.

Data has been reconciled

During the pandemic, there has been confusion over the number of confirmed and recovered cases reported by the province, which haven’t always matched up with the numbers reported at Northwood.

The number of active cases hasn’t always made sense, either. On Sunday, the province was reporting 1,059 confirmed cases, 61 deaths and 999 recoveries, which would result in -1 active cases.

The province says the issue has now been resolved.

“The public health team has been working to reconcile and consolidate multiple data sources to ensure that all the publicly reported data comes from a single source, which is our electronic information system, Panorama,” said Chief Medical Officer of Health Dr. Robert Strang during Wednesday’s news conference.

“That work is now complete and our numbers today reflect that work. They’re the most up-to-date and comprehensive COVID-19 data and we’ve resolved all the discrepancies.”

The province says the change has altered some data points.

The total number of cases has increased by one case, from 1,060 cases to 1,061 cases, to reflect a Nova Scotian who tested positive for COVID-19, but who is not currently in the province and wasn’t tested in the province.

“Because of the way that we report things between provinces, they’re reflected in Nova Scotia numbers,” said Strang.

The “recovered” cases are now being referred to as “resolved” cases to more accurately account for all COVID-19 cases whose investigations are considered completed and closed by public health.

Change in breakdown of cases

The way the cases are broken down by the Nova Scotia Health Authority’s four zones have also changed, based on the new data.

The province says the breakdown of cases is now based on the zone in which a person lives, and not where their sample was collected for testing.

“That’s actually a more accurate representation of the geographic nature of where COVID-19 cases are occurring,” said Strang.

As a result, the number of COVID-19 cases in each zone has changed. 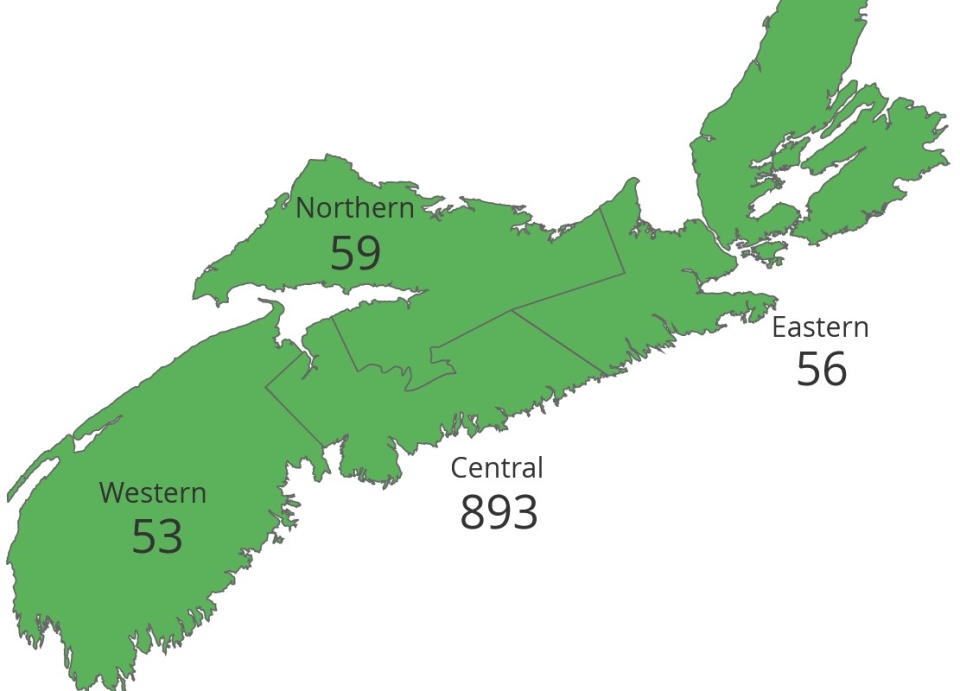 Since the COVID-19 pandemic began, Strang and McNeil have been updating the public by holding joint news conferences. The pair announced Wednesday that those news conferences would be on a two-week hiatus while Strang undergoes a minor surgerical procedure.

“I have a minor type of skin cancer, which is diagnosed and only spreads locally. It’s been removed, but I need another type of surgery that just can relook at things and make sure the margins of where it was removed are clear. That type of surgery is not yet available in Nova Scotia, so I have to go to New Brunswick for a minor procedure tomorrow. Which means, like all Nova Scotians coming back into Nova Scotia -- I’m no different than anybody else -- I have to follow the rules of 14-day isolation,” said Strang.

McNeil says he and Strang will continue to work on the next steps of reopening the province during Strang’s period of self-isolation.

“Dr. Strang is without a doubt an essential service in our province and he’s done a tremendous job helping guide us through the last number of months. His decision to self-isolate shows his integrity and how much he cares about the health and well-being of Nova Scotians,” said McNeil.

“We will provide updates in the case numbers every day online and news releases and, if there is a spike or a sign of trouble, we will be back here with the useful help of technology. Obviously we hope that doesn’t happen.”

Medical experts are increasingly of the view that a second wave of COVID-19 infections will spread across Canada at some point. Strang says measures like physical-distancing and handwashing will help to minimize the impact when a second wave happens.

“We had to act very quickly back in March and we kind of put the breaks on very hard and shut things down by necessity. We’ve learned a lot from that. We know much more about the virus,” says Strang.

“The hope would be that if we start to see a resurgence … that we can detect it early on. Then, if necessary, we can take a more focused and targeted approach. Whether it is based on a limited geographic area, or whether it’s based on one type of business, that we have to take back one or two steps of their recovery plan, that is the anticipation and that’s what we’re working towards. If we absolutely had a huge resurgence, and had to go back like we did in March, I would be advising that we do that, but the hope is that with earlier detection and with a build on our experience and knowledge, we would have a much more nuanced and targeted approach to limit the spread.”

Businesses forced to close under the public health order were able to reopen Friday. Strang and McNeil reiterated how critical the next two to three weeks are in understanding the impact of the province’s first steps in recovery.

“We are testing and monitoring as businesses are open and the incubation period for COVID is about 14 days. So we don’t know, for the last two weeks, if there has been any spread within our community. We also have daycares opening on Monday. They are at limited capacity, but kids are coming together for the first time since COVID started and we will monitor how that is going,” said McNeil.

“We seem to be moving in the right direction and we can’t stop now. Please continue to follow the protocols. Keep your distance, wash your hands, wear a mask when you feel it’s necessary, don’t go out if you are feeling sick, but if you’re feeling good get outside. And don’t forget, think local, buy local, support local, stay safe, stay strong, we’ve got this.”

Ethical dilemma: Who should get a COVID-19 vaccine first?

190,000 Canadians who received CERB payments have had to repay them, CRA says

Pattie Lovett-Reid: Early CERB applicants are about to see their financial lifeline come to an end

Minimize the risk: Rules to get you through the pandemic

Six reminders the COVID-19 pandemic is far from over

Minimize the risk: Rules to get you through the pandemic

How to safely have friends and family over amid COVID-19