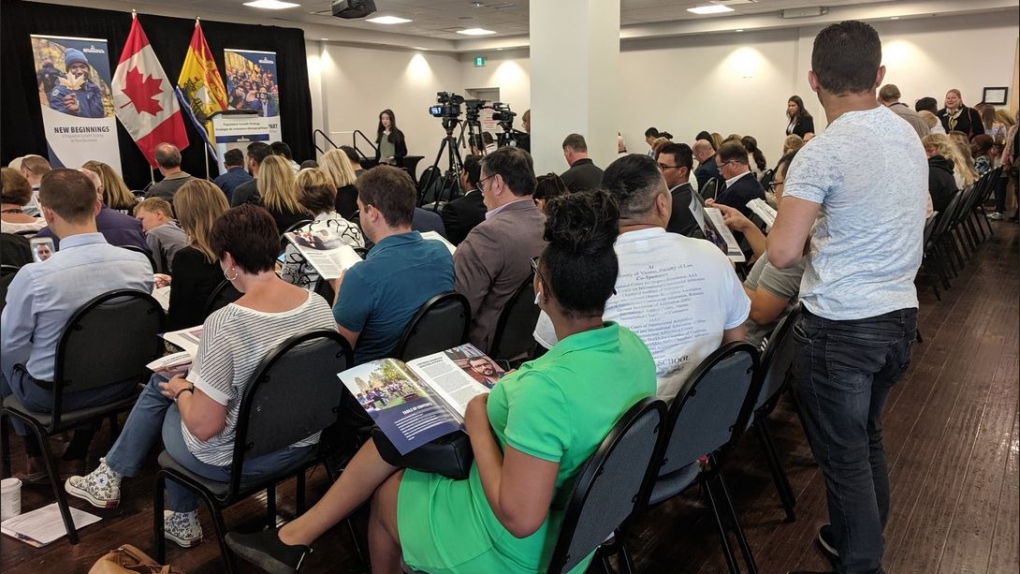 The Progressive Conservative government says its goal is to attract skilled workers and entrepreneurs to align with New Brunswick's labour market needs, while creating an environment in which newcomers can settle and succeed. (CTV ATLANTIC / LAURA LYALL)

FREDERICTON -- New Brunswick is aiming to more than triple the number of immigrants to the province, hoping to reach 7,500 a year by 2024.

The goal of bringing the annual immigration intake to about one per cent of the province's population is included in a new five-year provincial government population growth strategy and action plan released today.

In addition to attracting new immigrants, the strategy seeks to ensure newcomers remain in the province, targeting a one-year retention rate of 85 per cent by 2024.

The province will also seek a greater proportion of French-speaking immigrants.

The Progressive Conservative government says its goal is to attract skilled workers and entrepreneurs to align with New Brunswick's labour market needs, while creating an environment in which newcomers can settle and succeed.

Labour Minister Trevor Holder says population growth is crucial to the future success of the province.

"The attraction and retention of new Canadians is critical to helping us increase our province's population and meet the needs of our employers," Holder said in a news release.

Moncef Lakouas, president of the New Brunswick Multicultural Council, said the strategy delivers ambitious goals that will lead to economic growth and prosperity.

"When newcomers are fully included in all aspects of society, they become partners in growing our economy and enriching the social and cultural life of our province," Lakouas said.

Through a strategy released by the previous Liberal government, the number of immigrants who came to New Brunswick each year was increased from 625 to 2,291 between 2014 and 2017. The province's target this year is 2,100.

With roughly 770,000 people, New Brunswick has the third smallest population in Canada. The new strategy points out that between 2013 and 2018, it was second last among the provinces and territories in population growth at 1.6 per cent.

It says significant interprovincial migration loss, particularly among youth, and low birth rates are restricting the province's ability to grow.

"International migration is a key strategy to lessen the impact of this decline," the strategy document says.

From 2018 to 2027, New Brunswick is forecast to have about 120,000 job openings, and approximately 13,000 of those will require workers from outside the province, because not all of the jobs can be filled by local labour.

Among a series of 60 actions promised by the province is increased collaboration with professional organizations and business sectors to improve foreign credential recognition and to identify barriers to certification for in-demand trades.

The government also plans to initiate public information efforts aimed at breaking stereotypes or misconceptions about immigrants, while stressing the demographic realities in the province.

3) continue trying to reach 2% annual increase in French speaking immigrants to achieve 33% by 2024.