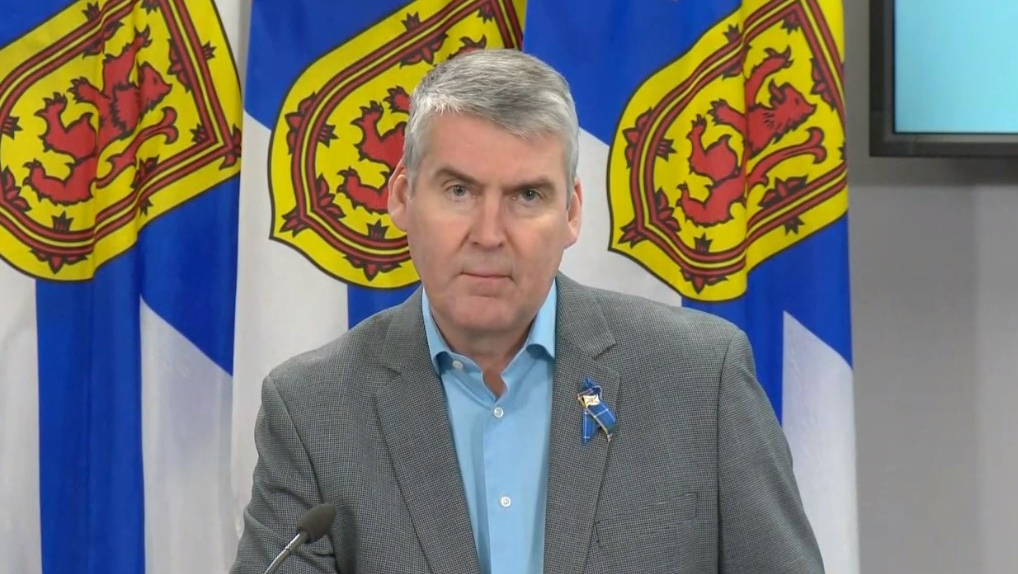 Nova Scotia Premier Stephen McNeil provides an update on COVID-19 during a news conference in Halifax on April 23, 2020.

The province has not announced any additional deaths.

In a news conference on Friday, Nova Scotia’s Chief Medical Officer of Health Dr. Robert Strang said one of the cases reported on Thursday was related to an individual living in a homeless shelter in HRM.

“We have a vulnerable population’s team working in government across departments. They rapidly were able to find individual housing in a hotel for the rest of the people in the shelter who are considered contacts. They are being tested,” said Strang.

“Today we are putting together a comprehensive response plan for this individual and all their known contacts.”

Strang said the province is looking at how to work with the homeless population in HRM, knowing that there’s most likely a covid virus circulation within that population.

As of Thursday, 10 licensed long-term care homes and unlicensed seniors’ facilities in the province had confirmed cases of COVID-19, involving 189 residents and 82 staff.

The confirmed cases range in range from 10 to over 90.

Eleven people are in hospital. Three patients are currently in intensive care units.

Nova Scotia says 392 cases in the province have recovered and are now considered resolved.

While most cases in Nova Scotia have been connected to travel or a known case, community spread has been confirmed, which is why travel has been removed as a requirement for testing.

There are confirmed COVID-19 cases across the province. More details are available in an online map, which breaks down the cases according to the Nova Scotia Health Authority’s four zones.

Most of the cases are confirmed in the central zone, which contains the Halifax Regional Municipality.

Public health is working to identify and test anyone who may have come in close contact with a confirmed case. Individuals who have tested positive are being told to self-isolate at home for 14 days.

Anyone who travelled outside of Nova Scotia is required to self-isolate for 14-days upon return.

COVID-19 symptoms to screen for

The symptoms for which COVID-19 is being screened have recently expanded.

Anyone with two or more of the following symptoms is asked to take an online questionnaire to determine if they should call 811 for further assessment.

COVID-19 symptoms to screen for:

Nova Scotia Premier Stephen McNeil announced on Friday the small business credit support program is now available for small businesses who do not qualify for the federal CEBA program.

“This new stream provides a guaranteed credit union loan and small cash grant of up to $1,500 for those who have lost 30 per cent of their sales revenue,” said McNeil.

“Businesses will also receive access to free professional advice to help adapt and recover from the impacts of COVID-19.”

McNeil also announced a commercial rent deferral for small businesses that have temporarily closed, or experienced at least a 70 per cent revenue decline because of COVID-19.

“These programs are designed to put money in the pockets of our small businesses as quickly as possible to help them find their way back when we get through COVID-19,” explained McNeil.

WHO warns against 'immunity passports' as a ticket out of lockdown

'Herd immunity': Why this risky goal isn't practical for COVID-19