HALIFAX -- An elderly man from the Halifax area is Nova Scotia’s third death resulting from COVID-19.

The province said Monday that the man was in his 80s and had underlying health issues.

He died in the Halifax Regional Municipality on Monday.

Health officials wouldn’t provide any further details, including whether the man died in hospital.

“Tragically this weekend, we have another Nova Scotia family who are suffering a loss due to COVID-19,” said Premier Stephen McNeil during a news conference in Halifax Monday afternoon.

“On behalf of all Nova Scotians I want to express to you our deepest sympathies and condolences and I want you to know that we as a province are grieving with you and are here to provide any kind of support that we can.”

Both women had underlying health issues and died at the Cape Breton Regional Hospital in Sydney, N.S.

Chief Medical Officer of Health Dr. Robert Strang said last week that the women were admitted to the hospital on the same day, but that their cases weren’t connected.

The province also reported 29 new cases of COVID-19 on Monday, bringing the total number of cases in Nova Scotia to 474.

The QEII Health Sciences Centre's microbiology lab completed 947 tests on Sunday and is operating around the clock.

There are currently nine people in hospital. Four of those patients are in intensive care units.

The province says 101 people have recovered from the virus and their cases are considered resolved.

There are cases across the province. More information is available in an online map, which breaks down the number of cases by the Nova Scotia Health Authority’s four zones.

The central zone, which includes the Halifax Regional Municipality, has seen the largest number of cases: 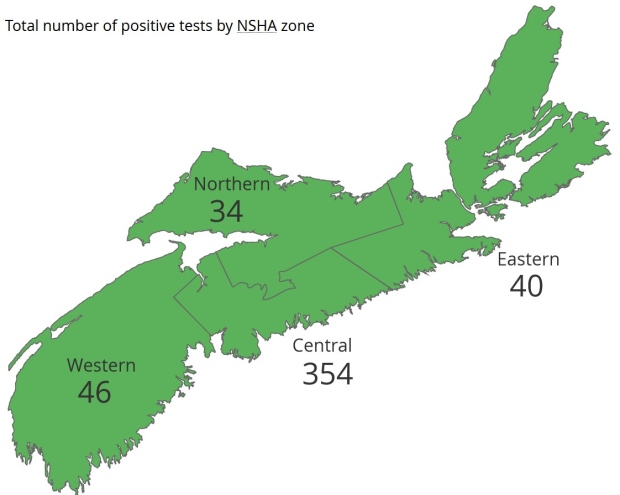 Public health is working to identify and test people who may have come in contact with the province’s confirmed cases.

Most cases are connected to travel or a known case of COVID-19, but community spread of the virus has been confirmed in the province.

As a result, travel is no longer a requirement for COVID-19 testing.

Anyone who has two or more of the following symptoms is encouraged to take an online questionnaire to determine if they should call 811 for further assessment:

Anyone who has COVID-19 must self-isolate at home, away from the public, for 14 days.

Anyone who travelled outside Nova Scotia is also required to self-isolate.

Dr. Robert Strang said Monday that while the number of cases continues to rise in Nova Scotia, more tests are being conducted, and most people are testing negative for the virus.

“We may have seen over the last week that people may be concerned that our case numbers have increased and we tend to have around 30 a day over the last week, but I see that as actually a sign of some good news,” said Strang.

He noted that the province has recently expanded COVID-19 testing and is now testing over 800 people most days, so the number of people who are testing positive for the virus is relatively low, compared to the number of tests being conducted.

Strang also said it appears that the Nova Scotia numbers may have hit a plateau.

“While our numbers per day have increased … they don't continue to climb. That's also a sign that gives me some encouragement,” said Strang.

Strang said he believes the combination of public health measures, expansion of testing, and “aggressive follow up” with COVID-19 cases and their contacts is having a significant impact on minimizing the spread of the virus in Nova Scotia.

“What we’re doing is working. However, it’s too early to confirm for us to say, well, now we can start to relax,” said Strang.

“We’re not out of the woods yet. We have a few tough weeks ahead of us that we still have to be really vigilant.”

Canada establishes its own PPE supply chain in China amid pandemic

With many COVID-19 deaths in nursing homes, Tory MP asks whether economy can reopen

Ontario plans to extend state of emergency by 28 days

Truth Tracker: No, COVID-19 has nothing to do with 5G technology

COVID-19 to have 'immediate and drastic' impact on Canadian meat supply: industry group

Rats! COVID-19 is bringing another problem to Canadian streets