HALIFAX -- There has been another death connected to COVID-19 at the Cape Breton Regional Hospital.

The Nova Scotia government announced the death Thursday. This is the second COVID-19 death in the province.

The woman was in her 90s and had underlying medical conditions. She died at the hospital in Sydney, N.S. on Wednesday.

Premier Stephen McNeil and Chief Medical Officer of Health Dr. Robert Strang expressed their condolences to the woman’s family during a news conference in Halifax on Thursday.

“On behalf of all Nova Scotians to the family, there are no words and really no ability for us to understand what you’re feeling today, but I want you to know that we as a province are here for you,” said McNeil.

“We will be thinking about you over this Easter weekend as you grapple with your loss. We will be there with you, trying to somehow understand it, but also to support you. We are wrapping our arms around you.”

“The loss of a loved one is difficult at any time, but losing a family member at a time when we are being asked to stay separated must be especially challenging,” added Strang.

This is the second COVID-19 death at the Cape Breton Regional Hospital and the province’s second death connected to the virus.

The province reported its first COVID-19 death on Tuesday. The woman was in her 70s and had underlying medical conditions. She died at the hospital on Monday.

Strang said Thursday that, while the deaths occurred at the same hospital, the two cases are not connected.

He said the women were admitted to the Cape Breton Regional Hospital on the same day, but they lived in different parts of the community, and had no known connection to each other.

As Nova Scotia announced its second death, the premier and Strang again expressed their frustration over reports of residents breaking the rules -- especially those who continue to line up outside stores and fail to distance themselves from others.

Strang said he is “baffled” that some people are putting themselves and others at risk and urged residents to use “common sense when shopping.”

McNeil had strong words and a stern warning for those who aren’t following the province’s public health orders.

“As long as Nova Scotians continue to act irresponsibly … this pandemic is going to continue to go on,” said a noticeably angry McNeil.

“This absolutely makes no sense. I'm going to tell you, we just announced to a second Nova Scotia family today who lost a loved one due to this virus. How many more Nova Scotians are going to have to die before people understand this is a deadly virus? This is frustration, let me tell you, no matter how hard we work, no matter how hard most Nova Scotians do this, if people continue to show this behaviour, we're going to continue to see deadly results from this virus.”

The QEII Health Sciences Centre's microbiology lab completed 980 tests on Wednesday and is now operating around the clock.

Eighty-two people have recovered from the virus and their cases are considered resolved.

There are cases in communities across the province. More information is available in an online map, which breaks down cases according to the Nova Scotia Health Authority’s four zones.

The zones indicate where the testing was done, and not necessarily where the individuals live.

While most cases in the province are connected to travel or a known case, there is community spread.

As a result, travel has been removed as a requirement for COVID-19 testing.

The province has also expanded the list of symptoms for which people are being screened.

Anyone who has two or more of the following symptoms is asked to take an online questionnaire to determine if they should call 811. 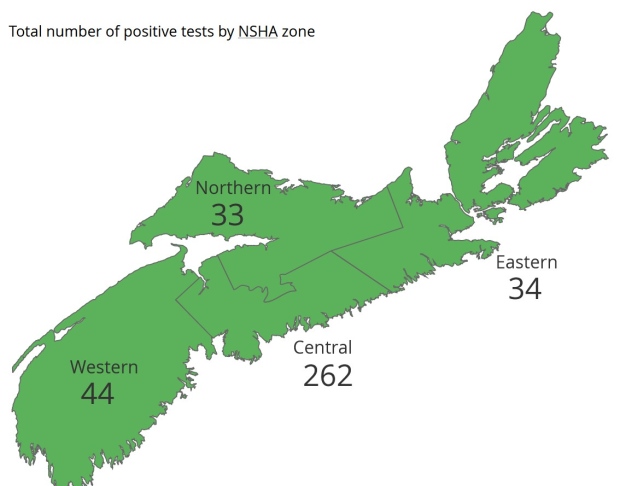 Strang noted that 811 and the COVID-19 assessment centres will continue to operate over the Easter weekend and people shouldn’t wait until after the holiday to find out if they should get tested.

Anyone who travelled outside Nova Scotia must also self-isolate for two weeks.

Workers in fishing and offshore industries must self-isolate

Strang said Thursday that his Health Protection Act has been amended in terms of workers who must self-isolate when they enter the province.

Certain workers are exempt from the self-isolation order, such as truck drivers who must move goods into and across the provinces.

Now, anyone who enters Nova Scotia to work in the fishing and offshore industries must self-isolate when they enter the province.

Strang said fishers can self-isolate on their vessel, if possible. If they need supplies, he said they should dock their boat and have them delivered to the dock.

“The provincial government is working with the agriculture sector and other industries as necessary to develop the appropriate capacities to ensure adherence to this 14-day self-quarantine period,” he said.

Applications for the $40-million Worker Emergency Bridge Fund and Small Business Impact Grant will be available and accepted starting Friday.

Applications for small businesses will be online at 8 a.m. Friday.

Payment for more than 480 small-business fees will be deferred until June 30.

The province also announced Thursday that the camping season is delayed.

All provincial parks and campgrounds, including private campgrounds, must remain closed until at least May 1.

The province will reassess the situation at that time.

The province is launching an enhanced 211 service at 9 a.m. Saturday to connect people who need assistance with the Canadian Red Cross.

The Canadian Red Cross is also offering wellness check-ins for Nova Scotians who are isolated and experiencing loneliness and anxiety.

McNeil also reiterated that services provided by shelters, Kids Help Phone, and the Nova Scotia mental health crisis, are available at all times.

When can we expect life to return to normal?

Strang said Thursday that Nova Scotians can probably expect the first wave of the pandemic to last roughly 10 weeks, followed by a slow decrease in cases.

“It’s likely we’re into June before we can think about starting to lift some of the measures that we’ve had to put in place,” he said. “What that exactly looks like, I don’t know for sure.”

Strang said he expects people will be able to become a bit more active in their communities, but this summer will look different than most.

“People need to understand that that has to be done slowly. It's not just all of a sudden we can flip the switch back on,” he said.

Strang said it’s possible there could be a second wave in the fall, and even a third wave in 2021, though they likely won’t be as severe as the first wave.

“I think the overall message is that there is no short-term solution here, that this is likely to be something that waxes and wanes over the next 12 to 18 months, and also therefore our restrictions are going to be tightened and loosened perhaps several times over the coming months,” he said.

With the Easter weekend approaching, McNeil and Strang urged Nova Scotians to connect with each virtually over the holiday, and not in person.

“These religious ceremonies will need to be very different. No in-person services, gatherings or meals,” reminded Strang.

“I would encourage all Nova Scotians, regardless of their faith or point of spiritual connection, to see that, as challenging as the pandemic is for you, your family and your community, there is hope and we will recover.”

McNeil said anyone who tries to enter Nova Scotia over the weekend will be questioned as to why they are entering the province, unless they are providing an essential service.

One visitor who is allowed to enter the province, however, is the Easter Bunny. McNeil reassured Nova Scotians that he does provide an essential service and will be welcomed.