Dave Piccott, 79, was recently in a serious motor vehicle collision, but was lucky enough to walk away relatively unscathed.

"I gotta say thank you for the airbags, because they did, they did save me," said Piccott outside the QEII Health Sciences Centre in Halifax.

But his custom Volkswagen Beetle, which he had spent two years creating, was not so lucky.

"That was number one to me, the car, it was always about the car, right?" says Piccott.

Last year, CTV Atlantic got to see just what made that car, and its owner, truly unique. 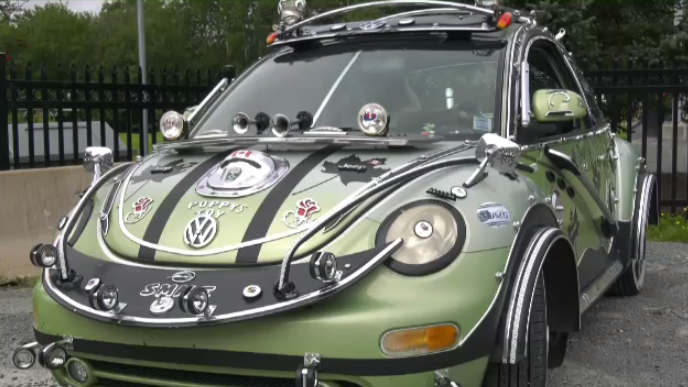 "Dad used to always say when people would come up to talk about it, 'you know what? This is to make you smile,'" says his daughter Melissa Johnson. "And that's what meant the most to Dad."

Now, Johnson has launched an online fundraising campaign and is hoping to raise the funds to help her father make another special vehicle.

"Just to start over because after the accident," she says. "He was more worried about the fact that he lost his car than himself!"

While she's relieved Piccott was OK, she is upset with the circumstances which she says led to the collision.

Johnson says her father had been at the Cobequid Community Health Centre emergency department with a high fever, and then was sent home because the department closes at midnight.

"And then he gets up in the morning and seemed OK, and the drive from our house to Cobequid is three minutes, and within those three minutes, he passed out, due to the spike in the fever, and crashed," she says.

"I should never, never have been sent home in that hospital when they didn't know what my problem was, I was in there with a serious problem, and they just sent me home," adds Piccott, saying he had been at the hospital previously with fainting issues which should have been in his medical records.

When asked about its policy for sending patients home from an emergency department, a spokesperson for Nova Scotia Health replied in a statement.

"Because Cobequid emergency department closes each evening, there is an overcapacity plan, which involves identifying when the number of patients waiting to be seen exceeds the resources available to provide care prior to closing," writes John W. Gillis, media relations director.

"The doctors and nurses use the triage guidelines to ensure that those who are the most acute are seen and provided care; those that require an immediate assessment are seen by the physician and then provided with direction regarding next steps, either returning the next day or presenting to another emergency department."

The statement continues, "Those who do not require an immediate assessment can return the next day. Patients are provided with this information throughout the evening at the site and always have the opportunity to leave Cobequid and present to another emergency department."

Piccott says he’s just glad no one else was hurt.

"Lucky enough, when I had the accident," he says, "it was only me - that could have been so different."

He’s now determined to get another VW Beetle.

"You will see me. I will be coming down that road again, with a smile on my face," he says.

After a night of delays, vote counts came hard and fast, resulting in Danielle Smith being named the UCP leader and Alberta's new premier.

An attacker with a large kitchen knife killed two people and wounded six others in stabbings along the Las Vegas Strip before being arrested Thursday, police said.

The number of recorded storm-related deaths has risen to at least 101 in the eight days since Hurricane Ian made landfall in southwest Florida.

Myles Sanderson was responsible for all 11 deaths during the mass stabbing in Saskatchewan last month, according to RCMP.

Poilievre condemned for use of YouTube tag targeting 'misogynistic' groups

Prime Minister Justin Trudeau and the Liberals are accusing Pierre Poilievre of 'using his videos to appeal to far-right misogynistic online movements,' following a report that Poilievre's YouTube channel was using a hidden tag to promote his videos among anti-women audiences.

Hunters who use a brand of climbing sticks intended to help them scale trees should stop immediately, Health Canada reports in a consumer product recall alert.

Judy Tenuta, a brash standup who cheekily styled herself as the "Goddess of Love" and toured with George Carlin as she built her career in the 1980s golden age of comedy, died Thursday. She was 72.