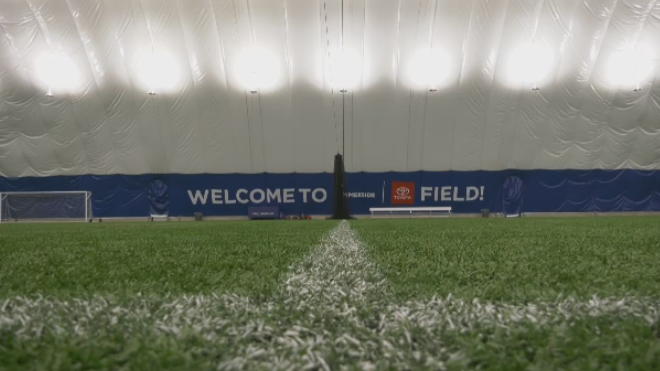 This dome in Summerside is one of the biggest facilities being built for the Canada Games. It’ll host some of its indoor sports.

While the games only last a short time, the sports venues are being built to remain long after.

A dome in Summerside is one of the biggest facilities being built for the games. It’ll host some of its indoor sports.

The space contains a pair of regulation soccer fields and a football field. It’s already seeing use from golfers practicing in the off season.

"It’s pretty exciting to be involved in leaving this type of infrastructure for generations to come," said Wayne Carew, 2023 Canada Games board chair.

The Canada Games athlete village will be on the University of Prince Edward Island’s Charlottetown campus, where workers are still adding the finishing touches.

After the games, the building will serve as UPEI’s new residence.

"The housing component at UPEI, that’s 260 beds that will provide housing for those individual students that come here,” said Premier Dennis King. “Which will take some of the pressure off of some of the connecting communities.”

The City of Charlottetown is also partnering with the games, they’re splitting the cost of a new permanent outdoor skating rink.

There won’t be any Canada Games competitions on that ice, but it will be part of the games festival.

"This will be a destination. This is open, it’s free, anybody can come skate,” said Terry Bernard, Parks, Recreation, and Leisure Committee Chair. "But there’ll be other things going on here, and be other opportunities that the city can put on that’s going on here.”

The ice will be refrigerated, so it’ll open sooner and stay open longer than previous natural ice surfaces that’ve been put in, keeping the ice cold in up to 10 degree weather.

In addition to these big physical projects, there’s also all the volunteers, 4,300 so far, right on target for three months ahead of the games.

But Carew recommends islanders sign up sooner rather than later.

The major infrastructure projects will stay after they’re finished being used.

The games society added that it’ll be a legacy for the community for years to come.

WHO declares COVID-19 global emergency isn't over. What happens next?

The World Health Organization decided Monday not to end to the COVID-19 global public health emergency it declared three years ago, even though the pandemic has reached what the international body calls an 'inflection point.'