P.E.I. reports no new cases of COVID-19, total of six cases in April

The total number of cases on the island remains at 27, with 24 now considered recovered.

"We've had one case in the last two weeks and a total of six cases in the month of April," said P.E.I.'s Chief Public Health Officer Dr. Heather Morrison during a news conference on Thursday.

On Tuesday, the province reported its first new case of COVID-19 in 13 days.

“Our approach to testing will continue to evolve as the situation evolves,” said Morrison. “Testing at the bridge began Tuesday for long-haul truckers who reside on Prince Edward Island. It would be challenging for many of these long-haul truckers to get to swabbing clinics in Charlottetown or Summerside, and sometimes they are not in P.E.I. for too long.”

Morrison also answered questions about the need to bring temporary foreign workers onto the island.

“Temporary foreign workers are considered essential workers to make sure our food supply chain is not interrupted and this is essential for Prince Edward Island,” said Morrison. “We’ve developed a proactive approach to make sure temporary foreign workers are able to self-isolate, and they are taken directly to a facility. They are housed in individual rooms, and there is close monitoring by a nurse during their stay in self-isolation, and they would all have a negative test prior to going to their employers."

The new case is related to international travel and is a man in his 50s from Kings County, who is self-isolating at home and doing well.

Morrison revealed on Wednesday that the man had flown into the Halifax airport and then drove across the Confederation Bridge, where he was flagged and told to self-isolate.

"This is an important reminder that the virus has not gone away, and that as we talk about easing up measures, we are not without risk," said Morrison.

All confirmed cases of COVID-19 on the island have been connected to travel.

The newest case is the first case to be identified in Kings County. Eighteen of the cases are located in Queens County, with the other eight in Prince County.

The individuals with positive cases on the island range in age from 20 to 79. Of the 27 confirmed cases, 11 are women, and 16 are men.

Previous to Tuesday's new case, the last positive case reported by Prince Edward Island was on April 15. That case involved a man in his 30s in Queens County, who had travelled internationally. Prior to that, the last new cases were reported on April 8.

Beginning Friday, P.E.I. will be easing back some restrictions as phase one of their four-phase ‘Re-open P.E.I. Together’ plan begins.

Morrison says that officials will be checking in with businesses and residents to answer questions, but reminds islanders that most of the first phase is limited to recreational activities and visits of no more than five individuals.

“A lot of what was in the first phase are recreational activities that I don’t expect enforcement would be a significant part of that,” said Morrison.

Morrison says she had conversations with some islanders in the wedding industry, and doesn’t believe any mass gatherings will take place this summer, although she wouldn’t rule out that they won’t be permitted at all in 2020.

“We don’t anticipate any large, mass gathering to take place, we have not gone as far as some other places and said that absolutely won’t happen this year, because I think it’s hard to predict six months down the road, but we’re trying to take this slowly,” said Morrison.

Details of phase one, starting May 1 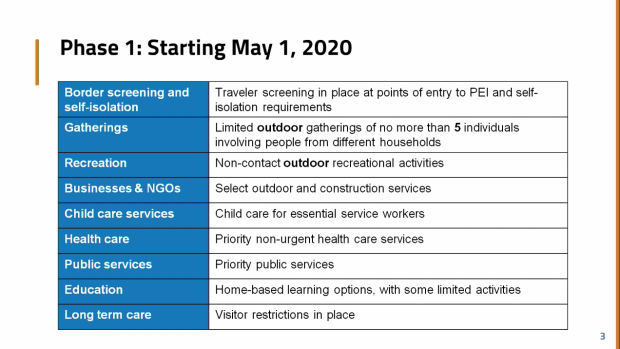 On Thursday afternoon P.E.I.’s Education Minister Brad Trivers gave an update on what the province’s education plan looks like for the rest of the 2019-20 school year.

During phase three, the province will be connecting students with teachers through appointments.

Beginning June 15, students from Kindergarten to Grade 12 will meet with their teachers by appointment to reconnect with them, review their process and provide them with feedback for future learning.

During the week of June 22, schools will offer year-end and graduation activities that allow students to connect with their friends, celebrate their achievements and bring closure to their school year, while keeping each other safe.

“Beginning May 11, designated schools will re-open for students who now receive individual support from student service teams, such as educational assistants and youth service workers,” said Trivers. “By bringing them back into the school, we can reconnect them with their EA or youth service worker and provide them with the structure and individualized support they need.”

Trivers says all students who are supported by EA’s or youth service workers are eligible for respite care.

What will it take for Canada's economy to recover from COVID-19's big blow?

Physical distancing until September could save nearly 100,000 lives in Ontario, Quebec, model shows

Is the virus on my shoes? All the places COVID-19 lurks, or doesn't

'All of our rooms are empty': Hospital ERs vacant during pandemic

Russian PM has coronavirus as cases surge past 100,000

Some parents are ditching their child's homeschool lessons, and experts say that's OK