The RCMP says it began receiving calls shortly after 1 p.m. on Saturday of large gatherings, drunkenness, disorderly conduct and people standing on vehicles.

As a result, police arrested and issued tickets, including some for COVID-19 violations, says Sgt. Andrew Joyce of the Nova Scotia RCMP.

Joyce couldn't confirm how many tickets were handed out but said there are still some criminal code investigations ongoing.

Area resident Angie Oriana Jenkins said there were hordes of students congregated on her street all day.

"The whole street was almost blocked off on either end … just crowds of people," she said, estimating there were roughly 300 in attendance at its peak.

She said she witnessed students removing traffic signs and barrelling them through the crowd.

"(There) was glass breaking at the other end of the street, it was just one thing after another," she said. 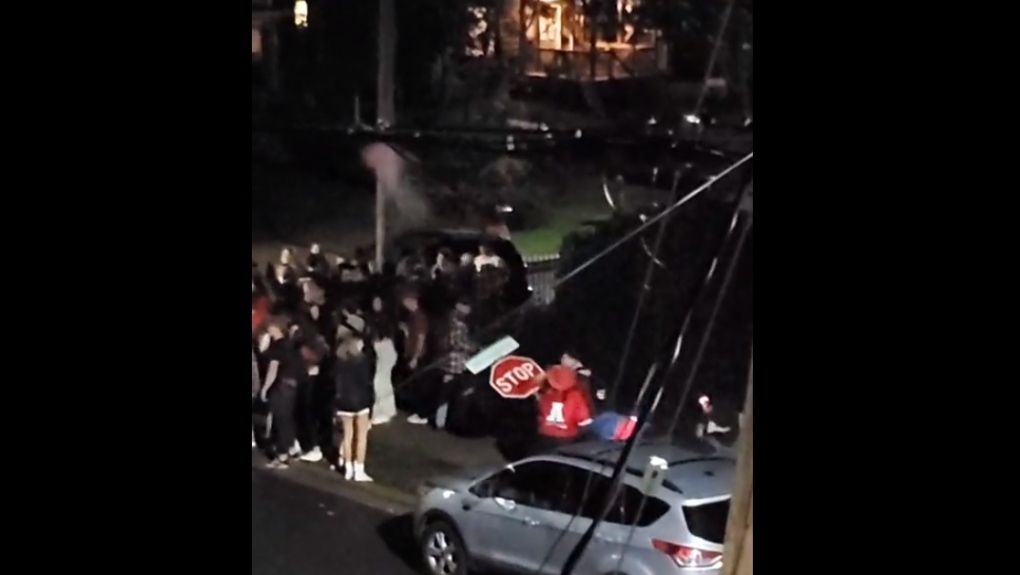 Living in a university town, Jenkins said she's used to parties, but Saturday's homecoming was different.

"It was frightening, actually, and I was feeling really anxious because I didn't know what was going to happen," she said. "You just feel the energy escalating."

She said she was worried about her vehicle getting damaged, the health and safety of the students, as well as COVID-19 protocols.

"Acadia University is one of the few in Nova Scotia that does not have a vaccine mandate," she said.

"So I knew there was a potential for a lot of those kids to not be protected."

In a statement, the university said it was "deeply disappointed" by Saturday's events.

"The University condemns unruly behaviour and extends apologies to neighbours in Wolfville who were troubled or inconvenienced by the disrespectful attitude of some students. These actions are inconsistent with Acadia’s values," it reads.

Acadia said it is working with the Town of Wolfville and the RCMP as it continues to investigate.

"Acadia students who broke laws, by-laws, or COVID health and safety protocols will be sanctioned and disciplined by the University," the statement said.

Late last month, Halifax Regional Police responded to a flood of noise complaints from streets near Dalhousie University, where thousands of people gathered -- first for a party in the afternoon and then for a larger event that night.

Frank Harvey, the university's provost, said the illegal gatherings posed a safety risk to the Dalhousie community. That's why university officials urged students who attended the parties to stay away from classes for a week and get tested for COVID-19.

A small group of students, residents and the president of Acadia University's student union gathered Sunday afternoon to clean up Wolfville.

"To show the community we care about it. This is not a new event we’ve done. We’ve had cleanups after homecoming in the past before," Matthew Stanbrook, the president of Acadia Students Union.

Steanbrook said the student union does not condone the parties and is encouraging people who did attend the parties to go get tested.

“The student union is really thankful for the majority of students who had safe gatherings and chose to have fun safely,” he said.