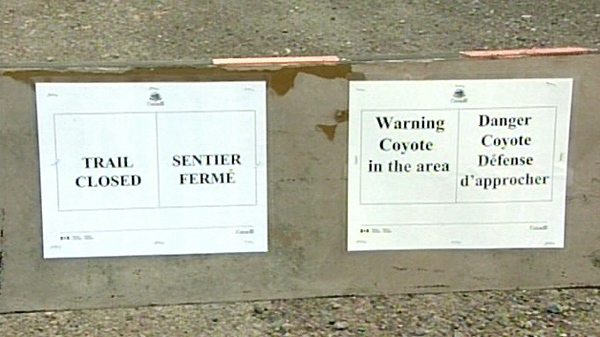 Trails were closed following a coyote attack at a Cape Breton park in October 2009.

HALIFAX -- Parks Canada plans to pay an American biologist $100,000 to come up with a plan to reduce encounters between people and coyotes in Cape Breton Highlands National Park.

The proposed contract announced Monday comes more than two years after a young Toronto woman was mauled to death by coyotes while hiking alone in the park. Taylor Mitchell's death on Oct. 28, 2009, marked the first recorded fatal coyote attack in Nova Scotia, and only the second in North America.

Ten months later, an unidentified 16-year-old Nova Scotia girl was bitten twice on the scalp as she slept outside at one of the park's campgrounds. The girl needed stitches to close her wounds.

The maulings were among several coyote attacks across Nova Scotia that prompted the province to offer a $20 bounty for coyote pelts. About 2,600 of the province's 8,000 coyotes were trapped last season for the bounty.

An official with Parks Canada said no one was immediately available for comment.

The federal government's two-year project in Cape Breton will include live-trapping coyotes in the park and tracking them with global positioning system collars.

Parks Canada says the contract will be awarded to Stan Gehrt at the Max McGraw Wildlife Foundation in Dundee, Ill., unless a better bid comes forward in the next two weeks.

"In the last 15 years there has been an increase in conflict between coyotes and humans, both in frequency and severity," the agency said in an advance contract notice posted Monday on the federal government's online tendering service.

"The primary objectives are to change the behaviour of coyotes so as to reduce conflict between coyotes and humans."

Gehrt's project is to be completed by April 2014. It will also include information about coyote survival rates, diet, range, den locations and whether availability of human food has played a role in promoting aggressive behaviour.

As well, Parks Canada wants an aversion strategy that looks at what tools or techniques will change coyote behaviour.

Gehrt, who teaches at Ohio State University in Columbus, is considered "the leading expert on urban coyotes in North America," Parks Canada said.

"There are no other researchers who have the combination of experience and expertise needed to achieve the objectives of this project."

It remains unclear why Nova Scotia's coyotes have become more bold, an observation challenged by experts who say routine coyote encounters are getting more attention from the media. Some have suggested mild winters, urban sprawl and a diminished supply of snowshoe hares are to blame.

In August 2010, a spokesman for Cape Breton Highlands said park staff would continue to trap and kill aggressive coyotes, but Derek Quann said the province's decision to promote a cull was a bad idea. He said studies have shown bounties don't work because coyotes have the ability to reproduce quickly even when their population is under stress.

Hunting and trapping are not allowed in most federal parks. However, culls have been carried out inside parks when resident animal populations have grown too large. About 400 moose were recently killed in Newfoundland's two national parks.