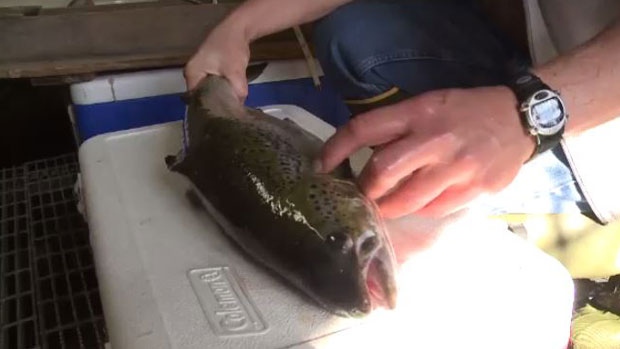 You would think a large appearance of Atlantic salmon in a river where the fish had virtually disappeared would be cause for celebration.

Not so in New Brunswick, where the wrong kind of salmon are showing-up and no one knows precisely where they’re coming from.

Jonathan Carr pulled a six kilogram Atlantic Salmon out of a fish ladder on the Magaguadavic River Tuesday.

Five others were caught today, almost 80 this month alone.

The problem is, they’re not supposed to be there.

They are escapes from salmon farms, and Carr fears it means thousands of farmed salmon are infiltrating rivers along the Bay of Fundy.

“There’s dozens of other rivers in the Gulf of Maine, outer Bay of Fundy, inner Bay of Fundy, where these fish have free access right now,” explains Atlantic Salmon Federation Biologist Jonathon Carr.

So far, no one has reported a large escape of farmed salmon.

The Fish Farmers Association says it has a good record in preventing farm escapes.

It says the evidence in this case does not suggest one huge escape from a salmon cage.

“In this case, it appears we have fish of a variety of different sizes of fish,” says Pamela Parker of the Atlantic Canada Fish Farmers Association. “Which seems to indicate that they would have come from a variety of farms.”

Scientists say the movement of large numbers of farmed salmon up a river like the Magaguadavic is nothing short of pollution, in this case, genetic pollution, and it threatens efforts to re-stock the river with wild fish.

It only takes one or two escapes entering the fresh water to spawn or interbreed with the wild fish to have disastrous consequences,” explains Carr.

Companies are supposed to report escapes involving more than 100 fish.

They can face hefty fines for allowing large numbers of fish to escape.

Biological samples are being taken from the escapes in an effort to trace the fish to a specific farm.