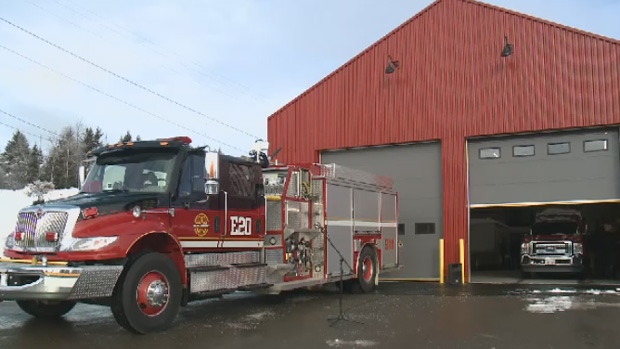 A new fire station has been built in Millville, N.B., after its previous one burned down in a suspicious fire.

A fire department in western New Brunswick that lost their station to arson more than two years ago is now rising above the ashes.

“Today is the most ecstatic feeling to see pushing our new truck into our new fire station,” said Millville resident Petrina McGuigan.

The old fire station was burned down in July of 2014. No arrests have been made in the case.

"It was a very long discouraging process for us where we learned over the days following that it was an act of arson,” said fire chief Justin McGuigan. “These volunteers work so hard for the community for so long.”

McGuigan says the new facility is state of the art with computer-controlled climate inside, in-floor heating and various different alarm settings.

“It's a very well designed, commercial built building," he said.

Since the fire, crews have been working out of the Department of Transportation and Infrastructure building nearby. While they say that worked for the time being, they're glad to be back in their own facility.

“I can't even tell you with words what it's been like simply because of the space requirements that were there,” said resident Sharon Connor. “It was very tight. The operations that normally take place in the DTI are different than ours, so there's a lot of dirt and grim around."

McGuigan says they wouldn’t be where they are today without support from the community. He says the department typically receives $1,000 a year in donations, but the total reached $40,000 over the past two years.

“I was brought to tears by this whole event because the whole village loves these firefighters,” said McGuigan. “They're volunteers, they give their own free time and they spend hours and hours training and they answer quickly when we need them, so it's just wonderful to see them in their new facility."

McGuigan says the disappointment felt in 2014 is long past.

“We spent 859 days in the DTI garage,” he said. “Today is day 860 and we're coming home today to a brand new station and the guys are just walking on air today."