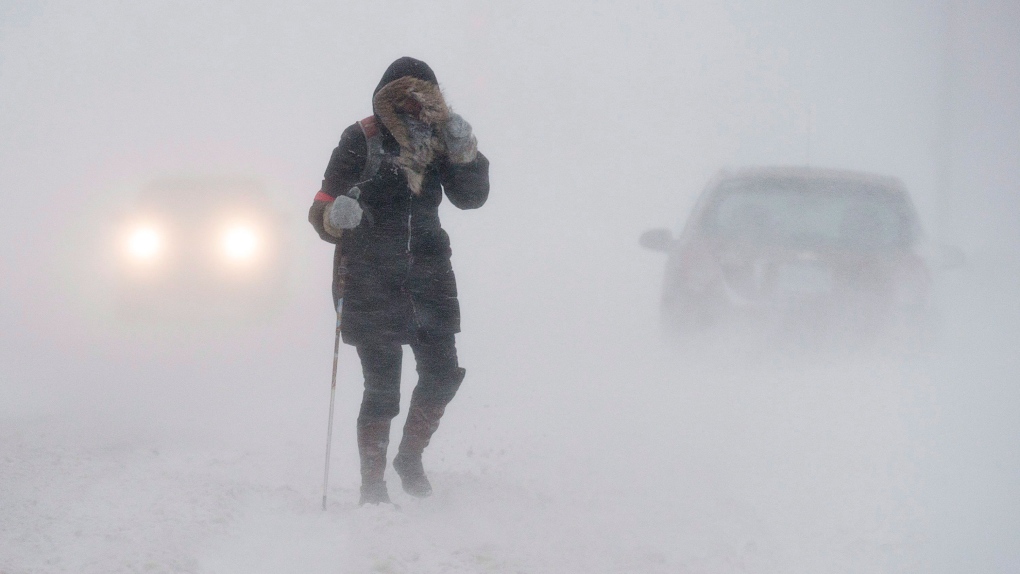 A pedestrian walks down Brunswick Street near Citadel Hill in Halifax as a major winter storm blasts the Maritimes on Monday, Feb. 13, 2017. (THE CANADIAN PRESS/Andrew Vaughan)

HALIFAX -- In this historic port city, the decision to call a snow day often starts in the middle of the night.

They monitor road and sidewalk conditions with the help of municipal and provincial transportation staff, and call the contractor for school busing in the region.

Then at 5:30 a.m., they call the top executive of the school authority.

"We review data and make a decision about how we should best proceed," says Elwin LeRoux, the regional executive director for Halifax schools.

It's a decision that impacts more than 50,000 students and their families, and LeRoux prepares for criticism whether he cancels school or not.

LeRoux says some parents express how difficult it is to scramble to find child care, while others complain about trying to get children to school in conditions they feel are unsafe.

"It's a heavy responsibility. It's not a decision that's taken lightly."

The Halifax school authority has other options at its disposal, including cancelling busing but keeping schools open, cancelling some schools but not all, delayed openings and early dismissals.

"We want schools to be open. We recognize that high quality instruction for students happens when children are in school," LeRoux says. "We also prioritize safety."

"We're not quick to close to interrupt the learning process," said Anne Wachter, the school's headmistress. "Normally when the public schools are closed we're open."

Over the last five years, the private school has had an average of 1.8 snow days a year -- once hitting three snow days during a particularly bad winter. The public school system had triple that number, with an average of 5.4 snow days over the same period, reaching a high of 9.5 cancellations in 2016-17.

Wachter said the private school operates in a different context than the public school system.

"We're close to the hospitals and universities in the downtown core with a bus stop in front of the school," she said. "We're on streets that get plowed first."

Still, Sacred Heart students come from across the municipality, and she said she trusts parents and caregivers will use their own personal judgment on whether it's safe to travel to the school.

"We don't stay open if it's not safe, but if people are going to work anyway, you can go to school," Wachter said. But she added that "if it's not safe for a city bus to go, that will really influence our decision."

The discrepancy in the number of snow days at Halifax schools is mirrored across the country, with school boards taking varying approaches to inclement weather.

Charles Pascal, a professor at the Ontario Institute for Studies in Education at the University of Toronto, said the decision to call a snow day is always "bit of an early morning guessing game."

But he said a distinction must be made between "clearly hazardous" winter storms and inconvenient weather.

"If the weather is really hazardous, a lot of workers should be staying home anyway because you shouldn't be out there driving," he said. "If it's not so hazardous, then keep everything open."

Pascal said he's less concerned with the loss of instructional classroom time, and more interested in how students are learning.

"I could care less about teaching time. It should be about learning time," he said, noting that learning modules could be created for use on snow days to "provide alternative ways of learning."

Liesl Gambold, associate professor of sociology and social anthropology at Dalhousie University, added that the focus should be on learning outcomes.

"I don't think that snow days are a problem in terms of missed days if the days that our children are in school are used to their fullest," she said.