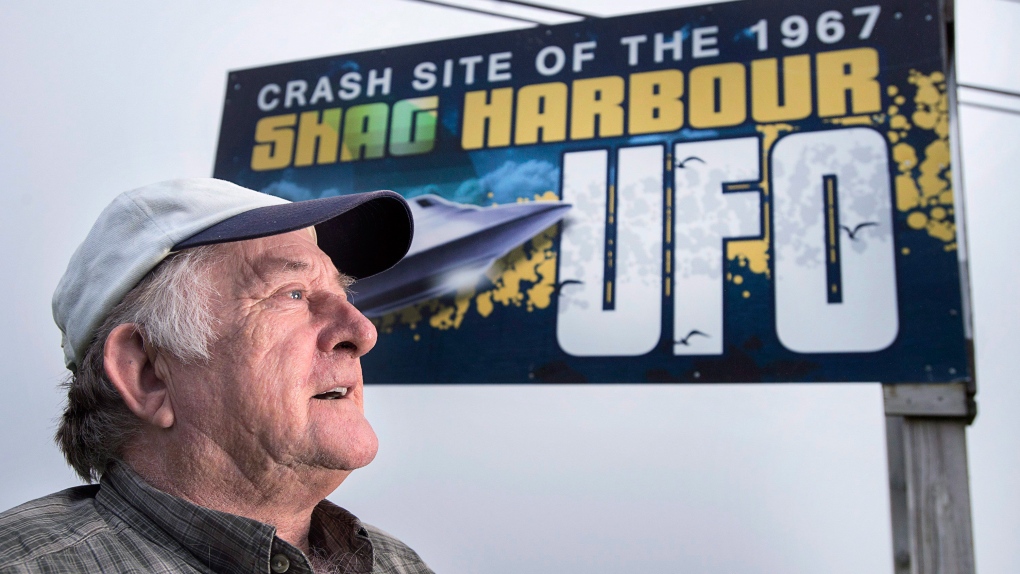 Laurie Wickens, president of the Shag Harbour Incident Society, is seen in Shag Harbour, N.S. on Saturday, Sept. 16, 2017. On the night of October 4, 1967, Wickens and four of his friends spotted a large object descending into the waters off the harbour. The object was never officially identified, and was therefore referred to as an unidentified flying object. The 50th anniversary of the event is being marked with a three-day festival. (THE CANADIAN PRESS/Andrew Vaughan)

HALIFAX -- The first frantic callers to reach the RCMP were clear: something had crashed in the waters off Shag Harbour, N.S.

Among those who saw the string of flashing lights on that clear, moonless night were three RCMP officers, scores of fishermen and airline pilots flying along the province's rugged southwest coast.

But a series of searches turned up nothing. No wreckage. No bodies. No clues as to what really happened that night 50 years ago.

A Halifax-area man later uncovered a trove of government and police records that would make the Shag Harbour incident Canada's best-documented and most intriguing UFO sighting.

Hundreds of UFO sightings are reported across Canada every year, but none has the paper trail of Shag Harbour.

In a series of RCMP reports and correspondence sent by telex between military officials in Ottawa and Halifax, there are specific references to unidentified flying objects, and no attempts were made to explain away what people were reporting.

Chris Styles, the UFO researcher who dug up those documents, remains baffled by the case.

"To this day, I don't know the absolute answer, but we're still finding things," says Styles, the author of two books about the Shag Harbour incident.

Next week, on the eve of the 50th anniversary, Styles will be the keynote speaker at the start of the three-day Shag Harbour UFO Festival. After 20-plus years of dogged research, he says he has new evidence to share.

It points to an explanation that hardly seems possible, unless you have a sense of what Styles has uncovered so far.

To be sure, the most compelling evidence comes from eyewitnesses like Laurie Wickens, now a 67-year-old former fisherman.

"There was four (lights) in a row, and they were going on and off," says Wickens, at the time a 17-year-old driving home to Shag Harbour with a friend and three young women. "One would come on, then two, three and four -- and they'd all be off for a second and come back on again."

Sure he was about to witness an airline disaster, Wickens found a phone booth and called the local RCMP detachment. Questions were asked about his sobriety. But he wasn't drunk, and he was sure about what he saw.

Several other people called the Mounties that night. They all told same story.

Soon afterwards, Wickens was among a dozen or so people gathered at the water's edge, watching in amazement as a glowing, orange sphere -- about the size of a city bus -- bobbed on the waves about 300 metres from shore.

Three of those at the wharf were Mounties. One of them called the Rescue Co-ordination Centre in Halifax. A coast guard cutter was immediately dispatched to conduct a search.

Before the ship arrived, volunteer searchers aboard two fishing boats soon spotted a long trail of bubbling, yellow foam on the calm waters -- but no wreckage.

A squad of Royal Canadian Navy divers later failed to turn up any clues after a three-day scan of the harbour floor, according to official military records.

To this day, Wickens has no idea what he saw.

"All I know is that we saw something, and something came down," he says, adding that he believes the divers pulled something from the water.

"I can't prove it, but in my opinion they found something."

Wickens, now president of the Shag Harbour UFO Society, will take part in a panel discussion Saturday that is expected to include Ralph Loewinger, one of the pilots aboard Pan Am Flight 160, a Boeing 707 cargo aircraft that was at 33,000 feet that same night.

They saw the same row of flashing lights over the Gulf of Maine as they approached to coast of Nova Scotia.

Loewinger and the other crew members never reported their sighting. Their story came to light about six years ago when Styles tracked them down.

"What sets this story apart is that the impact ... was witnessed by several independent and very credible witnesses," says Brock Zinck, a Nova Scotia seafood buyer and vice-president of the Shag Harbour UFO Society.

About 36 hours after the initial sightings, several Defence Department officials signed off on a memo that made it clear authorities had no idea what they were dealing with.

"A preliminary investigation has been carried out by the Rescue Co-ordination Centre in Halifax," the memo says. "It has been determined that this UFO sighting was not caused by a flare, float, aircraft or in fact any known object."

It's worth noting the search at Shag Harbour was conducted during a highly charged period in Canada's history.

The space race was on and so was the Cold War. Russian submarines were known to frequent the East Coast. And the Americans were testing all manner of devices to spy on their communist foes, including crude spy satellites that ejected film canisters at high altitudes.

While the official records provide no explanation for what happened, there are vague clues pointing to another incident about 50 kilometres north, just off the coast of Shelburne.

In his 2001 book, "Dark Object," Styles says he eventually interviewed former military insiders and members of the navy's Fleet Diving Unit, who told him the orange orb spotted in Shag Harbour had submerged under its own power and travelled to a spot on the seabed off Shelburne.

At the time, the area was the location for a top-secret U.S. military base, disguised as an oceanographic institute. The facility used underwater microphones and magnetic detection devices to track enemy submarines, but its true purpose wasn't revealed until the 1980s.

"I interviewed anybody who was still alive," Styles says. "I tracked them down. I was a bulldog with it back then."

In the book, Styles' sources talk about a secret flotilla of American and Canadian ships dispatched to the area. There was speculation about Russian submarines and, yes, extraterrestrial visitors. But there is no hard evidence to back their claims.

But the clues keep coming.

During a recent search of an island off Shag Harbour, Styles says he spotted a military marker that indicated it was placed there by staff from the fake institute in Shelburne, which means the U.S. military snoops had been there at some point.

"I'm not here to make believers," he says. "Some people say I'm a believer, but that's a bit of an exaggeration. I want the real answers."