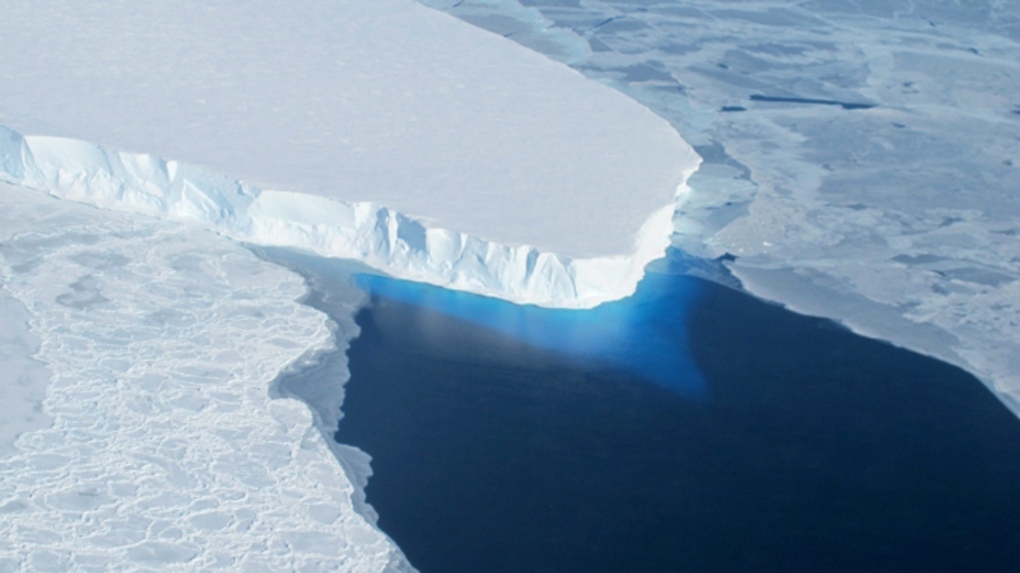 As icebergs drifted by his Antarctica-bound ship, David Holland spoke this week of how the melting glacier he's cruising towards may contain warning signals for the coasts of far-off Canada.

The atmospheric and ocean scientist from Newfoundland is part of an expedition to one of the world's most frigid and remote spots -- the Thwaites glacier in the western portion of the continent -- where he'll measure water temperatures in an undersea channel the size of Manhattan.

"The question of whether sea level will change can only be answered by looking at the planet where it matters, and that is at Thwaites," said Holland, director of the environmental fluid dynamics laboratory at New York University, during a satellite phone interview from aboard the South Korean icebreaker Araon.

It's over 16,000 kilometres from Holland's hometown in Brigus, N.L., on Conception Bay, to the site about 100 kilometres inland from the "grounding zone" where the Thwaites' glacier leaves the continent and extends over the Pacific.

The team's 20,000 tonnes of drilling gear will be assembled to measure the temperatures, salinity and turbulence of the Pacific waters that have crept underneath and are lapping away at the guts of the glacier.

"If it (the water) is above freezing, and in salt water this means above -2 centigrade, that's not sustainable. A glacier can't survive that," said Holland.

Since 2018, more than 60 scientists from the International Thwaites Glacier Collaboration group have been exploring the ocean and marine sediments, measuring warming currents flowing toward the deep ice, and examining the stretching, bending, and grinding of the glacier over the landscape below.

The Florida-sized Thwaites glacier faces the Amundsen Sea, and researchers have suggested in journal articles over the past decade it may eventually lose large amounts of ice because of deep, warm water driven into the area as the planet warms. Some media have dubbed Thwaites the "doomsday glacier" due to estimates that it could add about 65 centimetres to global sea level rise.

Holland notes current research models mainly suggest this would happen over several centuries, however there are also lower probability theories of "catastrophic collapse" occurring, where the massive ice shelf melts in the space of decades. "We want to pay attention to things that are plausible, and rapid collapse of that glacier is a possibility," he said.

While Holland looks at the undersea melting, other scientists are examining how the land-based portions of Antarctic glaciers are losing their grip on points of attachment to the seabed, potentially causing parts to detach. Still other researchers point to the risk of initial fractures causing the ice shelf to break, much like a damaged car windshield.

All of the mechanisms must be carefully observed to prove or disprove models on the rates of melting, said Holland.

"If the (water-filled) cave beneath the glacier we're studying gets bigger, then Antarctica is losing ice and retreating, and if the cave collapses on itself, then (the cave) will disappear. This is how Antarctica can retreat, these kinds of specific events," he said.

The implications of the glacier work reach back to Atlantic Canada -- which along with communities along the Beaufort Sea and in southwestern British Columbia is the region most vulnerable to sea level rise in the country, according to federal scientists.

Everything from how to calculate the future height of dikes at the low-lying Chignecto Isthmus -- the narrow band of land that connects Nova Scotia to the rest of the country -- to whether the Fraser River lowlands may face flooding is potentially affected by glacial melting in Antarctica, he said.

Scenarios where Antarctica ice melts more quickly than expected are briefly discussed in the 2019 federal report Canada's Changing Climate. Based largely on Intergovernmental Panel on Climate Change reports that refer to them as low-probability "tipping point" theories, the 2019 report invoked the possibility of one metre of sea level rise by 2100.

However, Blair Greenan, a federal oceanographer who oversaw the relevant chapter of the report, said in a recent interview that a rise in global sea levels approaching two metres by 2100 and five metres by 2150 "cannot be ruled out" due to uncertainty over ice sheet processes like Thwaites.

"We don't know, nobody knows," Holland said. "But it's plausible these things can change, and several feet of sea level change would have a major impact on Atlantic Canada. What's needed is glacier forecasting that resembles the kinds of accuracy that weather forecasting currently provides."

However, collecting glacier forecast data is a daunting undertaking in the short period -- from late January until mid-February -- when scientists can safely take readings. Helicopters will be ferrying a hot water drill, 30 barrels of fuel and water to Holland's site beginning near the end of January. The drill will have to penetrate over a kilometre of ice to reach the 300 metres of undersea channel to take measurements.

As the data is collected, some scientists question whether there's really much for Canadian coastal residents to worry about at this stage.

One study by Ian Joughin, a University of Washington glaciologist, has suggested Thwaites will only lose ice at a rate that creates sea level rise of one millimetre per year -- and not until next century. At that rate it would take 100 years for sea levels to rise 10 centimetres.

In a telephone interview last week, Joughin said planning coastal protection and other measures for the more extreme scenarios may not be cost effective at this point, as it may take up to a century before the major risks starts to unfold.

However, Joanna Eyquem, a Montreal-based geoscientist who is studying ways to prepare infrastructure for rising sea levels, said in a recent email that glacier research shows sea level forecasts "are constantly evolving," and adaptation efforts need to be quicker.

"The question is: How desperate does the situation need to be before we take action?" she asked.

This report by The Canadian Press was first published Jan. 23, 2022.

The actions -- or more notably, the inaction -- of a school district police chief and other law enforcement officers moved swiftly to the centre of the investigation into this week's shocking school shooting in Uvalde, Texas,

As Russia asserted progress in its goal of seizing the entirety of contested eastern Ukraine, President Vladimir Putin tried to shake European resolve Saturday to punish his country with sanctions and to keep supplying weapons that have supported Ukraine's defence.