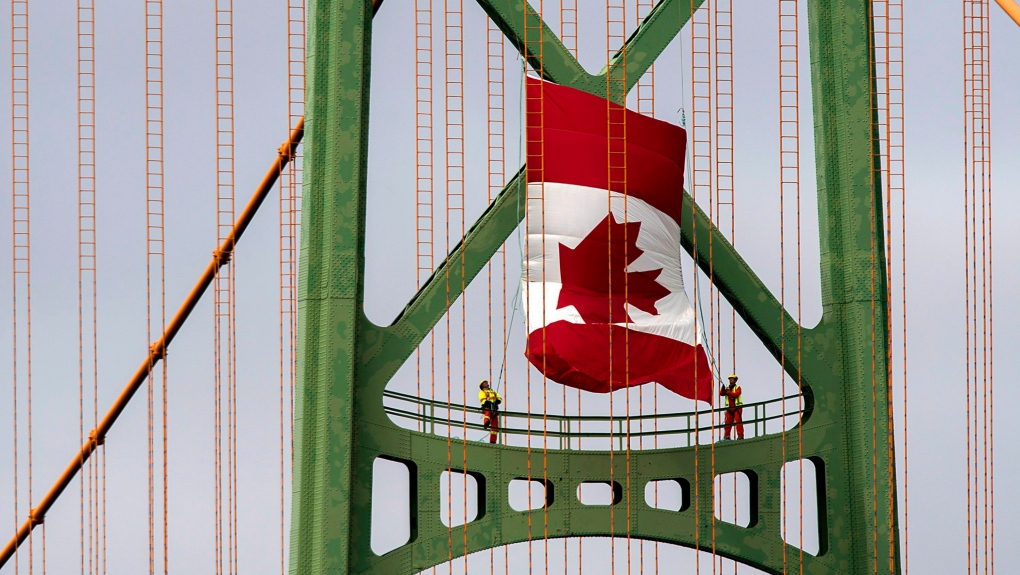 Workers install the Canadian flag on the Angus L. Macdonald Bridge in preparation for Canada Day on Tuesday, June 30, 2015. (THE CANADIAN PRESS/Andrew Vaughan)

The traditional start to the summer holidays is set to kick off with an Eastern Canada heat wave, as forecasters warned of sweltering temperatures that could inch into the 40s with the humidex this Canada Day weekend.

Environment Canada issued special weather statements Wednesday for the Maritimes and southern parts of Quebec and Ontario as a mass of hot and humid air heads north from the Gulf of Mexico.

"This will likely be the most significant heat event of the season thus far," said meteorologist Jill Maetea, who is based in Fredericton, N.B.

"With all the planned outdoor activities of the long weekend, people should be aware of the predicted weather conditions and take the necessary precautions. If you're going to outside -- it's going to be hot -- so seek shade when possible to avoid overexposure."

Southern Ontario was expected to feel the most heat, with the temperature forecast to climb into the mid-40s with the humidex. Humidex values could exceed 40 C in southern Quebec.

The national weather forecaster said it was not clear when there would be relief from the heat, and it would likely persist into next week.

The heat wave was a definitive sign of the arrival of summer in the Maritimes, just weeks after frost caused widespread damage to crops throughout the region.

Meanwhile, it was looking more like winter in Newfoundland earlier this week.

Snow fell over parts of the island Tuesday, setting a snowfall record for June 26 in Gander, N.L. There was no previous snowfall recorded on that day.