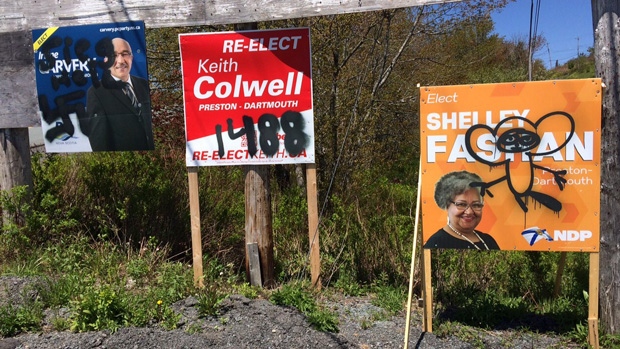 Election signs were defaced with racist graffiti in Dartmouth the day before voters headed to the polls.

Vandals appear to have spray-painted hate symbols and racist slurs on all three major-party signs in the Preston-Dartmouth riding as Nova Scotians headed to the polls on election day.

The Liberal sign had the number 1488 written across it in black paint, referencing an expression used by white supremacists, while the Progressive Conservative placard had a swastika and the Nazi salute Sieg Heil. The NDP sign was defaced with a drawing of a monkey.

All three parties have reportedly removed their signs.

Police are investigating the vandalism, which occurred in the community of North Preston.

"We are aware of it and are looking into it," RCMP Cpl. Jennifer Clarke said in an email Tuesday.

Two of the three candidates in the riding are African-Nova Scotian, while the area of North Preston is one of Canada's oldest and largest indigenous black communities.

NDP Leader Gary Burrill said on Twitter he was "disgusted to hear about signs being defaced."

He added: "Nova Scotia's diversity is our strength."

"We find it absolutely disgusting that somebody would go out of their way to put such a symbol of pure hate on these election signs," she said in an interview. "Volunteers work really hard getting these signs out and this is really upsetting."

The campaign manager for Liberal incumbent candidate Keith Colwell called the incident very unfortunate and said the sign was quickly taken down.

"It's a very proud community and for something like this to happen is very disturbing," he said. "I'm very disappointed to see this happen."

Hendsbee said often during elections there are petty acts of vandalism, such as signs being defaced or shot with paint guns.

"Usually it's just simple vandalism and destruction of property, which is futile and immature," he said.

But Hendsbee said the racist graffiti was cause for serious concern.