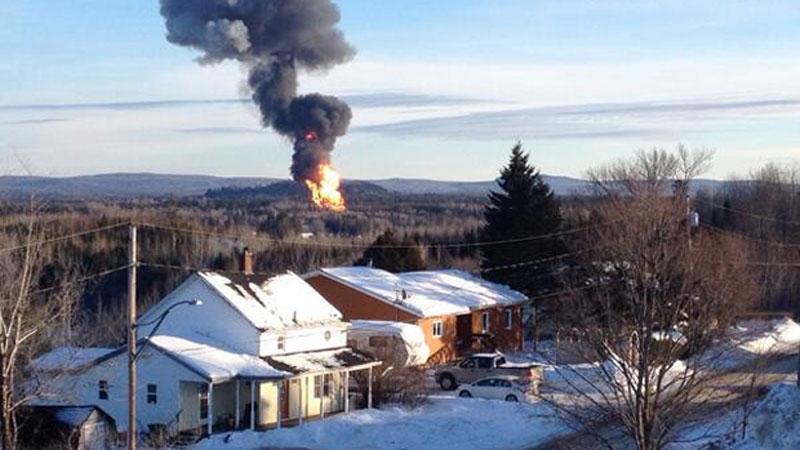 A large fireball shoots into the sky from the site of a train derailment near Plaster Rock, N.B. as officials use a controlled explosion to blast holes in three tanker cars on Jan. 10, 2014. (CTV Atlantic)

PLASTER ROCK, N.B. -- The first freight train returned to service Saturday on a rail line that was the scene of a fiery derailment in New Brunswick as all but one couple in an evacuation zone were allowed to return to their homes.

CN (TSX:CNR) spokesman Jim Feeny said the couple's house is within 100 metres of the derailment in Wapske and it hasn't been determined when they will be allowed to return.

"We are already there with those folks to examine the property and then an assessment will be done," Feeny said.

Aerial pictures of the derailment site near Plaster Rock showed that oil had flowed onto that property.

About 150 people had to leave their homes Tuesday night when the 122-car train derailed, with 19 cars and one locomotive jumping the tracks. Five derailed tanker cars were carrying crude oil from Western Canada to an Irving Oil refinery in Saint John, N.B., while four other tankers carried liquefied petroleum gas.

The evacuation zone stretched in a two-kilometre radius from the derailment. Those returning home Saturday expressed their relief.

"This is the day we were waiting for," said Laurie Beaulieu after a meeting with CN and Environment Department officials.

"Everybody is happy of course. There is no other way to explain it."

Derek Green praised the work of CN and environment officials to get the site cleared so quickly.

Fires that had raged at the site of the derailment in the community were extinguished early Saturday morning. Feeny said crews made good progress overnight Friday extinguishing the flames, removing material from derailed cars and repairing the broken track.

"It is essentially a matter of cleaning up now," Feeny said. "It has moved from an operations exercise to a remediation exercise."

He said CN will cover the costs of the cleanup and compensate those whose properties have been damaged and incurred expenses as a result of the evacuation.

"The next steps will be to remediate the site and the environmental concerns will be dealt with, and we are working hand in glove with New Brunswick Environment. That process will continue until it is complete, however long that takes."

On Friday, a huge fireball shot into the sky as crews blasted holes in three tanker cars carrying liquefied petroleum gas to allow vapour and gas to burn off. Fires involving a crude oil tanker and diesel fuel from a derailed locomotive had earlier burned out.

While people have returned home, the province's Health Department said as a precaution, people in the area with private wells should not drink their water until after they have been tested.

Richard Keeley, regional director with the Department of Environment and Local Government, said the water testing had begun.

CN has provided bottled water to homeowners who can't drink from their wells.

The cause of the derailment remains under investigation by the Transportation Safety Board of Canada. Feeny said investigators are still looking at the possibility that a wheel or axle problem on a freight car was to blame, but added that no conclusions have been reached.

Safety board spokesman John Cottreau said four of its investigators remained on the scene Saturday gathering information. It's not known when their investigation in Wapske will wrap up, he said.

"They're going to be there for as long as it takes to get the information they need," said Cottreau. "Noses are down and (they're) digging through the wreckage and looking to document as much as possible."

The first freight train passed through the derailment site two hours after residents returned to their homes.

CN's woes continued on the weekend after another train derailment in Burnaby, B.C.

RCMP Insp. Tim Shields said the train, which was a CP Rail train operated by a CN Rail crew, went off the tracks Saturday morning. Some of the cars were carrying coal, some of which spilled into a creek.

There were no reports of injuries or property damage.