HALIFAX -- The weather bomb that went off in the Maritimes late Thursday and kept detonating early Friday left plenty of ugly fragments in Wade Woodbury's backyard.

As he emerged from his home along the eastern edge of Halifax Harbour, cane in hand, Woodbury surveyed the damage, then marvelled at powerful waves crashing over a massive rock wall only 12 metres from his back door, howling winds hurling salt spray in his eyes.

"She was loud, very loud -- like thunder," said Woodbury, wearing a grey parka and a blue tuque as the temperature hovered around the freezing mark.

A storm surge late Thursday breached the wall, shoving a collection of lawn furniture, garbage cans, firewood and the entire fire pit into a tangled heap.

Woodbury, a resident of Eastern Passage for more than 20 years, said the winter storm kept him up most of the night as the electricity flickered on and off.

"I got up and wandered around -- not outdoors, mind you."

Work crews fanned out across the region Friday to deal with the mess left behind by hurricane-force winds, flooded coastal roads and downed power lines that left more than 280,000 utility customers in the dark -- most of them in Nova Scotia, the province that endured the strongest winds.

The brawniest gusts were recorded in Cape Breton, where a 170-kilometre-per-hour blast streaked through the rural area of Grand Etang, known for producing powerful winds.

In the Halifax area, which weathered its share of power outages, siding was ripped off some homes, limbs were torn from trees and the roof was ripped from at least one home in Dartmouth.

Dominic Fewer of Nova Scotia's Emergency Management Office said some roads were washed out and others littered with rocks and debris caused by storm surge and heavy rains.

Among the roads still closed Friday was the winding, narrow oceanside lane into a little enclave of five homes in Purcell's Cove, across from Point Pleasant Park in Halifax harbour.

"That's the only road. We're sitting here till we get dug out," said Andrew Murphy, an accountant who was unable to get downtown. "There's no way through that."

Usually, he and his neighbours just clean the mess up themselves, but this storm "flipped pieces of pavement the size of little cars," he said.

"I've lived here for 23 years, and at first the road would wash out once every three or four years. Now it does that three or four times a year. But this is probably the worst one we've had since hurricane Juan 14 years ago."

Videos posted to social media Thursday night showed waves from Halifax harbour crashing against the walls of a couple of waterfront restaurants. And as the harbour heaved, jets of spray shot up between the slats on the city's boardwalk.

Not far away, the storm surge moved the city's Canada 150 sign installation from its boardwalk perch in front of a waterfront hotel, as a small crowd watched and cheered.

Staff at nearby Salty's restaurant and The Gahan House brew pub said they were able to keep the water out with the use of sandbags -- an emergency measure adopted after hurricane Juan caused extensive damage in 2003.

In New Brunswick, crews cleared away mounds of snow that began piling up when the slow-moving, low-pressure system moved into the province Thursday afternoon. The heaviest snowfall was recorded at Pokemouche, which was buried under 58 centimetres, while Big River nearby got 50 centimetres of snow. Fredericton reported 25 centimetres by early Friday.

The president of NB Power said it will be late Saturday before all power is restored across the province. Gaetan Thomas says the number of customers affected by Thursday's storm peaked at 19,000 Friday morning.

"It took quite a while to get the snow removal into certain areas," he said. "The conditions along the coast ... you couldn't see anything last night."

In Bathurst, where they were digging out from under 50 centimetres of snow, plows were still trying to clear driveways and parking lots well into Friday.

"We got all that snow and freezing rain too," said Roger Arseneault, who was working at the front desk at the Atlantic Host hotel. "It's not safe to go on the roads. It's still blowing hard out there and the visibility ain't the best."

In Shelburne, along Nova Scotia's southwestern shore, the wind tore off a big section of a community centre's roof. As well, the town's sturdy armoury -- built from granite -- was damaged by storm surge, as was the town wharf.

One of the main roads along the waterfront, Dock Street, was submerged Thursday as the storm reached its peak. Though the water had receded by early Friday, a chunk of the sidewalk was missing and an assortment of flotsam was left behind.

"We're assessing the damage but it's fairly significant," said Shelburne Mayor Karen Mattatall. "There's lots of debris. I can see anchors and lobster traps ... It certainly seems to be some of the worst damage we've seen in a long time."

Pictures on Twitter showed scaffolding from the historic Lunenburg Academy laying in a heap on the ground as winds roared around it.

Along Nova Scotia's eastern shore, massive waves pounded the coast, including the Lawrencetown Beach area, famous as a surfing mecca.

"We could hear the wind howling," he said as he and some friends surveyed a section of the Lawrencetown Road that was blocked by rocks heaved ashore by the waves. "It's always impressive. Makes you feel humble."

As for the surf, he said no surfer would risk such chaotic seas.

The storm also closed schools for a second consecutive day in parts of New Brunswick, Nova Scotia and P.E.I., and was hampering air travel and ferry service in several areas.

The number of Nova Scotia Power customers still in the dark had dropped to 31,000 by Friday evening, with power for most homes and businesses expected to be restored later in the night or Saturday in more remote areas.

Jason Mew, acting executive director of Nova Scotia's Emergency Management Office, said the full extent and cost of the damage to provincial infrastructure would not be known until early next week.

-- With files from Alison Auld and Rob Roberts in Halifax and Kevin Bissett in Fredericton. 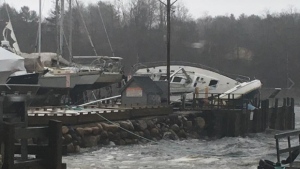 IN PHOTOS: Weather bomb takes aim at the Maritimes