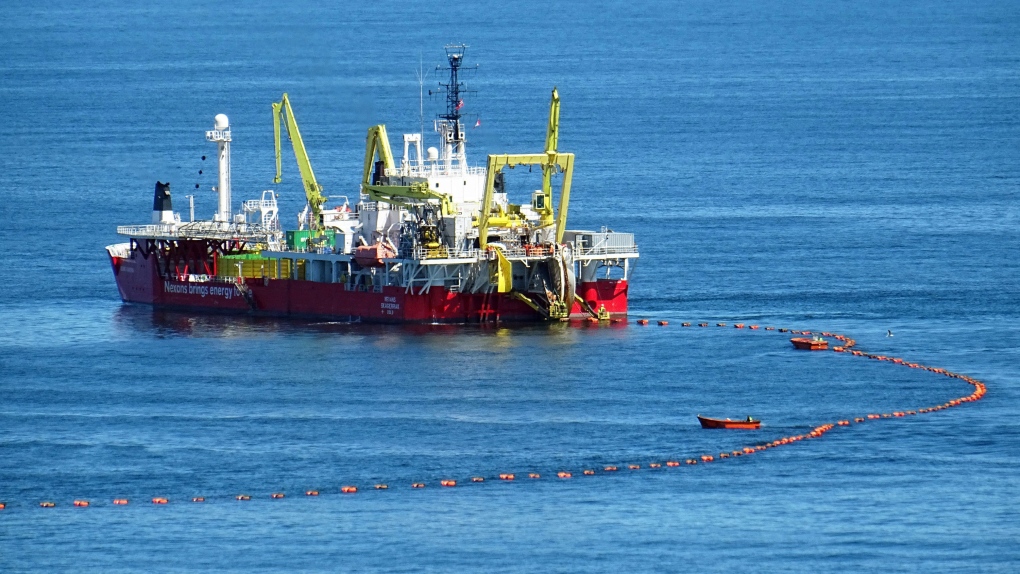 The Skagerrak takes part in the installation of the first Maritime Link subsea cable between Cape Ray, N.L., and Point Aconi, N.S., as shown in this undated handout image. The 170-kilometre cable is a key part of the $1.6-billion Maritime Link project, which will enable Nalcor Energy to provide Nova Scotia Power Inc. with renewable energy from the Muskrat Falls hydroelectric project in Labrador. (THE CANADIAN PRESS/HO)

The 170-kilometre cable is a key part of the $1.6-billion Maritime Link project, which will enable Newfoundland and Labrador's Crown-owned Nalcor Energy to provide privately owned Nova Scotia Power Inc. with energy from the Muskrat Falls hydroelectric project under construction in Labrador.

The cable is the first of two to be pulled across the Cabot Strait between Cap Ray in southwestern Newfoundland and Point Aconi in Cape Breton.

It was anchored at Point Aconi on Sunday by Nexans SA of France, the subsea contractor working for Emera Newfoundland and Labrador, a subsidiary of Emera.

Installation of the second cable is expected to begin next month, and Emera has said it plans to have electricity flowing between the two provinces before the end of the year.

The two cables, each the width of a two-litre pop bottle, can carry 250 megawatts of high voltage direct current.

Together, they weigh about 11,000 tonnes, which is more than the Eiffel Tower. Their copper conductors are protected by 13 layers of various types of armour, insulation, fabric tape and a lead-alloy sheath. They will rest on the ocean floor at depths up to 470 metres.

While the Maritime Link project remains on time and on budget, Muskrat Falls is two years behind schedule and $4 billion over budget at $11.7 billion. It was supposed to start producing power later this year, but the new deadline is 2020 at the earliest.

Still, the Maritime Link won't sit idle. Nova Scotia Power, another subsidiary of Emera, is expected to supply electricity to the island of Newfoundland to enable the province to shut down its oil-fired Holyrood generating station near St. John's.