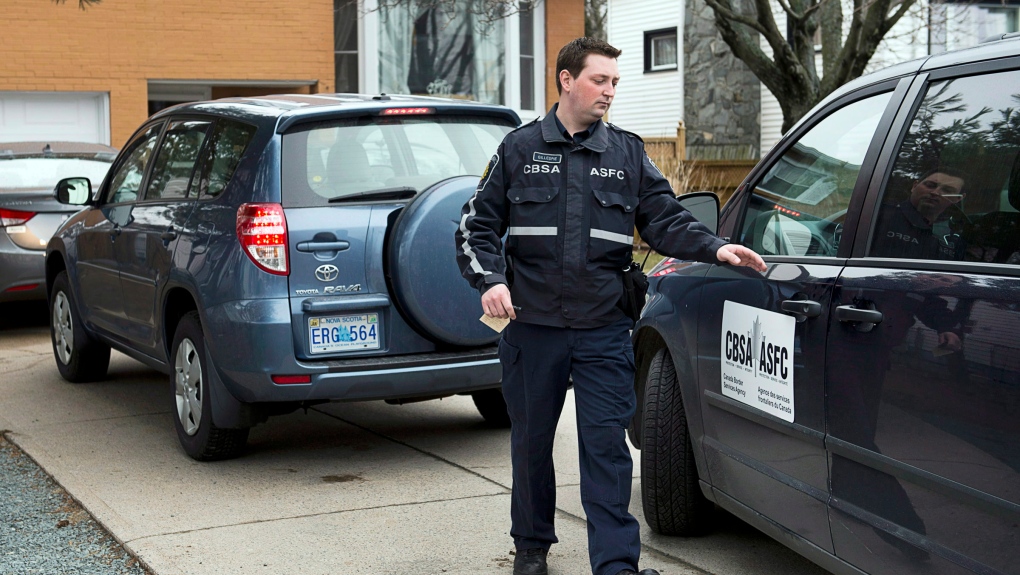 A Canada Border Services Agency officer leaves a residence during an investigation in Dartmouth, N.S. on April 10, 2013. Hector Mantolino, owner of Mantolino Property Services Ltd., has been charged with 56 counts under the Immigration and Refugee Protection Act for allegedly underpaying foreign workers and telling them to lie to the government about it. (THE CANADIAN PRESS / Andrew Vaughan)

HALIFAX -- Some of them were allegedly paid as little as $3.13 an hour for cleaning jobs that involved working as many as 300 hours a month.

Now, Filipino foreign workers who were allegedly taken advantage of by a Halifax businessman say the four-year wait for a trial has left them stressed and anxious.

His trial is scheduled for Dec. 5 and 6.

Mantolino, 55, briefly appeared in Nova Scotia Supreme Court Monday, and a teleconference with lawyers and Justice Glen McDougall was set for Oct. 12 to update the status of a disclosure application.

Liza Alcantara, one of 28 alleged victims, said they were hired to work at Mantolino's property maintenance and cleaning company under the federal temporary foreign worker program, and many are anxious for the court process to be over so they can continue building their lives in Canada.

The 47-year-old mother of two young men says she has not been able to "live peacefully" since coming to Canada five years ago, as she and the other victims have been preoccupied with the case since Mantolino was charged.

"It's been stressful for us," said Alcantara outside of court on Monday. "All of us wanted to have a peaceful life, not to be thinking about what will happen to our case."

About a dozen alleged victims -- some with small children -- sat across the aisle from Mantolino during Monday's proceeding.

Mantolino is accused of advising foreign workers to provide misleading and untruthful statements on their work permit applications. He's also accused of providing false statements to multiple federal departments regarding the workers' employment conditions, such as their rate of pay.

He allegedly counselled the workers to lie about their wages if they wanted to stay in Canada -- some were working for wages as low as $3.13 per hour.

An information to obtain a search warrant filed in Dartmouth provincial court said the alleged offences occurred between Jan. 1, 2010 and April 4, 2013.

The document said in January 2013, an employee who worked for Mantolino came forward to the Canada Border Services Agency with information.

The agency learned Mantolino -- who immigrated to Canada from the Philippines in 1994 -- was allegedly providing fraudulent employment contracts with inflated salaries and obtaining labour market assessment reports through fraud for the purpose of obtaining foreign workers, the document said.

"The workers are aware that they will not be making the stated wage. However, Mantolino takes additional funds off of the employees' actual salaries and provides them less hours of employment then promised," it said.

The document says Mantolino was also allegedly providing immigration services for a fee and completing applications that contained false statements about the employees' true salaries. The applications were built on those employees' work permits which were initially obtained through fraud, it said.

The information said Jason Sta Juana, 38, and his wife paid Mantolino $8,000 -- $1,500 each for "job offers" and $2,500 each for Matolino to submit immigration applications. New workers reported giving Mantolino similar amounts to come work in Canada, it said.

Sta Juana's pay stub showed that he was paid $13.10 per hour, but $3.90 was allegedly deducted off of each hour, something that was described in Mantolino's accounting books as a "cash advance." Sta Juana was therefore actually paid $9.20 per hour, but his CPP, EI and income tax deductions were based on a rate of $13.10, so he suffered a further loss of income, the document said.

"He has never been paid the amount that shows on his pay stub," it said.

The document said new workers from the Philippines were paid a rate of $500 a month, equating to about $3.13 per hour.

"We couldn't even afford to buy a cup of coffee at Tim Hortons," said Alcantara, adding that many workers were sending money to people back home in the Philippines while also trying to pay their rent and bills in Halifax.

Amelita Dela Cruz, another alleged victim, told an investigator that some workers were told they had to give Mantolino their income tax refund money "because Mantolino claims he was the one who paid the tax for them."

"(Dela Cruz) stated, 'We have no voice to complain. All my friends are afraid.' She feels that if she doesn't do things according to Mantolino, he will have her sent back to the Philippines," the document said.