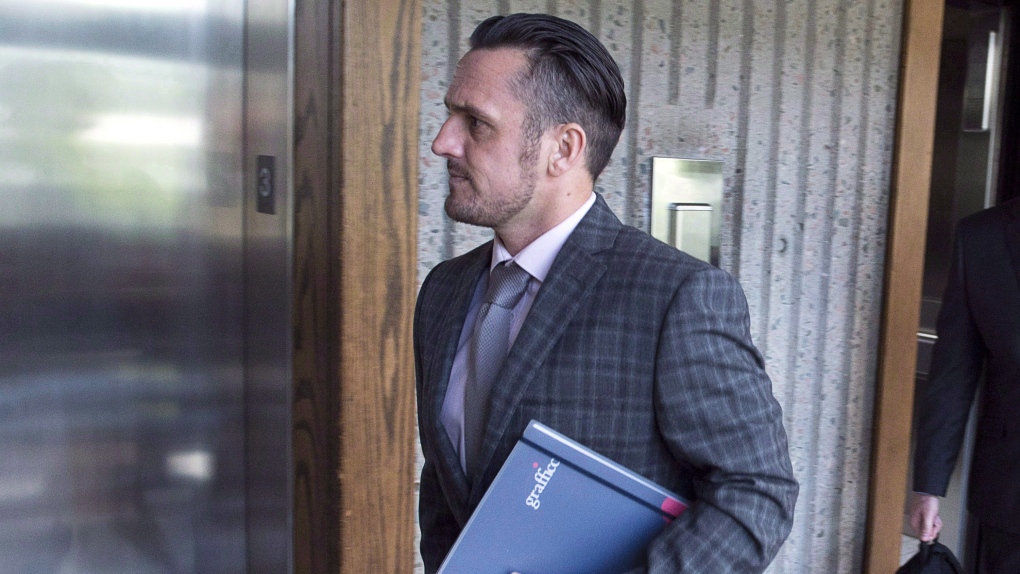 The trial of a British sailor will continue today in Halifax after the Crown stayed a sexual assault charge against the co-accused in the case. Simon Radford, a British sailor charged with sexual assault causing bodily harm, walks outside the court room in Nova Scotia Supreme Court in Halifax on Wednesday, Sept. 5, 2018. Fellow sailor Darren Smalley also facing charges in the incident. (THE CANADIAN PRESS/Andrew Vaughan)

HALIFAX -- A young woman has testified at the sexual assault trial of a British sailor that she found the complainant red in the face with no clothes on in a bed in the barracks of a Halifax-area military base.

The woman in her 20s from Halifax, who described herself as the complainant's best friend, said she was "visibly upset."

"She was saying, 'I need to get out of here. We need to leave'," she told Darren Smalley's trial on charges of sexual assault causing bodily harm and participating in a group sexual assault in barracks at 12 Wing Shearwater on April 10, 2015.

The woman said she had met a British sailor on the dating app Tinder and he invited her to a hockey game in Shearwater on April 9, 2015. She invited the complainant, whose identity is protected by a publication ban, to go with her.

Smalley was participating in a naval hockey tournament in the Halifax area at the time of the alleged sexual assault.

The woman said they watched the game and afterwards went back to the barracks at the military base.

She said they went to room 1704, where there were four beds and several men hanging out, one of whom was Smalley. They started to drink beer.

At one point, they both went to a drive-thru beer store with others to retrieve more beer. When they returned, the woman and the man she had met through the app went into a room and became intimate.

She made her way back to room 1704, and said the complainant seemed "annoyed" and "concerned" because she had not known where she was. They went to the bathroom and the friend apologized to the complainant.

Eventually, it was decided they would stay the night. The complainant, her friend and the sailor she had been intimate with went to find a place to sleep.

They found a room, and the complainant left her friend with the sailor, taking note of the room number.

But another couple came into that room, the woman testified, and so her and the sailor went to find another room. She did not tell the complainant she had changed rooms.

The woman said she felt drunk and tired.

She said she was becoming intimate again with the sailor when they heard a knock on the door. He stepped outside and talked to two people.

"I couldn't really hear what they were saying," she said.

After about a minute, he came back into the room and looked "kind of confused." The woman said the sailor asked her where the complainant was and she said she didn't know. She got dressed and they went back to room 1704.

She knocked on the door and sailor Simon Radford answered. She said the room was dark, but she could see the complainant lying on the bed and her eyes were closed.

"It didn't appear that anything was wrong," she said. "I was concerned, but at the same time, I was very tired. I was thinking, 'The room's quiet, the light's off. Everybody is probably just sleeping'."

She said she walked away from the room and ran into the sailor she had been intimate with earlier. She said based on that conversation, she went back to the room the complainant was in, opened the door and turned on the lights.

"(The complainant's) face was very red and it looked like she had been crying," the woman said when asked to describe what she saw, noting there was a blanket covering her up to her chin.

She went towards her, bent down and asked her what was wrong. The complainant told her she wanted to leave. She also noticed there was someone else in the bed lying next to the complainant.

The woman asked the sailor she had been intimate with to tell everyone to leave the room. As they were leaving, a different sailor passed her the complainant's pants and underwear.

The complainant appeared, "scared," was "shaking," and was not making proper sentences. The complainant sat up on the bed, and that's when her friend realized she wasn't wearing clothes.

They collected her clothes, got dressed and left the barracks. The two drove back to the complainant's home, and the next morning they both went to the doctor.

The woman was eventually interviewed by a military investigator.

The Crown did not finish questioning the woman. She'll be back on the stand Tuesday morning.

Earlier Monday, the Crown stayed charges against Radford, who has a serious infection.

The trial had been delayed multiple times because of Radford's condition. He returned to the United Kingdom for treatment following the last adjournment earlier this month.

His lawyer, David Bright, told Nova Scotia Supreme Court Justice Patrick Duncan that his client remains in a military hospital in England, and it's not know when he would be released.

"This is an extraordinary circumstance," said Duncan. "There are more obstacles than there are solutions."

After a brief recess, the Crown told Duncan it was staying the charge against Radford. Prosecutor Eric Taylor said it was in the public's interest to proceed with the charges against Smalley.

The Crown says the charges can be reinstituted within one year.

The complainant is expected to testify at the judge-alone trial, and the Crown has said it will call roughly 12 witnesses.

The trial has already heard from a military police sergeant, but the defence has yet to cross-examine him. He's expected to take the stand again at some point during the trial.