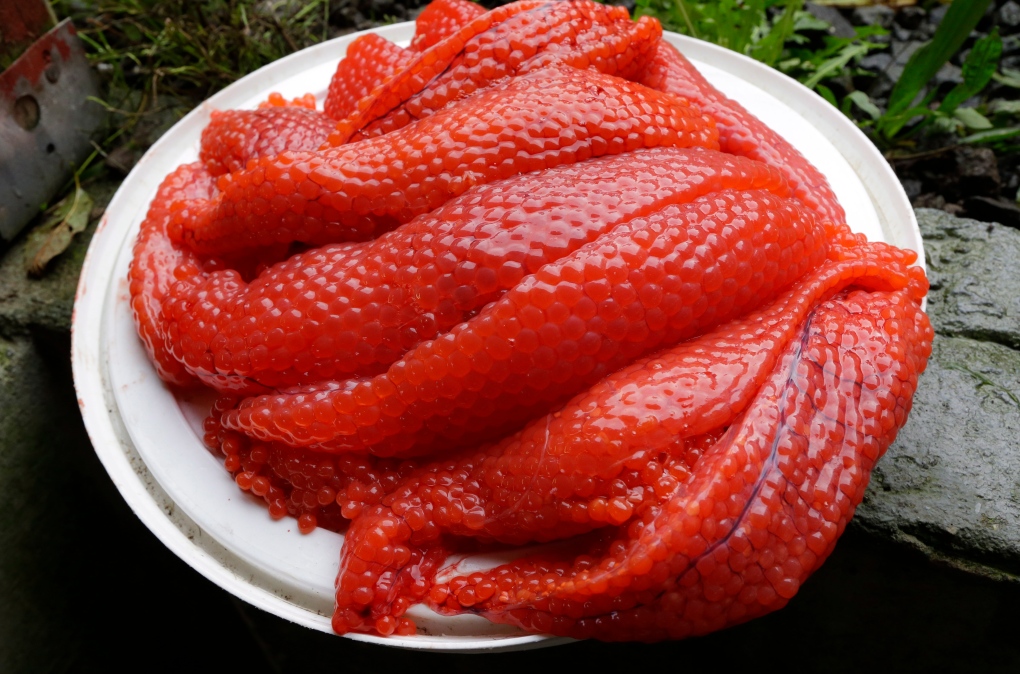 Eggs that have been removed from female chum salmon rest on a paper plate, Monday, Oct. 20, 2014, in Poulsbo, Wash., at the Grovers Creek Hatchery. (AP/Ted S. Warren)

HALIFAX -- Environmental groups say they are considering appealing a court ruling that quashed their bid to overturn federal approval of the production of genetically modified salmon eggs in P.E.I.

Mark Butler of the Ecology Action Centre in Halifax said Wednesday they are reviewing the Federal Court ruling and will decide next month whether to challenge it.

The group, along with Living Oceans Society, argued in court that the federal government did not follow its own legislated rules and conduct a full risk assessment before clearing AquaBounty to produce the eggs on the Island.

However, Judge Russel W. Zinn dismissed the claims and found the federal ministers' decisions "were reasonable" and followed the Canadian Environmental Protection Act.

Zinn did agree with the environmental groups that AquaBounty was restricted in using the salmon eggs only at the facility in Souris, P.E.I.

"We see that as a partial victory," Butler said in Halifax.

AquaBounty CEO Ron Stotish said in a statement that the court ruling supports the company's claim that the eggs do not pose any risk to the environment or human health.

The decision comes after the U.S. Food and Drug Administration approved the AquaBounty salmon for human consumption in November, making it the first genetically engineered animal product deemed safe for the dining table.

The U.S. government had stalled in approving the salmon for more than five years amid consumer concerns about GM foods. The company says it has developed a way to make Atlantic salmon grow twice as fast as normal by modifying eggs with genes from chinook salmon and an eel-like fish called the ocean pout.

Stotish said the court ruling will allow the Boston-based company to move ahead with plans to produce the eggs in P.E.I. and grow them out in Panama.

Health Canada has confirmed it is reviewing a submission by AquaBounty to sell the salmon in Canada.

Environmentalists have long opposed the plan, saying the modified fish could escape their containment and mix with wild salmon populations.