Heavy snowfall expected for parts of the Maritimes Sunday into Monday 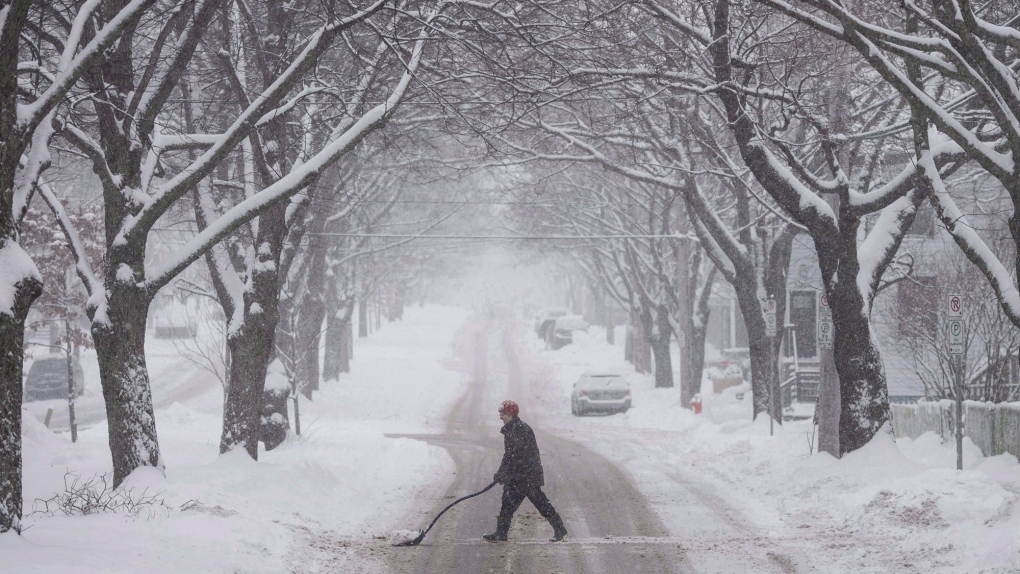 The system originates as an area of low pressure out of the Gulf of Mexico but increases in strength as it moves up just off the eastern seaboard of the United States this weekend. The speed of the system is such that it will move from Florida into the vicinity of the Maritimes in 24 hours or less.

As of Friday, the snow is timed to reach southwestern Nova Scotia late Sunday afternoon. The snow will then develop across the Maritime region Sunday evening and night becoming heavy for Nova Scotia. Bands of heavy snow could also reach parts of southern New Brunswick and eastern P.E.I.

By Monday morning the heavier snow will be clearing eastern Nova Scotia including Cape Breton. Areas of lighter snow and flurries may linger behind for the Maritimes into and through Monday afternoon. 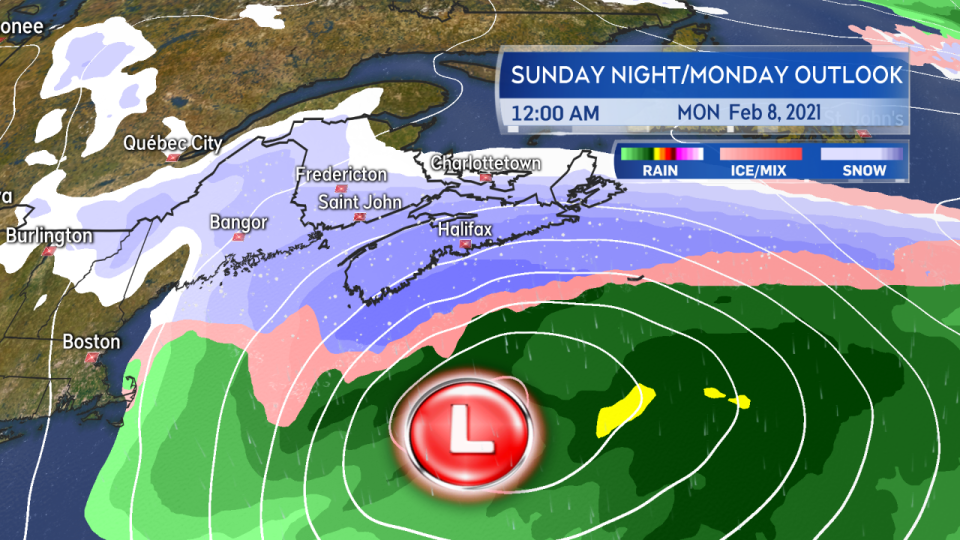 Snow reaches the southwest of Nova Scotia as early as late Sunday afternoon. Snow develops across the region Sunday evening and night becoming heavy for some areas.

The track of the storm is aligned to pass near or just outside Sable Island. That is favourable for keeping colder air in place and hence a mainly snow event with mixing in of ice pellets, freezing rain, and rain less likely.

Much of Nova Scotia could see 20 to 30 cm of snow, there has been some indication of pockets as high as 30 to 40 cm. Parts of southern New Brunswick and central/eastern P.E.I. could pick up 10 to 20 cm. Snowfall then tapers lower through central and northern New Brunswick.

A shift north or south in the storm track will shift the expected snowfall accordingly. I highly recommend that you check in frequently on the forecast through the upcoming weekend. 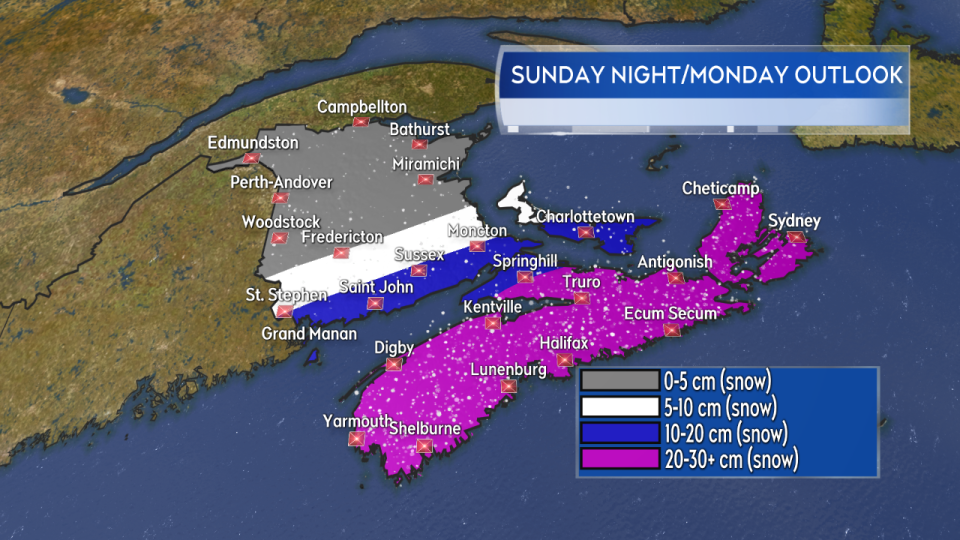 The most widespread snow reaching and exceeding 20 cm looks most likely for Nova Scotia. Heavier bands of snow could also reach parts of southern New Brunswick and central/eastern P.E.I.

Northeast winds shifting northwest will accompany the snow late Sunday into Monday morning. Widespread gusts of 50 to 80 km/h for Nova Scotia and 30 to 60 km/h for New Brunswick and P.E.I.

While not as strong as the storm that went through earlier this week, they are high enough to blow the falling snow around reducing visibility. Those conditions will be at their worst Sunday night into early Monday morning for Nova Scotia. Gusty winds on Monday may produce further areas of drifting snow, particularly where roads run along open terrain such as fields. 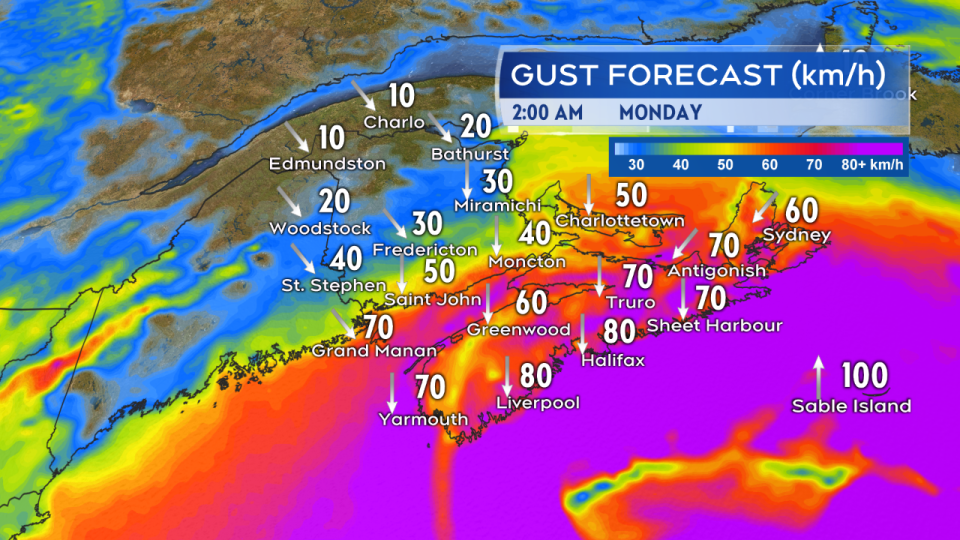 While not matching the previous storm, wind will be gusty enough to drive periods of blowing snow restricting visibility. Those conditions are expected to be most widespread for Nova Scotia Sunday night and early Monday morning.

Winds of 35 to 55 knots will develop for the Atlantic marine districts Sunday evening through Monday morning. Marine winds approaching 30 knots also look likely for the Bay of Fundy, Gulf of St. Lawrence, and Northumberland Strait.

Seas of 4 to 7 metres will also accompany the passage of the storm. The highest seas look most likely towards Georges Bank, Scotian Slopes, and Laurentian Fan. 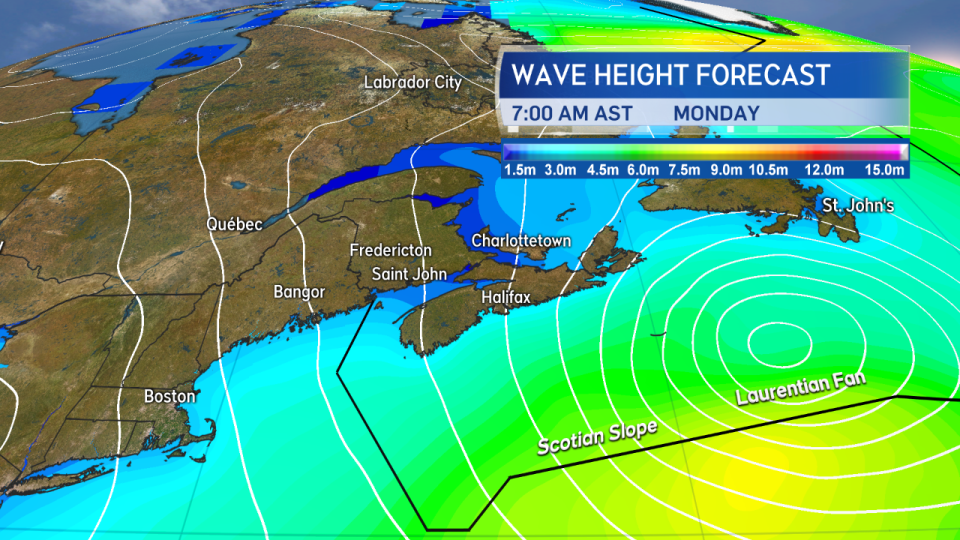 High winds and increased wave heights are expected with the passage of the storm, particularly for the Atlantic marine districts.