HALIFAX -- An update Monday's from the National Hurricane Center declared Teddy a Category 1 hurricane with maximum sustained winds near 150 km/h.

The storm was forecast to regain Category 2 strength Monday evening before transitioning to a post-tropical storm and weaken as it progresses towards and through Atlantic Canada Tuesday and Wednesday. 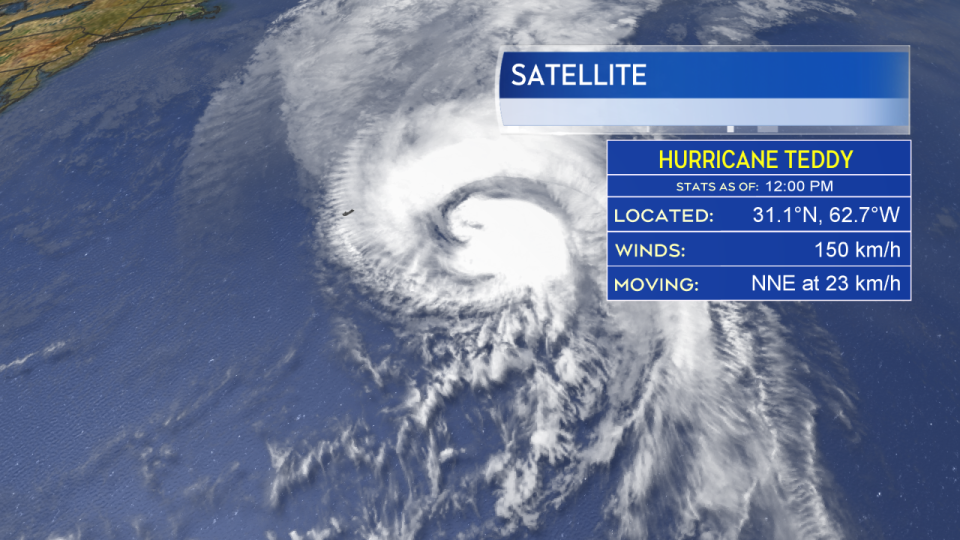 The centre of post-tropical storm Teddy is forecast to reach the eastern Atlantic coastline of Nova Scotia Wednesday morning or early afternoon. Due to the growing size of the storm, high wind, heavy rain, and large waves will reach the Maritimes on Tuesday. 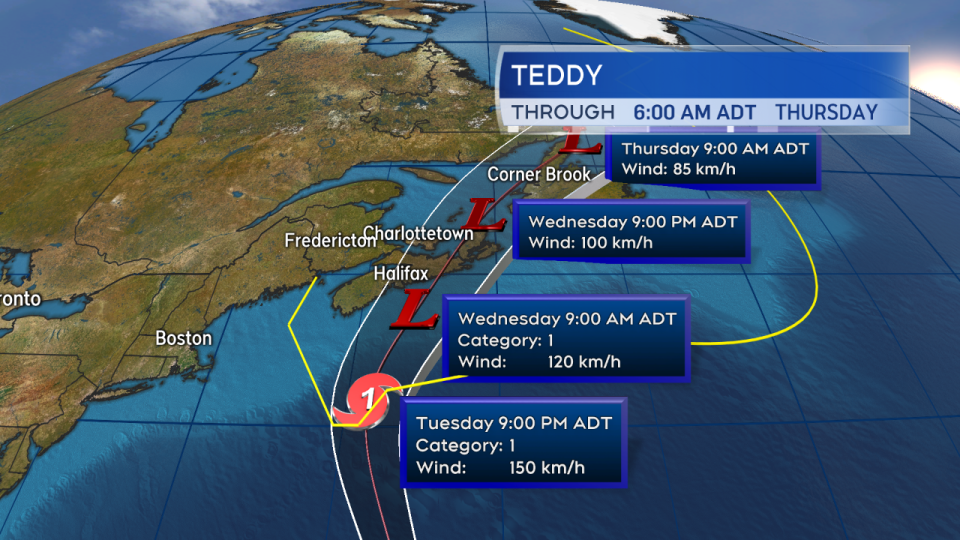 The centre of post-tropical storm Teddy nears the eastern Atlantic coastline of Nova Scotia Wednesday morning. Rain, wind, and waves are expected to arrive well ahead of that on Tuesday.

High clouds from the outflow of Teddy are already spilling in over eastern areas of Nova Scotia. Cloud cover will continue to increase Monday evening and Tuesday morning.

Rain will likely reach the Atlantic coastline of Nova Scotia near noon on Tuesday and quickly fill in across much of the Maritimes afternoon, evening, and night. An additional round of heavy rain is expected for Nova Scotia and P.E.I. Wednesday, but is expected to remain east of New Brunswick, with the possible exception of Moncton and the southeast. 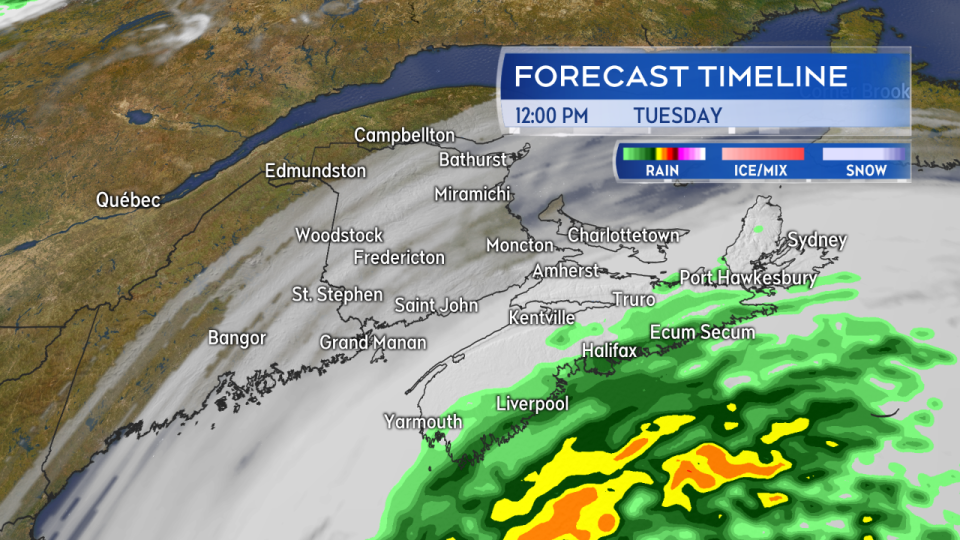 The first of the rain may reach the Atlantic coastline of Nova Scotia by near noon Tuesday. Rain and wind will continue to build in Tuesday evening, night, and Wednesday morning.

Due to the high amount of moisture contained in the storm there is the potential for local rainfall amounts of 50-100+ mm. The area at greatest risk of the higher rain totals appears to be Lunenburg County and east across Nova Scotia, including Cape Breton as well as Queens and Kings counties in P.E.I.

A shift west or east with the storm will shift that heavier rain accordingly. You should check that drainage on your property is free and clear of debris and, if you use a sump pump during heavy rain, that it is in working order. 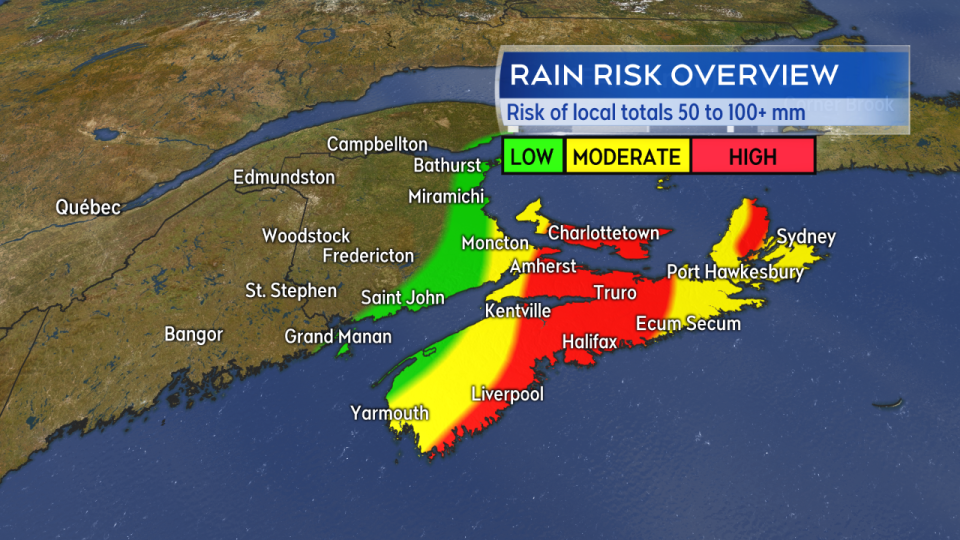 Due to embedded downpours there will be areas at risk of seeing local rainfall totals of 50 to 100 mm, increasing the potential for flash or localized flooding.

East and northeast winds will steadily increase through Tuesday into the evening and night. A brief lull is expected in the wind overnight. The wind will then increase from the north and northwest as the centre of the post-tropical storm approaches and passes Wednesday morning and afternoon. The wind will gradually ease Wednesday evening and night.

The strongest winds are forecast to occur on the Atlantic coastline of Nova Scotia and in Cape Breton's Inverness County, due to the topography of the Highlands. For these locations peak gusts could reach 80 to 110 km/h. Inland gusts for Nova Scotia, P.E.I., and southeastern New Brunswick are likely to reach 50 to 80 km/h. Near-coastal gusts in the vicinity of the centre of the storm Wednesday morning and afternoon could reach as high as 110-130 km/h. That looks most likely for the coastline of Guysborough County through Cape Breton's Scatarie Island.

Trees are still in full foliage. That will increase the force of wind on them and could contribute to branch or tree falls resulting in power outages. 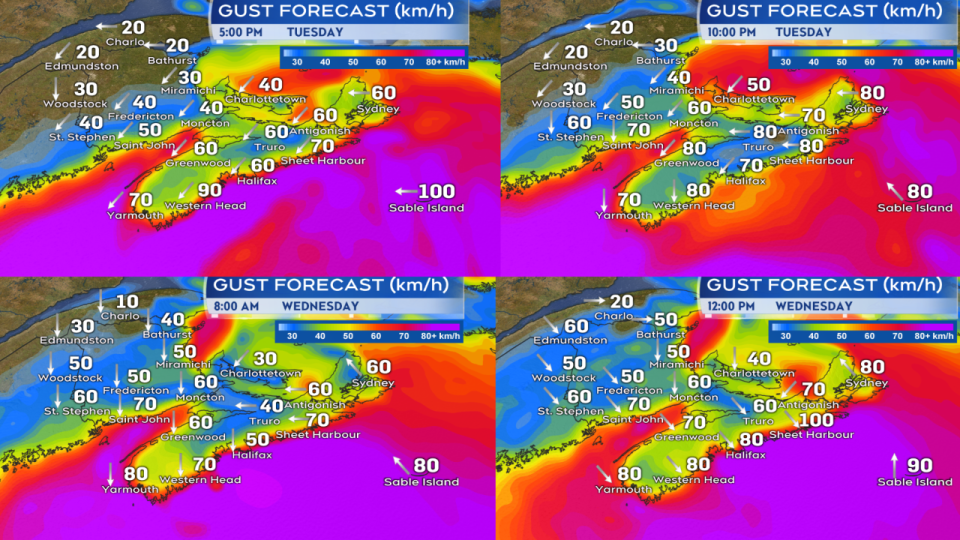 Two periods of peak winds are expected with the storm -- one Tuesday evening and night with a brief lull overnight and a second developing Wednesday morning and afternoon.

Wave heights for coastal areas of Nova Scotia and P.E.I. will continue to build on Tuesday. Waves on coastal P.E.I. could reach 3 to 5 metres and 3 to 9 metres for coastal Nova Scotia. There is a risk of storm surge during high tides on Tuesday and Wednesday. Tide tables can be found at www.waterlevels.gc.ca.

A number of weather warnings, watches, and statements have already been issued by Environment Canada. These include tropical storm watches and warnings issued for areas of Nova Scotia and P.E.I. Wind and storm surge warnings are also in effect for Nova Scotia.