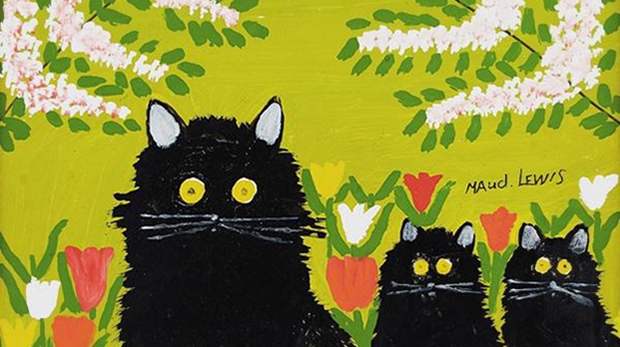 TORONTO -- A Maud Lewis painting has been sold for well above its pre-auction estimate for the second time in a month.

Two of her other paintings also were up for auction but sold for lower prices than expected: "Children Walking in the Snow" sold for $8,050 and "Winter Sleighing Scene" sold for $7,475.

Earlier this month, a painting recently discovered at an Ontario thrift store by Lewis, entitled "Portrait of Eddie Barnes and Ed Murphy, Lobster Fishermen," sold for $45,000 in an online auction -- almost three times its estimated price.

Lewis, who lived in poverty for most of her life, sold paintings from her home near Digby, N.S., for as little as $2 and $3. She died in 1970, but her paintings have since sold for more than $20,000. Two of her works were ordered by the White House during Richard Nixon's presidency after Lewis achieved widespread attention.

The Canadian artist has been the subject of a recent biopic starring Oscar-nominated actors Ethan Hawke and Sally Hawkins.

Hawkins is getting critical acclaim for her portrayal of Lewis, who persevered through juvenile rheumatoid arthritis, poverty and ill treatment from her loved ones.

The movie, which is set in Nova Scotia and was filmed in Newfoundland, has also received critical acclaim at various festivals around the world and captured the Super Channel People's Choice award at the Vancouver International Film Festival. It became a blockbuster on the East Coast, with people lining up around the block at some theatres when it was released in April.

Rob Cowley, president of Consignor, said in a news release that the recent biopic most certainly was a factor in boosting the price for her paintings.

"Maud Lewis always had a cult following for her distinctive art, but when celebrity pop culture aligns to contribute to an artist's narrative, it provides an instant appreciation for their works of art," said Cowley.