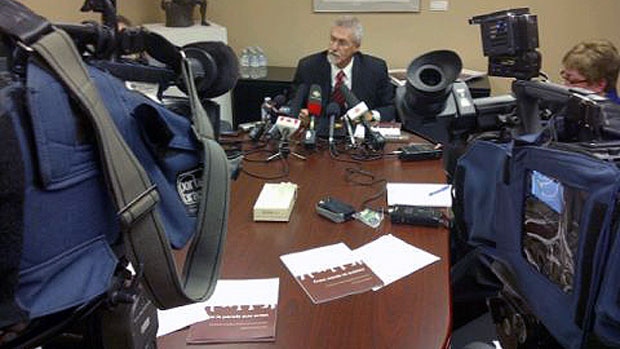 FREDERICTON -- New Brunswick's commissioner of official languages says changes are needed to the law to provide greater equality of English and French in the province.

In his 2011-12 annual report, Michel Carrier says revisions to the Official Languages Act must do more than maintain the status quo.

Carrier said senior managers in the public service should be bilingual so that employees can be supervised in the language of their choice.

And while progress is being made by the government, he said, there are very few concrete measures in government plans that would create a truly bilingual culture within the public service.

He is also calling for the creation of a legislature committee on official languages, and he wants greater powers to appear before committees and deal with language issues in a more timely manner.

A committee of the legislature is reviewing the Official Languages Act behind closed doors.

Carrier said he has no position on the committee's decision to conduct the hearings in private.

"They've consulted far and wide and I am somewhat comforted by the fact that an act is not passed in secret," he said. "Revisions to an act will be passed in the legislative assembly, in public."

The Official Languages Act, which was passed in 2002, must be reviewed every 10 years.

Carrier's office received 203 complaints during the year, most having to do with a lack of public services in French.

Some of the complaints dealt with an inability to be served in French in hospitals.

Carrier said while progress is being made to provide greater bilingual services at hospitals it is still "hit and miss."

When he was rushed to the cardiac care unit in Saint John in February, Carrier said he had no problem getting service in the language of his choice. "I was served from the time I got to cardiac unit to the time I left in my language of choice, which is French."

He said communicating with health professionals in the language of your choice is more than an issue of language, it's about safety.

In his 51-page report, Carrier says he's still waiting for government to act on a recommendation he made last year for an official policy to ensure New Brunswick's immigration practices promote both linguistic communities equally.