N.B. highway project to be completed a year ahead of schedule 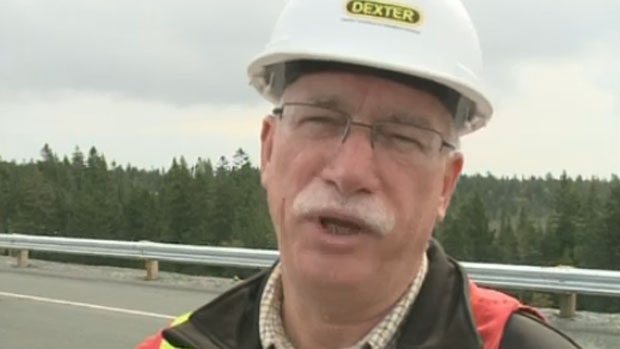 Environmental Manager Dave Keys says the highway had to be re-routed when the construction company came across an ancient First Nations archaeological site.

The biggest highway construction project underway in the Maritimes is now drawing to a close, and is even expected to be completed nearly one year ahead of schedule.

The New Brunswick government says the $540 million highway, known as the Route 1 Gateway, will officially open by Oct. 25.

“It’s nice to get these projects done because it saves lives,” says Pat Chouinard of Dexter Construction.

The completion of the four-lane highway between Saint John and the U.S. border was supposed to happen a year from now, but Dexter Construction says it used more workers and compressed the project schedule.

“Innovation; we did a lot of value engineering with department staff,” says Chouinard. “We put the same hours into it, but by having more people at one time, that’s how we could complete the job faster.”

He says good weather this summer also helped move the project along.

Construction workers say they have to expect the unexpected, especially when working through territory that hasn’t seen a highway before.

In this case, they say the highway had to be re-routed when the construction company came across an ancient First Nations archaeological site.

“The archaeological site was very significant,” says environmental manager Dave Keys. “It was the oldest one found in the province. Because of that, we had to re-align about three kilometers of highway.”

The $540 million price tag has been criticized by some, but the province’s transportation minister says the 240 kilometre highway will provide long-term economic benefits.

“We have a full four-lane highway so that’s certainly going to improve and increase trade here in New Brunswick with the U.S.,” says New Brunswick Transportation Minister Claude Williams.

Transfield Dexter Gateway Services Ltd. will be responsible for the highway's operation and maintenance until 2040.

With files from CTV Atlantic's Mike Cameron and The Canadian Press