HALIFAX -- Nova Scotia has announced three more deaths related to COVID-19, bringing the total number of deaths in the province to 27.

The latest deaths all occurred at the Northwood long-term care home in Halifax on Monday. This follows seven deaths at the facility over the weekend.

“I want to tell those families how sorry I am for their loss,” said Premier Stephen McNeil during a news conference in Halifax Tuesday afternoon.

“It’s tough enough at any time but having to deal with this loss at a time of COVID adds extra distance and extra heartaches and on behalf of our province I want to acknowledge your pain and offer our condolences.”

As of Monday, 10 long-term care facilities in Nova Scotia had confirmed cases of COVID-19, involving 218 residents and 95 staff members.

Most of those cases are at Northwood’s Halifax facility. On Tuesday, Northwood reported a total of 270 confirmed cases, with 199 residents and 71 staff members affected by the virus.

Of the province’s 27 COVID-19 deaths, 21 have been at Northwood, and nearly all have been in nursing homes.

Gary MacLeod with Advocates for the Care of the Elderly -- or ACE -- says the situation at Northwood breaks his heart, but it doesn’t surprise him.

“I wake up in the morning, because I’ve been involved in this for so long, thinking, how many deaths are there going to be there today?” said MacLeod.

He believes the government could have done more to protect seniors during the pandemic.

“We’re having a war with this virus and the elderly are definitely casualties of this war,” said MacLeod.

“The ones that have passed away right now are definitely casualties of this COVID war and I just think that maybe some of those deaths could have been prevented if they had of reacted sooner.”

“Please be assured that if your loved one tests positive for COVID-19 the family will be contacted by a member of our staff to discuss the test result and the care plan,” said Northwood in a statement on its website.

Nova Scotia also reported 15 new cases of COVID-19 on Tuesday, bringing the total number of confirmed cases in the province to 915.

To date, there have been 26,902 negative test results.

Twelve people are in hospital. Three patients are in intensive care units.

The province says 522 people -- or 57 per cent -- have now recovered from the virus and their cases are considered resolved.

“But while we share that, we also don't want people to think that we're completely in the clear.”

There are cases across the province, but most cases have been confirmed in the central zone, which contains the Halifax Regional Municipality.

All of the province’s 15 new cases were confirmed in the central zone. The western, northern and eastern zones are reporting no additional cases at this time. 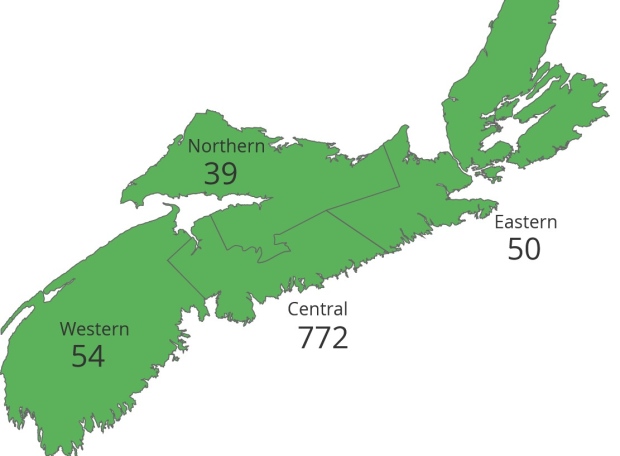 “Anybody who may have COVID symptoms, it’s important that we get you tested as quickly as possible,” said Strang. “Anybody who thinks they may have those symptoms, do the assessment, because we want to test you as part of our ongoing work.”

Is it safe to send children back to school? Doctors divided on Quebec's plan

New COVID-19 modelling shows curve flattening; up to 3,883 deaths by May 5

Many Quebec businesses, but not all, to reopen throughout May

'We share our hope': Canadian flag illuminated on Matterhorn in brilliant show of solidarity

'She was a hero': ER doctor who treated COVID-19 patients in NYC has died by suicide