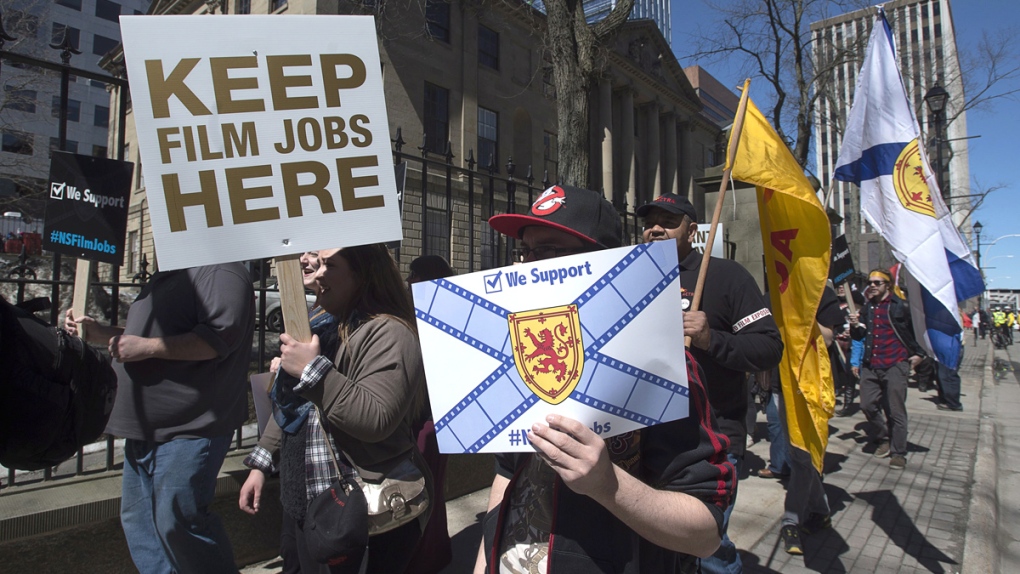 Members of Nova Scotia's film and television industry protest outside the legislature in Halifax on Wednesday, April 15, 2015. (Andrew Vaughan / THE CANADIAN PRESS)

HALIFAX -- Nova Scotia says film production in the province has gradually increased over the last two years to $102 million in 2017-18, but critics say the industry still hasn't nearly recovered from the controversial axing of the film tax credit.

Bernie Miller, deputy minister of the Department of Business, told a legislature committee on Wednesday that the figure is in line with the 10-year average before the province ended its film tax credit in 2015.

"Moving forward, production demand under the development fund looks strong," said Miller. "It's important to remember that Nova Scotia's film industry is cyclical and somewhat volatile in the short term and we need to be careful in considering not just year-over-year activity but long-term trends."

He maintained the number of jobs in the sector has increased over the past two years, but repeated that there was a boom and bust cycle even under the old tax credit system.

But Progressive Conservative Tim Houston said the province is now spending more money for film production and animation than it did under the old tax credit, and it isn't seeing a corresponding increase in jobs and production activity.

"If you are spending as much money and you have less economic activity and fewer people working, you are doing it wrong."

In addition to the $22 million figure highlighted by Miller, the province also spent $10 million on animation. Before the province eliminated the tax credit, it spent $24 million.

Laura MacKenzie, interim executive director of Screen Nova Scotia, said while there have been small improvements, employment and production levels aren't close to what they were before the tax credit was changed.

MacKenzie said the industry hasn't recovered from the loss of the tax credit, which covered up to 65 per cent of eligible labour costs.

"Absolutely not," she told reporters. "Our workers aren't working the way they used to be working."

According to IATSE, the union which represents motion picture technicians in the Maritime provinces, gross pay for its membership has fallen 65 per cent from 2014 levels.

MacKenzie said the government needs to do more to attract productions and to boost local companies.

She said that should include building a sound stage, creating an equity fund to help local producers, and increasing the base refundable portion of the current fund, which currently is 25 per cent for all production costs.

"We'd like to see at least three percentage points for talent and zoning included in our base rate," MacKenzie said.

Miller said the government is exploring opportunities around a potential sound stage, but is less open to increasing the current refundable portion of the fund.

"I don't know that there's a cause and effect between more government funding and growing the industry, because we have always had between one and two per cent of the industry," he said.

Miller said he wants to shift the discussion away from "simply adding on to the percentage of incentive" to a broader discussion of how the province can become more competitive nationally.