HALIFAX -- Canada's public safety minister promised to provide financial help to flood-ravaged parts of Cape Breton as quickly as possible Friday, following a tour of communities hit by a storm fuelled by the remnants of Hurricane Matthew.

Ralph Goodale shared his impressions of the damage and the stress it caused for the people he met during a visit to the Sydney area while accompanied by provincial Transportation Minister Geoff MacLellan and Cape Breton MPs Mark Eyking and Rodger Cuzner.

"It's one thing to hear about it long distance," Goodale told reporters. "It's quite a different thing to actually visit it in person and meet the people who are affected and sense the real shock and trauma they are going through as they try to grapple with their own personal circumstances."

He said all levels of government were determined to pull together to ensure the situation is responded to "properly and as quickly as possible."

Goodale said federal assets in the area, such as the Canadian Coast Guard College, would be put to use to help those left homeless by the storm.

He also confirmed that Nova Scotia had officially asked for assistance under the national disaster relief program and had indicated a preliminary estimate of at least $10 million in damages.

"The preliminary estimate of $10 million would seem to be eminently reasonable on the basis of what I've seen today," Goodale said.

He said the provincial government would be responsible for taking inventory of the damage and that Ottawa would process the claim "as rapidly as we can."

"The larger the bill, the more expensive this becomes, the bigger the share the Government of Canada will contribute. It could be as much as 90 per cent depending on the magnitude of the loss, but it's too early to try to be precise about the arithmetic today."

In Halifax, the Nova Scotia government announced $500,000 in emergency aid Friday to help the people affected.

Premier Stephen McNeil said the money would be given to the United Way of Cape Breton, which would be responsible for co-ordinating the distribution of the funds to those in need.

He said the money would be used for basic requirements such as food, clothing, and lodging.

"That's the initial part for us," said McNeil. "We know there will be a much bigger price tag for the province ... but we wanted to have an immediate reaction to try to put some money in the hands of people who need it the most this weekend."

The premier, who toured Cape Breton on Monday to assess the damage and told reporters that he "couldn't believe my eyes", said the government is in the midst of determining how much more financial help will be needed.

He confirmed the province had also asked for federal help in a letter to Goodale.

"In our own highway infrastructure we will be above the $3 million threshold," McNeil said. "We need to go through the process of what insurance will cover, what they won't ... but that number we know it will be much higher than the $3 million."

Homeowners, small businesses, farmers, municipalities and not-for-profit organizations will be eligible to apply once the federal funds are secured.

McNeil said the province was also sending in more environment inspectors and emergency measures personnel to beef up staffing levels on the ground with the intent of co-ordinating efforts with local building inspectors.

The mayor of the Cape Breton Regional Municipality, Cecil Clarke, welcomed the financial assistance saying it would help deal with the immediate needs of people "who are in stress."

Clarke said a help line established by the municipality at 8 a.m. Friday received 400 calls in its first three hours of operation from people whose homes or basements had been flooded.

"By the hundreds people are registering and we are triaging what are the human needs most importantly, and getting (home) inspections done right away," said Clarke.

He said a preliminary inspection that began of homes in the hard-hit Sydney area on Thursday found 17 of 18 homes uninhabitable. Mould is also expected to be a problem as hundreds more homes are inspected.

"It means in the long-term we are going to have people displaced and those are things we are trying to prepare for," Clarke said.

Parts of the Sydney area received more than 200 millimetres of rain when a storm fuelled by tropical moisture associated with Hurricane Matthew blew through the Atlantic region over the Thanksgiving weekend.

The storm system severely damaged roads and bridges and caused extensive flooding in parts of Nova Scotia and Newfoundland.

On Thursday Newfoundland and Labrador Premier Dwight Ball said his province had tallied at least $10 million in damage to roads and infrastructure but had yet to determine the costs for towns affected by the storm. 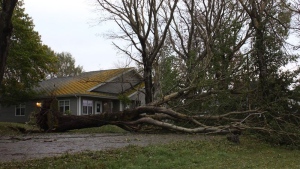