N.S. logging firm says concern for birds must be balanced against industry needs 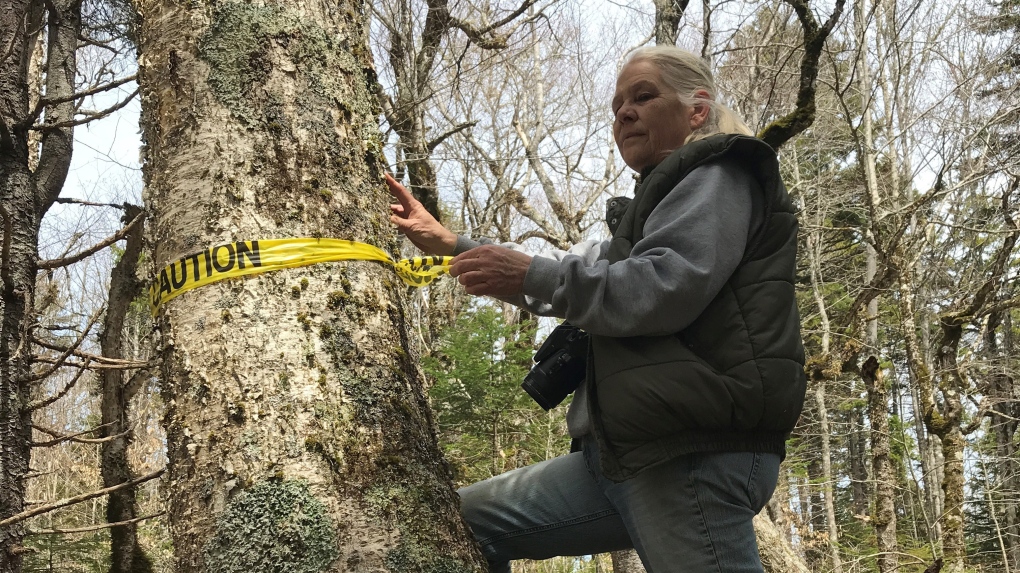 Sue Skipton measures a yellow birch tree growing atop a granite boulder in the Dalhousie Lake – Corbett Lake Crown Lands in a handout photo. The Annapolis County resident is advocating for an end to logging in the lands, as logging is set to resume on Monday in the area south of Bridgetown, N.S. (THE CANADIAN PRESS/HO-Sue Skipton)

HALIFAX -- Calls to stop logging in a Nova Scotia forest during nesting seasons of migratory birds must be balanced with the industry's practice of harvesting through the year, says the firm with cutting rights.

"If we're going to have a sustainable forest industry ... that does involve harvesting trees in a significant portion of the year," said Marcus Zwicker, general manager of WestFor Management Inc., in an interview Tuesday.

The company has approval to resume cutting on 76 hectares of Crown-owned woods located between two pristine Annapolis County lakes.

Naturalists say they have spotted more than a dozen neotropical songbirds and filmed video of one endangered species in the mixed forest.

Scott Leslie, the author of Woodland Birds of North America, says he has identified species such as the black-throated blue warbler and he has filmed the weaving acrobatics of chimney swifts, which are listed as an endangered species in the province.

"In my opinion, cutting any time earlier than the end of September (or even mid-October) would contravene the Migratory Birds Convention Act, as there is a high likelihood migratory species would still be on the site," he wrote in an email.

A spokeswoman said Tuesday evening that there is currently no "open investigation" underway into the complaints.

Zwicker says that while there has been no cutting this week, the company has the right to renew its harvesting at any time.

It will make its decisions based on weather and market conditions, he added.

The company said in an earlier email that the cutting plan is based on management guidelines approved by the Department of Lands and Forestry.

These include the protection of trees with cavities that can provide habitat for birds and that create the "super canopy" -- the upper levels of the forest.

Zwicker said that if endangered species are spotted, there are procedures in place to avoid destruction of bird habitat.

For example, there are specific buffer zones around the nests of birds of prey, depending on the time of year, he said.

Staff are trained to look out for the species as cutting areas are prepared, he added.

"For species at risk, specifically birds, turtles ... they (staff) carry field cards with the identity (of the species), pictures, and descriptions for both the logging crews as well as the forestry staff," he said.

"It is prohibited to harm migratory birds and to destroy their nests and eggs of in Canada under the Migratory Birds Convention Act and the Migratory Birds Regulations," wrote Garry Donaldson, the manager of wildlife assessment for the Atlantic division.

Donaldson said in an interview Tuesday that his service plays a role of "compliance promotion," encouraging firms to plan cuts so they avoid the breeding season.

"We are working to improve the conservation of biodiversity in the south western part of Nova Scotia which includes the area around Corbett and Dalhousie Lakes," says the letter he sent to complainants.

"This work is in one of 11 areas identified nationally for concerted conservation attention."

Donaldson said the wildlife service isn't solely interested in endangered species but has a wider concern about the species being found in the woodlands.

"I saw a list of 13 species there, a number of which are in decline, so we're similarly concerned with those birds as well," he said.

Iain Rankin, the provincial minister of Lands and Forestry, says Nova Scotia and most other Canadian jurisdictions allow forestry during nesting season with measures put in place to avoid destruction of habitat.

However, he says he is aware of the bird sightings and has passed on the information to WestFor for its consideration.

"Whenever we do get information, we ensure the licence holder is aware," he said in an interview Tuesday.