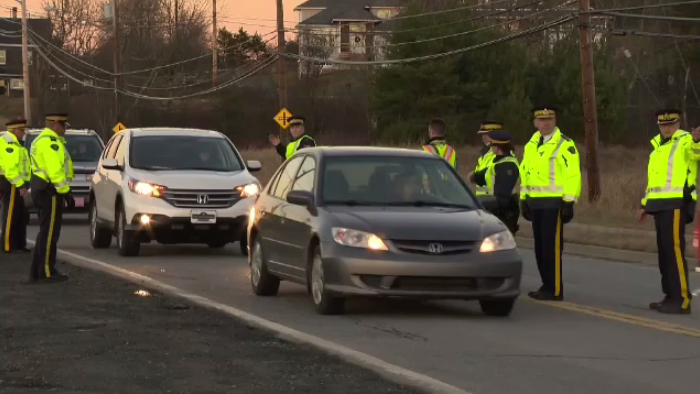 HALIFAX -- Saturday marked National Impaired Driving Enforcement Day in Canada – a day when police across the country make a concerted effort to ensure impaired drivers stay off of roads. With the arrival of the Holiday, police say it’s the only way to help keep roads safer.

"One is too many. So, if you have 19 people passing away as a result of impaired driving – that's nineteen too many, and we need to be out there," says RCMP Traffic Enforcement unit commander, Sergeant Mario Maillet. "All RCMP are being proactive to enforce impaired driving."

The RCMP’s efforts are appreciated by those who live in the area. In 2006, Moncton resident Jeff Wilson lost a friend who got behind the wheel after consuming too much alcohol.

"He was out drinking and driving, and he lost control, and he ended up flipping into a pond, and he didn't come back up,” says Wilson.

Another resident affected by impaired driving is president of the Mother's Against Drunk Driving Southeastern New Brunswick chapter, Diane Mollins – who began her advocacy work after two deadly crashes.

MADD recently launched its annual Red Ribbon campaign – asking drivers to keep a red ribbon close as a reminder. Mollins says the ribbons can be placed anywhere in a car including handles, steering wheels, rearview mirrors – anywhere they can remind drivers questioning their driving abilities.

Weldon says he's heard too many stories at the Moncton Courthouse of victims who were killed by drunk drivers. He says the same thoughts run through his mind at every hearing.

"Why are you doing this? And why would you get behind the wheel of a car knowing how much it can impact somebody?" says Weldon.

Mollins says, nationwide, there are four deaths a day and approximately 176 injuries a day - related to impaired driving.

And it’s not only alcohol that is causing impairment. RCMP say they’re also targeting drivers under the influence of drugs as well.

"Now we have a lot of the tools that we need in order to tackle the drug-impaired driving with roadside screening,” says Maillet. “Therefore, there definitely is an increase in that.

Meanwhile, RCMP say they cannot be everywhere at once – adding they rely on the public to assist them by reporting drivers that they suspect are under the influence.