"This is a battle and we must fight to win," New Brunswick Health Minister Ted Flemming said Monday at a news conference in Fredericton.

"What we are essentially doing today is implementing a military-like command and control protocol with respect to this virus. Typically, a command centre makes decisions, they make them quickly, and they deliver those decisions fast."

COVID-19 is evolving quickly, Flemming said, and it's not enough to simply stay on top of it -- the province must stay ahead of it.

"The virus moves at its own relentless pace," Flemming said. "We have to be ahead of that."

New Brunswick Premier Blaine Higgs also said a group of experts will be called upon as needed to provide advice to the task force.

"The situation demands that the province be able to react rapidly and effectively to ensure we minimize the impacts of this insidious virus on our citizens," said Flemming. "This task force has been granted clear authority to ensure timely and effective decisions are made in real time."

Of the 103 cases, 59 are travel-related, 33 are close contacts of confirmed cases, six cases are the result of community transmission and five cases remain under investigation.

Nine people were hospitalized and two have since been discharged. Three of the seven patients still in hospital are in the intensive care unit.

To date, 30 people have recovered.

Both of the new cases are in Zone 1, the Moncton region, and both are close contacts of previously confirmed cases, Russell said. The people are aged 20 to 29 and 40 to 49.

In what has become an almost daily reminder, Russell said staying away from other people and using proper hygiene are the best ways to avoid getting COVID-19 and the best ways to prevent the spread.

Gilles Lanteigne, the CEO of the Vitalite Health Network, said it's crunch time in the fight to prevent the spread of COVID-19.

"According to specialists, the next few days will be decisive," he said. "We will find out whether our collective physical distancing and isolation efforts will have the expected impact in slowing the spread of COVID-19 in our communities."

Flemming reminded New Brunswickers of what the "novel" means when referring to COVID-19 as a "novel virus" -- it means the body cannot build immunity to it.

"This I going to be defeated outside the hospital, not inside it," Flemming said. "There is no cure for this."

He reminded young people, especially, to be more considerate of others in how they can prevent the spread of the virus.

"They might not get too sick, but they may kill their grandparents," Flemming said. "It's not just about you."

For the first time, on Monday, there was new advice from an infectious disease specialist on who -- other than front-line healtch-care workers -- can benefit from wearing a mask.

"In the interest of safety, wearing a mask when you are out in public is an area that was previously of uncertainty," said Dr. Dow. "But, as you know with this pandemic, things are changing all the time and our advice is changing with new evidence and so we are recommending that people start to wear a mask in public."

Russell cautioned people not to buy up surgical masks -- as those should only be used by health-care workers. She suggested wearing a face cover when you're grocery shopping or running errands.

Nine tickets issued over the weekend

Most are following the physical-distancing guidelines, and police have mostly been educating those that aren't, but the province announced police have had to issue tickets in a small number of cases.

"Nine tickets were issued over the weekend to people failing to comply with the emergency order," the government said in a news release. "Fines can range from $292.50 to $10,200. People are reminded that they must stay at least two metres from others and must not form a crowd."

The province received an expected shipment of 5,000 COVID-19 test kits. 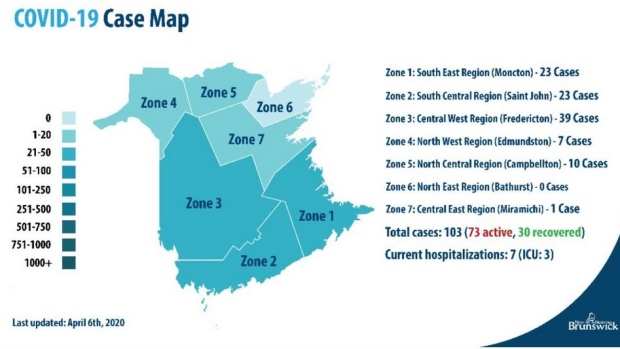 New Brunswick has updated its case map online. There are now seven hospitalizations and three of them are in the ICU.