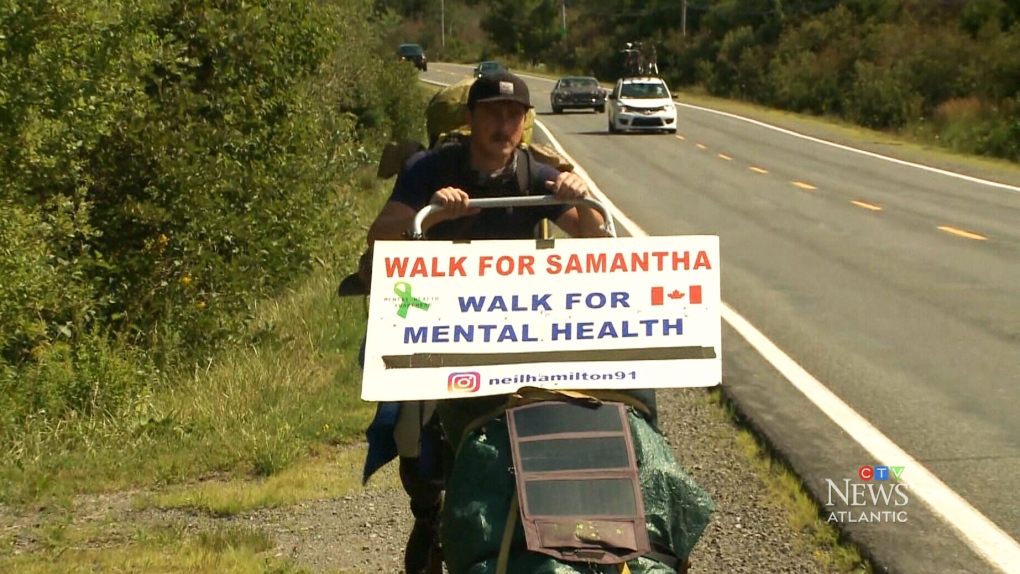 A man from Peterborough, Ont. is in the Maritimes this weekend as he walks across the country to raise awareness for mental health.

Neil Hamilton says the mental-health system let him down after he witnessed a fatal head-on collision that claimed the life of a 35-year-old woman named Samantha.

"It was an awful scene and I struggled with that for a long time afterwards," said Hamilton. "For a good year-and-a-half, I just let my life fall apart. I just gave up on everything."

It was in 2017 that Hamilton's life changed for the worst when he witnessed the horrible crash on an eastern Ontario Highway.

After several attempts to pull Samantha from the wreckage, she died.

"I wasn't eating, I wasn’t sleeping, or quite the opposite," explained Hamilton. "Some days, I'd sleep all day and do nothing at all. I started to not leave my apartment. I pushed all my friends away. I started to get really violent."

Two-and-a-half years later, Hamilton was diagnosed with PTSD. When he went searching for help, he was put on a two-year waitlist.

"The services just aren’t around. There's not enough trained professionals in this country to help take care of it," said Hamilton. "And those that are here, are so overloaded with patients, they kind of have to pick and choose."

"We don’t allow people to suffer from physical illness, so why would we let people suffer from mental illness that way?" said Hamilton.

Hamilton will be in Halifax in a couple weeks. While walking in Nova Scotia, he plans to raise funds for the Mental Health Foundation of Nova Scotia, which works to eradicate the stigma around mental illness and addiction, and also increase financial support to community initiatives in the province.

Hamilton's trek across the country began in Newfoundland in April. He hopes to cover up to 7,000 kilometres from coast-to-coast.