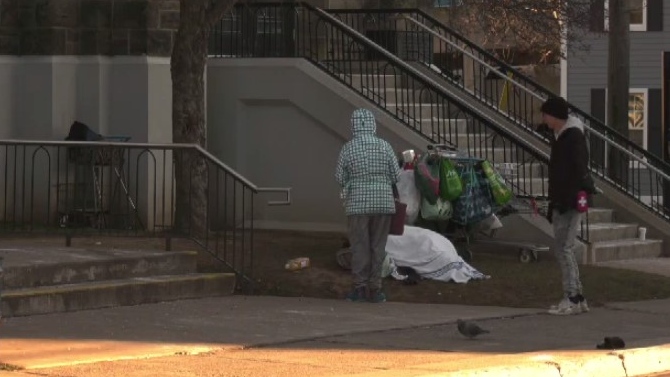 The director of a Moncton overdose prevention site says New Brunswick's decades-long inaction on homelessness is responsible for the death of a man who could not access a shelter bed.
MONCTON, N.B. -

Before a man turned away from shelters was found dead this week in a Moncton, N.B., public washroom, staff who had just helped him at an overdose prevention site sent a plea for help to the province.

Debby Warren, the executive director of the non-profit group Ensemble Moncton, emailed the social development minister, local members of the legislature and city staff Monday evening "in desperation" after being told all shelter beds in the city were full.

"We work so hard to keep people from dying of an overdose, only to have them turned away from services at risk of hypothermia from sleeping outdoors," Warren wrote.

Warren said in a recent interview that her staff and first responders revived a man after an overdose at the site Monday afternoon then spent hours trying to find a warm place for him to stay.

All beds were full at the city's two shelters, and Warren says she was told by the person who answered the provincial Department of Social Development's emergency line that the province no longer covers emergency hotel stays.

In an interview Friday, Social Development Minister Dorothy Shephard said she was not aware of any change in policy for emergency shelter, adding that she will follow up with her department on this particular case.

After the man in his 20s was revived, he refused to go to hospital and left the centre after telling Ensemble staff he would try to get into one of the already-full shelters.

Warren said the man, whose identity has not been made public, was found dead the next morning in a washroom outside Moncton City Hall that is heated just enough to keep pipes from freezing.

"We are in the midst of a crisis," Warren said, adding that the number of people experiencing chronic homelessness is higher than she has seen in her 22-year career.

"We have more problems than we ever had before, and we kept forecasting this. This is the price of doing nothing," she said of the Moncton man's death.

The minister said there are 224 shelter beds in Moncton. She acknowledged that is not enough for the number of people experiencing chronic homelessness, though she could not say exactly how many people in the city are without housing.

Warren said providing shelter is the first step, but it is not enough, as the situation is made more challenging due to the opioid crisis. Warren and her staff have seen an increased frequency of overdoses over the last few years, she said.

From what staff are seeing at Ensemble, Warren said it would appear that drugs that contain fentanyl are becoming much more common in Moncton. "We're in dire straits. People are dying of overdoses," she said.

Shephard agreed the problem extends beyond housing and said her department and the Health Department will work together to improve services for people struggling with addiction.

In another twist to the story, the RCMP acknowledged Friday that they initially misidentified the man found dead by city hall. The family of a man who was incorrectly identified as the deceased said in a statement Friday they will be pursing legal action against the police for "traumatizing" the family by telling them their son was dead when he was in fact alive.

A spokesperson for the New Brunswick RCMP said in an emailed statement that RCMP are aware of possible litigation regarding the misidentification of this victim and police are in communication with the family.

Based on Justin Trudeau's first-day fail in the House of Commons, 'meeting the moment' is destined to become the most laughable slogan since the elder Pierre Trudeau’s disastrous campaign rallying cry in 1972, which insisted 'the land is strong' just as the economy tanked.

A young Black woman who resisted her own enslavement in Queenston, Upper Canada, in the late 18th century is being honoured by Canada Post.

Canada's financial intelligence agency is stepping up the fight against the illicit wildlife trade by taking aim at the criminals who reap big profits from the global racket.

A suicide bombing that struck inside a mosque at a police and government compound in northwest Pakistan reflects 'security lapses,' current and former officials said as the death toll from the devastating blast climbed to 100 on Tuesday.