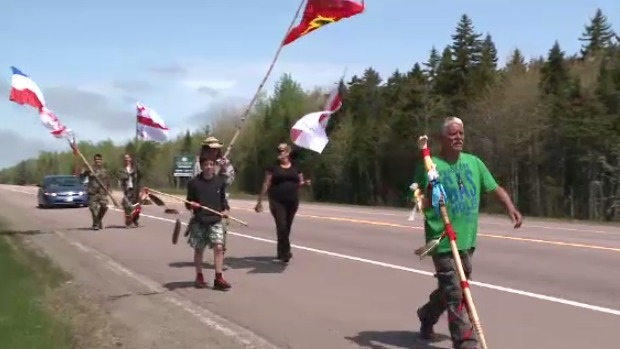 Shale gas exploration in New Brunswick may be quiet right now, but opposition to so called “fracking” continues.

Beginning Saturday, about a dozen shale gas opponents will walk about 90 kilometres on Route 11, from the Elsipogtog First Nation to Moncton. They are walking to deliver a message.

“They are letters from the communities. From Elsipogtog, Rexton, Richibucto, Moncton, Shediac, everywhere, and we are going to hand deliver these messages just like our people would have,” says organizer Debbie Cyr.

Houston based SWN Resources recently encouraged the public to express their views on shale gas fracking in New Brunswick.

“They asked for what we thought about shale gas, so we are hand delivering our letters there, making a few stops along the way,” says protestor Isaac Cyr.

Shale gas fracturing has been a divisive issue in the province.

The Alward government has been its lead proponent, issuing exploration permits to SWN Resources. The permits stated the province needs the economic activity to deal with debt and workers heading out west.

The New Brunswick’s Liberal party, which opened the door to shale gas under previous government, is now calling for a moratorium.

An environmental studies professor says shale gas could be a game changer in the September provincial election.

“This is going to be a big issue in the election and the outcome of the election could have real consequences for the policy on shale gas in this province,” says Mount Allison Environmental Studies professor Bradley Walters.

Protests against shale gas began at the Elsipogtog First Nation about a year ago.

Organizers said on Saturday they will protest “fracking” for as long as it takes to stop this project.

“SWN Resources keeps saying they are going to come back, but the thing is, we haven’t left,” says Debbie Cyr. “This is our land, our territory.”