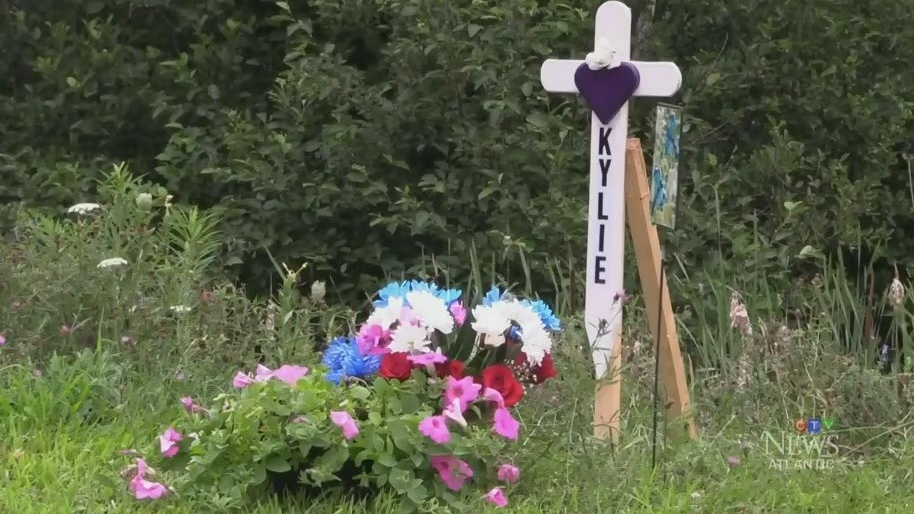 A roadside memorial for 15-year-old Kylie Cooper is seen in Wellington, N.S.

HALIFAX -- They can be found in every corner of the country -- makeshift roadside memorials that serve as reminders of fatal crashes or, in some cases, violent crimes.

Often adorned with flowers or flanked by candles and faded stuffed animals, these markers of public grief are typically regulated by municipal bylaws that limit where they can be placed on public property and for how long.

But there are no such rules in Halifax, where an ugly dispute over a simple wooden cross has prompted municipal politicians to contemplate new rules that some have already criticized as insensitive.

"Council is in a very difficult position," Coun. Steve Streatch said in an interview Monday -- a day before council was scheduled to discuss the matter. "We have to find a balance."

The issue flared last summer when municipal workers removed a humble memorial for 15-year-old Kylie Cooper, who was killed last June in a collision on Highway 2 in Wellington -- part of the Halifax Regional Municipality.

City officials said they were responding to complaints about an object on the municipality's right of way near a subdivision, but Cooper's mother said the move was cruel.

Streatch, the councillor who represents the area north of Halifax, returned the cross to the side of the highway and persuaded regional council to ask staff to draft recommendations for new rules.

A staff report released last week recommends a one-year time limit for roadside memorials, a restriction that many other municipalities have imposed in other parts of the country.

However, Streatch says he's not comfortable with the 12-month deadline.

"I'm not sure how relevant that is," he said. "It's a number that was picked out of the air."

He said it would be a mistake to ask city workers to remove memorials exactly one year after they were installed because the anniversary could mark an important point in the grieving process.

"As you approach the one-year anniversary of any tragic incident, the last thing you want to do is go out the next day and remove something that allowed you to help with the grieving process."

In some municipalities the limit is only six months.

"I'm not convinced there should be terms at all," Streatch said. "I think each situation is different. Everybody grieves differently. Everybody has different ways of dealing with these things."

The staff report says roadside shrines should not require permits, but they should include the name and telephone number of the person responsible for the marker and the date of installation.

Other recommendations include limiting the size of memorials to 90 centimetres by 90 centimetres, and prohibiting attachment to utility poles, bus shelters, hydrants, traffic signs and other traffic control devices.

"Persons placing the memorial should be respectful of adjacent property owners and/or commercial businesses," the report says, though it doesn't explain what that means.

"If the roadside memorial becomes unsightly and not maintained, it may be removed and disposed of by HRM staff."

City officials also made it clear that some sort rules should be put in place.

"Due to the lack of policy, there have been roadside memorials removed from HRM right of way, which has caused distress to those members of the public who placed the memorials, as well as HRM staff involved in the removal," the report says.

It says memorials must not present a hazard to those using or maintaining roads and sidewalks, and they can't cause "sightline obstructions" or significant distraction to motorists.