The Greater Moncton SCPA gets creative with fundraising efforts 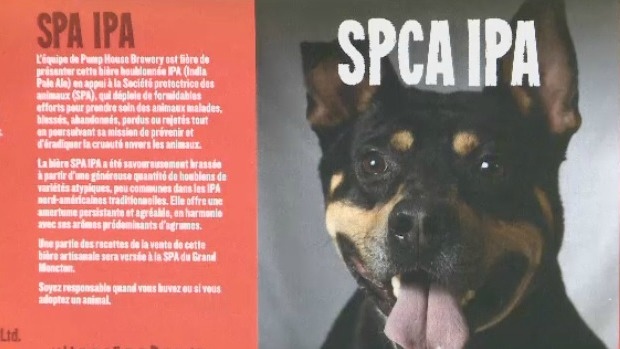 The Pump House Brewery has placed shelter animals on the labels of an India pale ale and a portion of the proceeds from the SPCA IPA will be donated to the shelter.

The Greater Moncton SCPA is getting creative in its efforts to find their animals new homes.

The shelter never turns animals away, which means fundraising is critical to be able to provide for them all.

“The SPCA here in Moncton is an open shelter. We see anywhere from 3 to 7,000 animals a year,” says executive director Karen Nelson.

Nelson has a few campaigns on the go to help provide the animals with proper health care, food, and a warm place to stay while waiting for adoption.

“Brand new this year is our own SPCA Christmas balls, we did the design ourselves,” says Nelson.

The Greater Moncton SPCA needs to raise $700,000 every year just to keep their doors open.

Coming up with new and fresh fundraising initiatives can be difficult, which is why they jumped at the chance to team up with a local brewery.

The Pump House Brewery has placed shelter animals on the labels of an India pale ale and a portion of the proceeds from the SPCA IPA will be donated to the shelter.

To date, 20 of the 24 animals featured have been adopted.

“That's been a terrific awareness program,” says Nelson. “It's very hard to find the beer, it's selling out quickly in the stores. People are using them for Christmas gifts, stocking stuffers and collectors’ items, so we're very excited about this project.”

While Nelson says she'd love to see all the animals go to a new home, she cautions people about giving animals as Christmas presents.

“If you want to give the gift of adoption that's great, but not the animal, pay the adoption fee and then have the person come and look at the animal and pick the right one for them,” says Nelson.

If you’re not ready for a new pet, there are lots of other ways to contribute to their future.