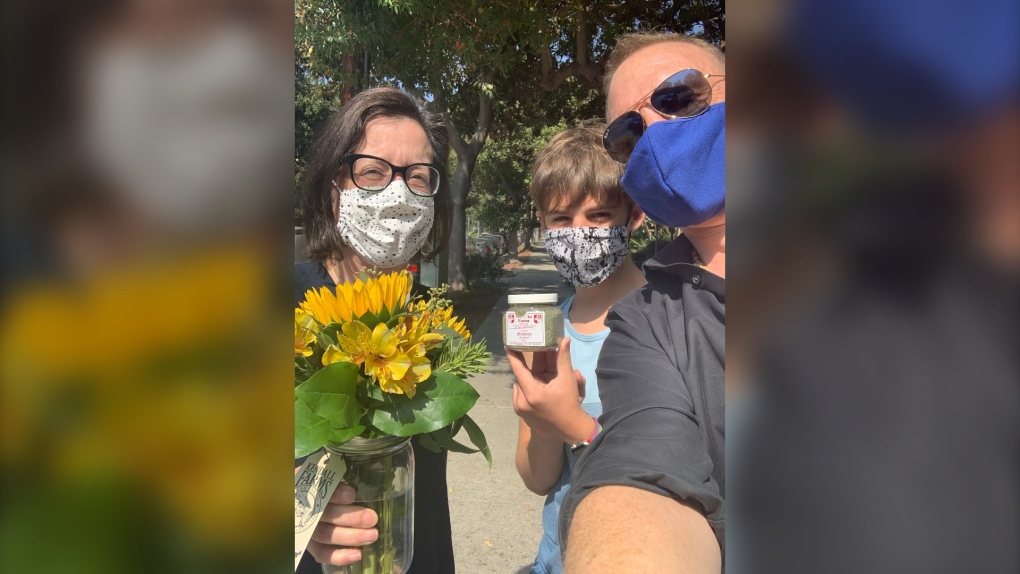 Chad Richardson, right, is shown in this group selfie after picking up a jar of savoury from Tina Cornejo, left, in this recent handout photo. A Newfoundlander in Los Angeles will be giving thanks for Twitter as he tucks into a feed of dressing Monday night after a savoury saviour answered his plea for seasoning. Richardson was taking stock of his Thanksgiving dinner supplies Saturday, when disaster struck: he was out of Newfoundland savoury. The pandemic had cancelled his annual trip home to St. John's, N.L., where he normally replenishes his stash. THE CANADIAN PRESS/HO - Chad Richardson

LOS ANGELES -- A Newfoundlander in Los Angeles will be giving thanks for a savoury saviour Monday night as he tucks into a holiday dinner made possible by the magic of social media.

Chad Richardson was taking stock of his Thanksgiving dinner supplies on Saturday when he was struck by a hard truth: he was out of Newfoundland savoury.

The pandemic had cancelled his annual trip home to St. John's, N.L., where he normally replenishes his stash of the homegrown herb.

Richardson has lived in Los Angeles for the past 17 years, where he works in the music industry. He grew up in St. John's, home of Mt. Scio Farm, where the quintessential Newfoundland seasoning is grown. Sold in baggies and plastic jars, it's also known as "Mt. Scio savoury" and is an essential ingredient in Newfoundland stuffing or "dressing."

"It has a completely unique taste unto itself," Richardson said. "It's one of those wonderful unique flavours. The taste of savoury, for me, is the same as when I go down to the water here. My son complains that it stinks of fish, but to me, that's home.... And when I taste savoury, it's home."

And being away from home is hard, Richardson said. His whole family is in St. John's, and he's alone with his 13-year-old son in Los Angeles, he said. The seasoning adds more than just flavour.

So he turned to Twitter, posting Saturday night: "Legit ask... please pass along. Any Newfoundlanders (or anyone really) in LA with some extra savoury for turkey. I thought I had more but I'm out..I will drive to you... will pay top dollar."

Richardson said he did not have much faith that the call-out would pay off.

"But I did know that if somebody did have it, I'd be getting it, because that's how Newfoundlanders are," he said.

Less than 24 hours and more than 200 retweets later, Richardson and his son were making the 40-minute drive to Pasadena to pick up some of the sought-after spice.

N.L. comedian Mark Critch had retweeted Richardson's plea and Tina Cornejo had seen it. Cornejo grew up in the U.S., but her mother is from St. John's and Newfoundland and Labrador was always a big part of her family's culture, she said.

That, of course, includes having Mt. Scio savoury on hand.

"I know how critical it is to have Newfoundland savoury for dressing when that's home for you," Cornejo said Sunday night.

Cornejo's mother was concerned her daughter's savoury would be too old and dry for Richardson's dinner, she said, but Richardson insists her fears were unwarranted.

"I said, `My dear, they could discover Newfoundland savoury in an Egyptian tomb and it would be fine.' That would last through a nuclear blast, I swear to God," Richardson said. He normally buys the 60-gram plastic jars of the savoury and goes through them in three years or so.

"They only get better with age," he said.

Richardson planned to make his Newfoundland savoury dressing Monday afternoon for the big Thanksgiving meal in the evening.

Meanwhile, a group selfie he posted to Twitter -- showing Cornejo holding the flowers he'd brought her and his son holding the savoury she'd given them -- continues to attract comments, likes and retweets. He said he'd received a lot of direct messages from people asking what savoury was and saying they were happy he'd found it for his Thanksgiving dinner.

"People are truly yearning for happy moments like this," he said. "It's a little bit of light in the tunnel and I hope once this is all over we all remember these moments."

This report by The Canadian Press was first published Oct. 12, 2020.