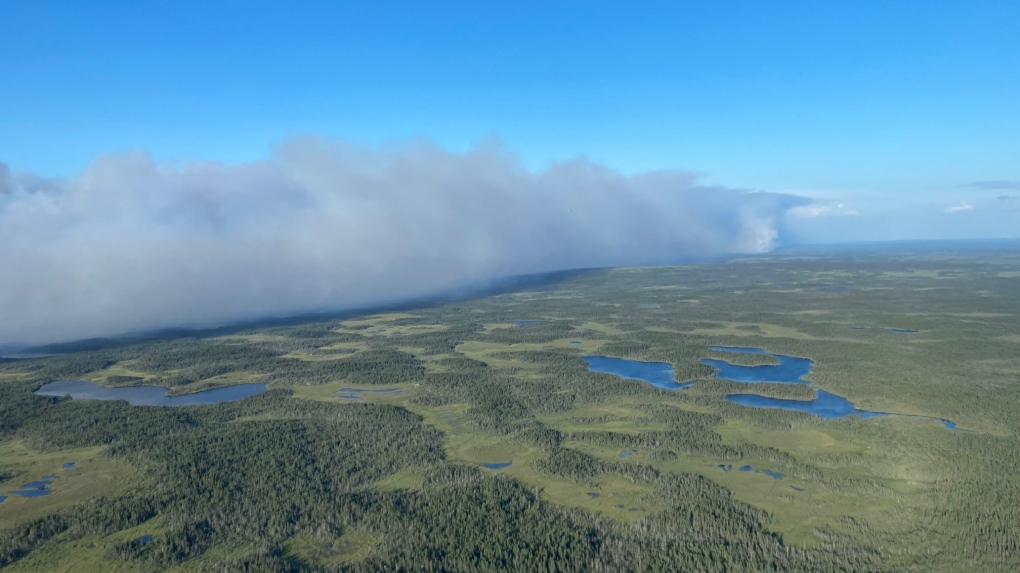 Two municipal officials serving Newfoundland's south coast say the wildfires that temporarily cut off the area's main grocery supply was yet another major challenge after more than two years of extraordinary difficulties.

Steve Crewe, mayor of Hermitage-Sandyville, and Roy Drake, deputy mayor of Harbour Breton, said in recent interviews that COVID-19 and the provincewide doctor shortage were already taxing volunteer officials in their area.

Though neither have any regrets about the many years they've spent on council -- nor about the many hours they spent organizing emergency deliveries of food and supplies last week -- Crewe said it would be nice if rural mayors, deputy mayors and councils had more support.

"It's becoming a full-time job, and you're trying to balance your life with your own job," Crewe said. "I don't know if they'll ever come up with, say, a basic income for mayors, because it's getting really hard to do. And you're getting less and less people running."

Crewe, 44, was first elected to his town's council when he was 23. He has a full-time job with Bell Aliant. Drake, 49, has been on council for 13 years, though not consecutively. He owns and runs several local businesses to get by.

Both are remarkably good-natured about the amount of unpaid political work they do, and neither expect to give up their council jobs any time soon.

Unlike their counterparts in Nova Scotia and New Brunswick, municipal officials in small, rural Newfoundland and Labrador towns are often unpaid. The province of nearly 523,000 people is home to around 270 municipalities, and 78 per cent of those communities have fewer than 1,000 residents, said Amy Coady, who is president of Municipalities Newfoundland and Labrador.

About 55 per cent have fewer than 500 people, she said in a recent interview.

Harbour Breton is home to about 1,600 people. Hermitage-Sandyville has about 420 residents.

All towns have the power to pay their mayors and councils, but they often don't have the revenue, Coady said.

"Sometimes offering a remuneration to your councillors could mean the difference of being able to do important work, whether it's infrastructure or being able to hire additional staff," Coady said. "So they will do the work strictly on a volunteer basis, knowing how much time, how much effort and how much pressure it is to serve as a municipal councillor."

On July 24, lightning strikes set off two wildfires south of Grand Falls-Windsor, one of which crossed the Bay d'Espoir Highway, which is the only road connecting communities like Harbour Breton and Hermitage to the rest of the province. The fires are still burning, and they caused intermittent shutdowns of the 200-kilometre rural road, including a closure stretching from the morning of Aug. 4 to last Tuesday.

The highway closure stopped regular deliveries from grocery and supply trucks, and the towns' stores began running out of food.

Crewe and Drake put in long hours at their town halls co-ordinating deliveries of supplies by helicopter, as well as the networks of volunteers that would greet the choppers and unload the goods onto waiting trucks, which then brought the food and supplies to the surrounding towns.

Crewe said he'd show up early in the morning to co-ordinate, then leave to put in a paid workday, and then be back at the town hall until late at night. At home, he'd answer Facebook messages until he fell asleep. There were three conference calls a day, and the local municipal officials had their own chat group to co-ordinate.

Most officials were new to the councils, he said -- many long-standing municipal officials gave it up after the stress of the COVID-19 pandemic.

"COVID changed everybody's attitudes," Crewe said, adding, "The social media aspect of it is hard. You get attacked, you don't get a break from it anymore."

The doctor shortage in the province has also been extremely difficult, Drake said. Harbour Breton is home to the only hospital in the area, but its emergency room is often closed because the town's only remaining doctor can't keep it open by himself, he said. Residents want answers and solutions, and they want the town council to keep pushing the provincial government to do something.

"You see the ambulance pass by here, and I'm next door to the hospital, and you know they're driving 225 kilometres before they get help," he said, the frustration clear in his voice.

When asked what municipal officials like him need to keep going, Drake answered without hesitation: "support."

The Newfoundland and Labrador government is looking to establish a regional government structure that would allow resource-sharing across communities while maintaining the independence of individual towns. Each region would have between 5,000 and 50,000 people, according to a report released in February by the Department of Municipal and Provincial Affairs. The report includes a timeline for full implementation by the end of 2024.

An Ontario woman who was sexually assaulted by Hedley frontman Jacob Hoggard in a Toronto hotel room nearly six years ago says her life was 'shattered beyond recognition' as a result of the incident.

What is the Canada-U.S. Safe Third Country Agreement?

The Supreme Court of Canada is set to hear a case brought by several human rights organizations seeking to overturn Canada-U.S. Safe Third Country Agreement. CTVNews.ca breaks down what the agreement entails.