After N.B. all-star team’s surprise victory, could the CPL come to Moncton?

After N.B. all-star team’s surprise victory, could the CPL come to Moncton? 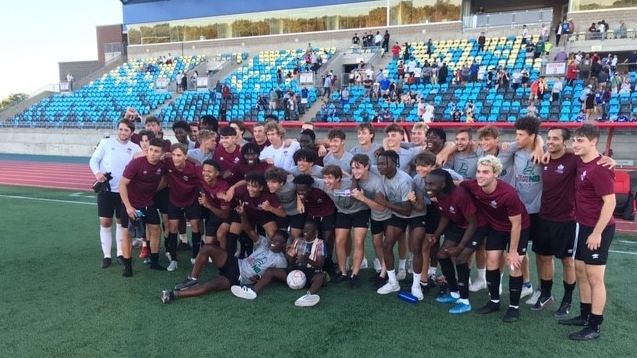 It was pure jubilation for a group of New Brunswick university all-stars who defeated an English professional soccer club Saturday night in Moncton.

The team, which was just put together last week, surprised Sunderland Football Club U23 3-0 at Croix-Bleue Medavie Stadium on the campus of Université de Moncton.

Sunderland AFC is a professional team that plays in the second tier of English soccer, one level below the Premier League.

Héritier Masimengo, a player with the hometown Université de Moncton Aigles Bleus soccer team, was speechless after the game.

"It was an amazing experience. It was incredible. I'm at a loss for words," said Masimengo.

Sunderland AFC is on a mini-Canadian tour and will also play games in Regina and Charlottetown. Event promoter John Graham said the Maritimes are more than capable of hosting a professional team from England.

He said it's a big deal having the club here.

"I think when you have anybody travelling international and comes into your market, and they're professional in another country, I think it opens everybody's eyes to what our local talent is," said Graham.

"I think it's great for the community to have a professional soccer team of any calibre here," said Di Donato at halftime. "Soccer has actually grown quite a bit here in Moncton, especially with new immigrants coming into the country. They like to see the game develop and it just reminds them of back home."

The question a lot of people were asking in Moncton this week is whether the city support a team in the Canadian Premier League. The Halifax Wanderers draw large crowds to their downtown stadium. Could Moncton do the same?

"I think we could," said Di Donato. "We have the facilities, we have the drive, the motivation and the love of the game. So personally, I do think we could have the same thing as they have in Halifax, and it would be great to see."

Shane Porter, the manager of venues for the City of Moncton, said there are a lot of eyes on Halifax's success story with the Wanderers right now.

"I know there's a lot of eyes on Moncton as a potential city for a team of that nature. Obviously, it's something we're looking towards, but we're not quite there yet."

Next up for Sunderland AFC is a midweek game in Regina before returning to the Maritimes for two weekend matches in Moncton and Charlottetown against a professional team from Montreal.

The English squad will play CF Montreal U23, a Major League Soccer team, Friday night in Moncton and Sunday in Charlottetown.

Montreal Canadiens star goalie Carey Price reversed course and said he did in fact know about the 1989 Polytechnique shooting spree that killed 14 women in Montreal despite previous comments from Groupe CH that he didn't. He also apologized to those that may have been upset by his comments made on Instagram against the proposed federal gun legislation.

Alberta secures 5 million bottles of children's pain and fever meds to distribute across province, then country

Alberta Health Services has procured five million bottles of children's acetaminophen and ibuprofen and will distribute the drugs first across the province, then across Canada, the Alberta government says.

Canadians look to side hustles to make up for inflation pressure, but at what cost?

Canadians' budgets are being stretched thin as the cost of living climbs -- and to compensate, some are taking on a side hustle.