Food becoming bigger part of tourism industry in the Maritimes 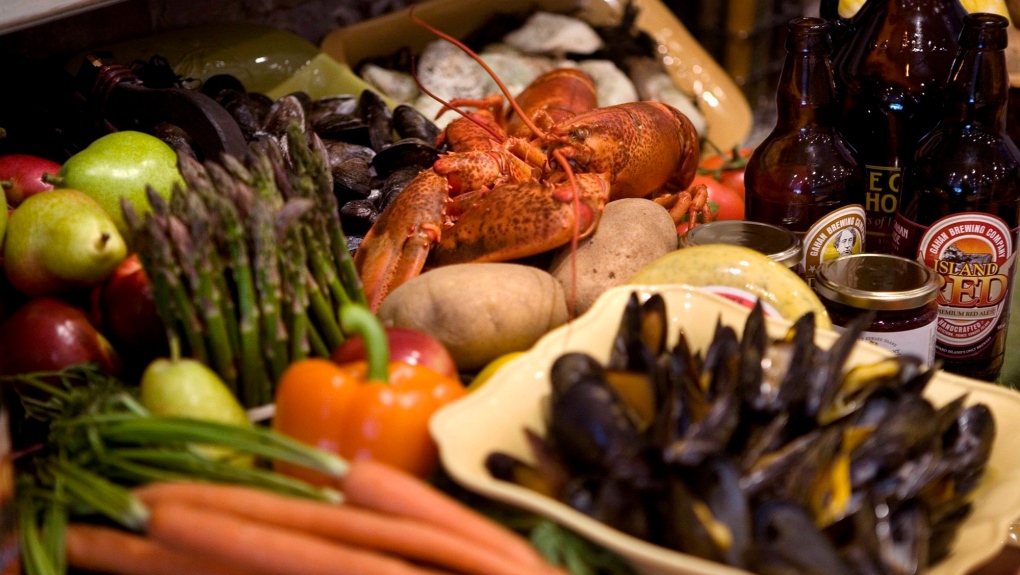 Chef Michael Smith, not pictured, shows off a smorgasbord of lobster, mussels, asparagus, and other cherished foods of P.E.I., in Toronto, Wednesday, July 8, 2009. (THE CANADIAN PRESS/Darren Calabrese)

FREDERICTON -- The Maritime provinces have long drawn people seeking beaches and beautiful scenery, but now chefs, brewmasters and tourism operators in the Maritimes are increasing efforts to cultivate and promote food tourism in the region.

Prince Edward Island and Nova Scotia started the trend with such successful events as Fall Flavours and Devour, bringing together top chefs to show what the region has to offer. And last month, New Brunswick hosted the first annual Eating Heritage conference.

The sold-out, three-day gathering in Dieppe, N.B., saw 250 industry leaders discuss ways to highlight seafood and other food and beverages unique to the province.

"People are looking for destinations where they can get the taste of a place. They want to experience what the locals experience," said Catherine Bourque, one of the conference organizers.

"Before people travel to places, they are looking up local restaurants and local breweries, because they are looking for the local experience. We really think New Brunswick can be on the map for food tourism."

Gary Howard, vice president of communications at CAA Atlantic, said travellers now are looking for more than just lying on a beach. He said they are seeking out "dining experiences," which can even involve immersion in the preparation of food. "It's becoming more and more popular across the world in places like Tuscany and Costa Rica and California, but even here in Atlantic Canada we have some really big foodie events," Howard said.

He cites as an example chef Michael Smith's Inn at Bay Fortune on Prince Edward Island, where visitors can spend an entire evening learning and participating in the meal preparation. He said other events are attracting visitors to large and small communities across the region.

"We're pretty good at it, especially when it comes to seafood," he said.

Chef Pierre Richard said he's seen the popularity of food tourism grow over the last 10 years in his time at Little Louis' Oyster Bar in Moncton.

He said New Brunswick has something distinctive to offer visitors because of its proximity to both farmland and the ocean. He said people want fresh products, and they want to know exactly where their food is coming from.

Little Louis' is one of 17 restaurants in the region given a four-diamond rating by CAA and AAA, but Richard said tourists are craving both high-end restaurants and more simple offerings.

"It's not just high end. There's also the fish fry places, or a spot where you can get awesome fried clams. There are places with traditional Acadian dishes that are unique to specific regions that are also turning heads," he said.

Richard said New Brunswick has some catching up to do when it comes to hosting a large food event like P.E.I.'s seafood festival or winery tours in Nova Scotia. He suggests the theme for New Brunswick could be based on maple syrup.

Howard said one component that's been a common draw for tourists in each of the provinces has been the rapid growth of the region's craft beer industry. Many have tasting rooms and restaurants to sample beer, wine and other beverages and see how they can be paired with local food.

"With the food scene growing, we are definitely a world-class destination," Richard said.

This report by The Canadian Press was first published Dec. 2, 2019.