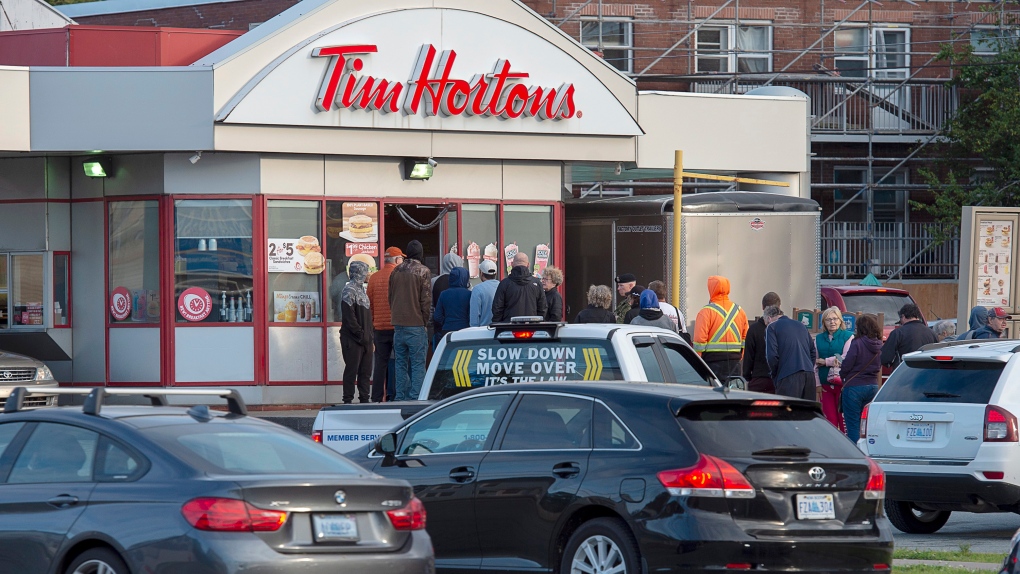 Customers line up at a Tim Hortons on Sunday, Sept. 8, 2019. The City of Fredericton will spend $40,000 to direct motorists around a busy Tim Hortons, in the latest move by a Canadian municipality to curb traffic headaches and other concerns caused by restaurant drive-thrus. (THE CANADIAN PRESS/Andrew Vaughan)

The City of Fredericton will spend $40,000 to direct motorists around a busy Tim Hortons in the latest move by a Canadian municipality to curb traffic headaches and other concerns caused by restaurant drive-thrus.

At a transportation committee meeting this week, councillors approved the plan to construct a "traffic circle" at the end of the city's Wallace Avenue and to introduce a bylaw banning left turns into the restaurant's drive-thru.

"There are significant impacts on traffic flow on this major northside arterial as well as traffic and pedestrian safety concerns as frustrated drivers start making unpredictable movements to avoid queued vehicles," the administrative report on the proposed changes says.

The New Brunswick capital is the latest Atlantic Canada municipality forced to consider the tension between public safety concerns and motorists' convenient access to a quick coffee or lunch.

This summer, Paradise, N.L., rejected an application for a drive-thru restaurant planned near an elementary school after parents and community members raised safety concerns. A spokesperson for the town said the decision is being appealed.

Halifax, which is considering expanding limits already in place around new drive-thrus in the city's downtown, was forced to contend with the issue this month after post-tropical storm Dorian hit Nova Scotia.

Officials asked drivers to stay home in the immediate aftermath of the storm, with Erica Fleck, the city's assistant chief of community risk reduction, noting that hundreds of cars backed up at drive-thrus were impeding cleanup efforts.

South of the border, Minneapolis, Minn., adopted an ordinance last month banning the construction of new drive-thrus in all areas of the city. It said the ban is aimed to fulfil land-use, transportation, and environmental goals.

The Associated Press reported Minneapolis was the first American city of comparable size to enact a city-wide ban -- but the move was not without pushback from retail developers. And the editorial board of the Minneapolis Star Tribune newspaper argued that banning drive-thrus would make life harder for busy families and struggling businesses.

Drive-thrus have become a reliable restaurant staple in North America over the last century. In-N-Out Burger claims to have invented the first two-way speaker box at its flagship California restaurant in 1948.

But in recent years, environmental concerns over emissions and the desire to improve quality of life in increasingly dense urban areas have led more municipalities to push back. And researchers have suggested that a ban on drive-thrus could make cities healthier and safer.

A 2018 study published in the journal BMC Public Health by public health researchers at the University of Alberta found 27 Canadian municipalities across six provinces had adopted partial or full bans on fast food drive-thru service between 2002 and 2016.

The bans were concentrated in Ontario, B.C. and Alberta, typically starting in larger cities like Toronto and Vancouver and later implemented by smaller municipalities nearby.

Reasons cited included community aesthetics and safety, traffic issues, litter, noise and concerns about air pollution. None of the municipalities identified obesity and chronic disease as a motivation, but the researchers noted that research into such bylaws could be "a vital part" of preventing chronic disease in Canada.

"Fast food drive-thru service bans are one policy option that may be considered as part of a comprehensive, multi-pronged strategy to promote healthier food environments and improve population health," the authors wrote.

This report by The Canadian Press was first published on Sept. 20, 2019.